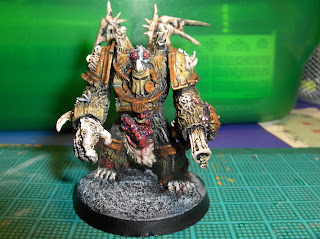 After the ordeal that was moving, I'm very happy with my gaming space at the new house. However, all of that meant that I hadn't so much as picked up a paintbrush (1:1 scale painting notwithstanding) for nigh on four months. So the next order of business, clearly, is getting back to painting miniatures. 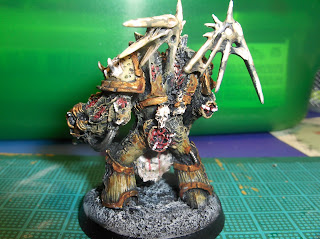 I had this guy primed from before the move so I thought I'd ease back into things with this model. It's a third-party resin piece and I'm a bit embarrassed to admit that I can't remember who makes it! (it might be Kromlech but I'm not sure) Turns out it's a Russian Forge World recaster production facility that retails on ebay under the id bdstd, although this model doesn't appear to currently be for sale. 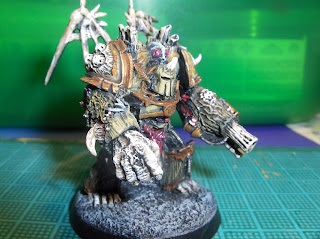 Anyway, I added some skeletal wings from the bits box (from GW's Chaos Spawn kit I think) and painted in my standard Nurgle colours. I think it turned out OK for a first effort back from a long break, and it might see some tabletop action in my Nurgle army as a Chaos Lord or maybe even as a winged Daemon Prince.
Posted by Dallas at 9:51 AM

So that is a Nurgle - awesome! Best, Dean

Awesome job. I love your nurgle