The Winnipeg Warhammer 40K Beer League started way back last September. On Friday, May 31st, the season drew to a close as the 4 semi-finalists and several other folks gathered at Maxx Collectibles for an evening of fellowship and gaming.

The new Codex: Eldar was due to drop at midnight of June 1, so this was the last time I would be playing with the 2006-era Eldar rules. I decided to go with the tried and true mechanized Eldar Swordwind list I have been using over the last several months:

With the advent of the new codex, I won't go into a lot of tactical detail, but shall rather outline the highlights of each game below.

While some pickup games and the other semi-final game went on around us, we played our own semi-final game. Eldar on Eldar action! I figured this was some sort of training exercise, with rubber shuriken weapons and rattan swords.

The four objectives ended up roughly in the four corners. I won the roll to see who would go first, so I decided to go second. Sean deployed his Pathfinder scouts in the northwest corner behind the ruins there. The Farseer and Harlequins set up behind the sandbag defenses to the north. Sean's Dire Avengers, War Walkers and Nightwing fighter were placed into reserve. I deployed a squads of Avengers and a squad of Dragons, in their tanks (with the Autarch in the westernmost skimmer), and the Night Spinner, as seen below. 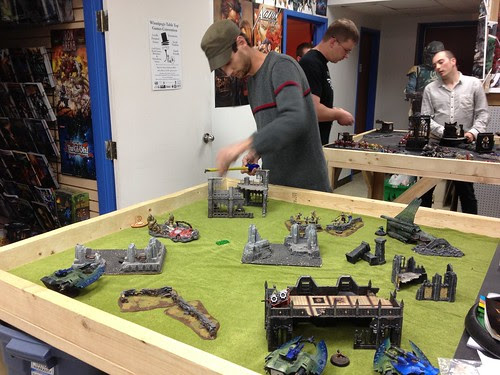 First turn, nothing much happened other than the Harlequins being ensnared in the Night Spinner's web, but taking no casualties. 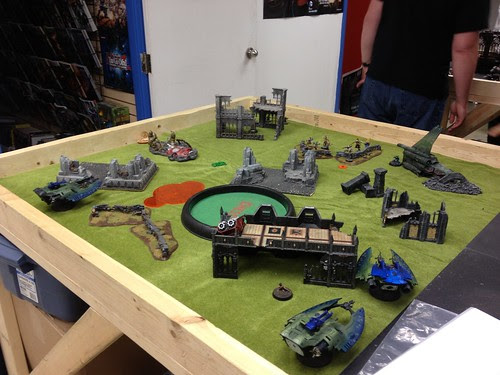 Second turn, Sean really needed for his War Walkers to come on, and for his Avengers to stay in reserves. The opposite occurred. The Nightwing Interceptor showed up, bouncing some shots off the Night Spinner's hull and causing some damage. 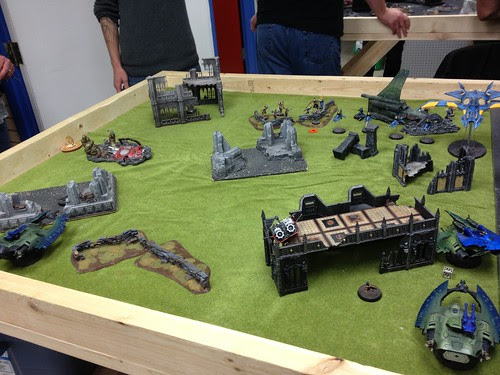 Subsequently, everything else came on from my Swordwind's reserves. I castled five skimmers in the southeast corner, preventing rear-armour shots from Outflanking War Walkers. The artillery tanks laid into the Avengers, killing many and sending the rest fleeing off the table. 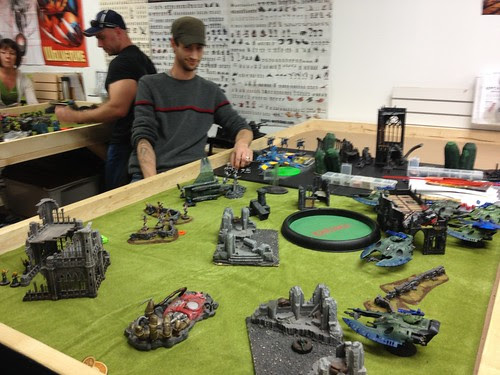 Third turn, the War Walkers came on to the east and the Nightwing moved south. Neither scored a decisive blow with their fire. Massed return fire killed all the War Walkers, and a very (very!) lucky shot from disembarked Fire Dragons nailed the Nightwing plane, its 2+ jink save notwithstanding. 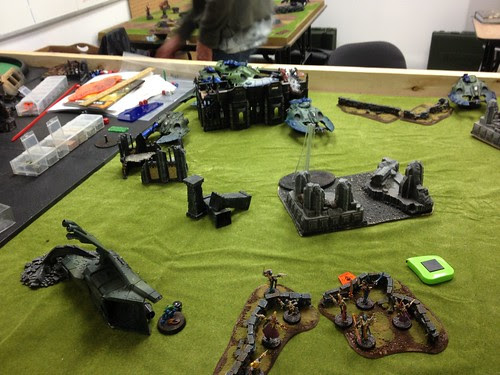 At this point, the game was functionally over, as Sean's forces (with only one scoring unit left alive)had no way to prevent a Swordwind victory. The Swordwind moved around the table, in position to take control of 3 of the 4 objectives. 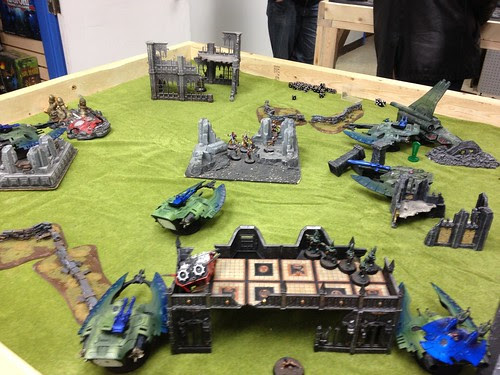 The Harlequins scored a moral victory, destroying the Warp Hunter artillery tank in close combat. At that point, Sean threw in the towel. 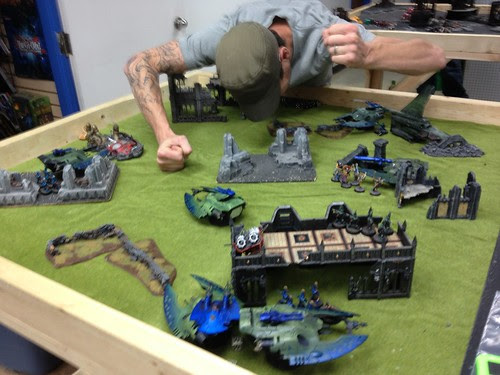 Rob won his game against Greg's Marines, so Rob and I would throw down for the finals.

Over 50 models, including Deff Koptas and an aircraft! Tough list.

We played the Big Guns Never Tire scenario (rolling for six objectives), with Dawn of War deployment. The 6 objectives just fit on the board, in two rough parallel lines of 3 from the northwest to southeast corners. I had two Heavy Support choices (the artillery tanks). They were scoring units in this scenario, but they also gave up VPs if destroyed.

Below, looking north, I deployed the Eldar in a castle formation in the southeast corner. 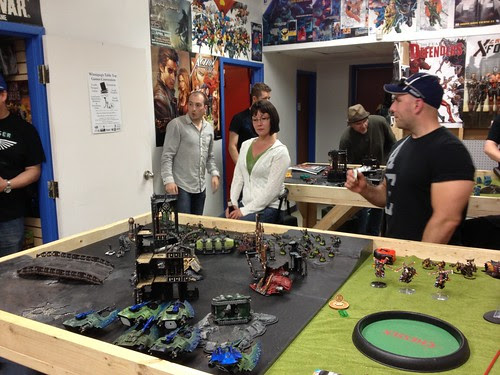 Rob deployed the Orks (except the plane and the Deff koptas) in a broad formation across the northern deployment zone. 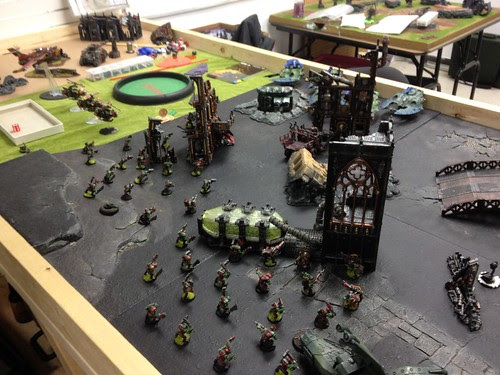 The Orks had first turn, and started by moving the Trukk (with Ghazghkull and the Nobz on board) flat out south. The Eldar maneuvered in response, dismounting the Dragons in the building in the centre. Eldar fire destroyed the Trukk, wiped out the Nobz, and left Ghazghkull with only one wound. 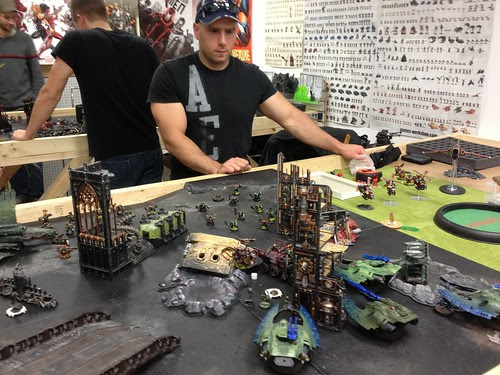 The big eastern Boyz mob moved south to a ruin with an objective inside. The Deff Koptas and the Dakka Jet showed up from reserve, deploying along the eastern edge. The Lootas managed a lucky shot that killed a Wave Serpent. Ghazghkull charged the Dragons, who lost a couple, but their morale held. I moved the Warp Hunter to Aether Rift the Deff Koptas, who all went down in a turn of shooting. 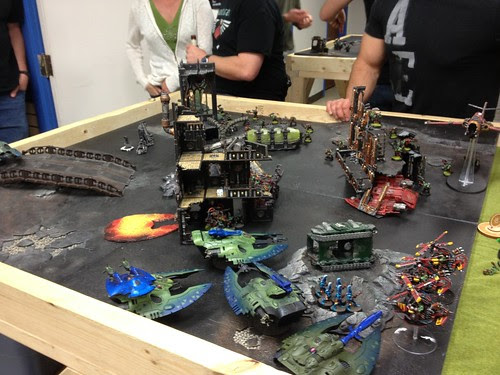 Below, the Dragons can be seen grimly buying time for their brethren. 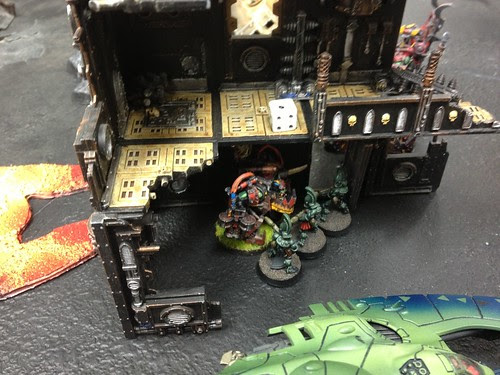 The Night Spinner kept lobbing barrages into the other Boyz mob, who were holding another objective. 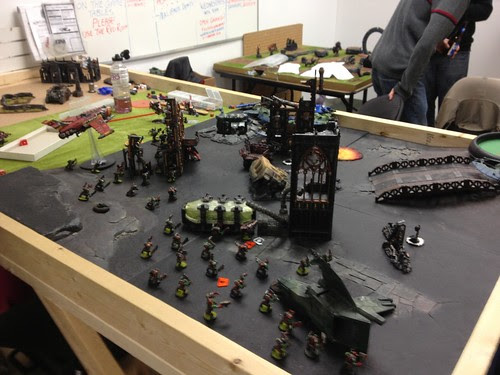 The Dragons finally went down, in the Ork half of the turn. This left Ghazghkull open to Eldar tank fire; he went down yelling curses. 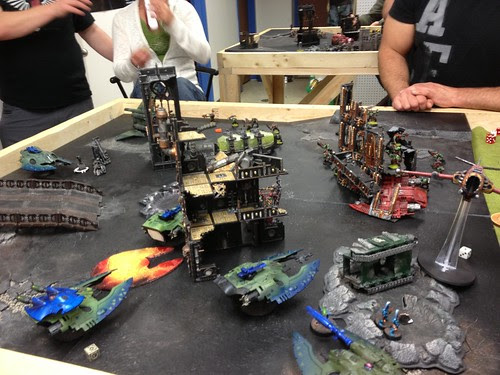 The Eldar tanks maneuvered west and north, to bring fire on the Lootas and Boyz to the northwest. 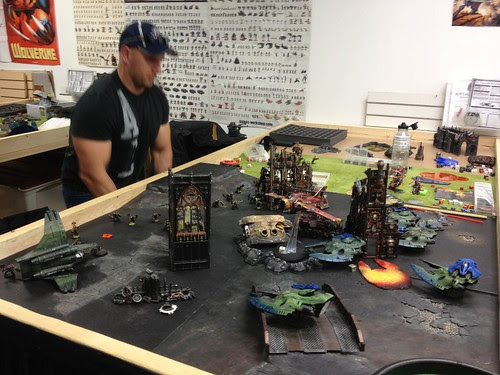 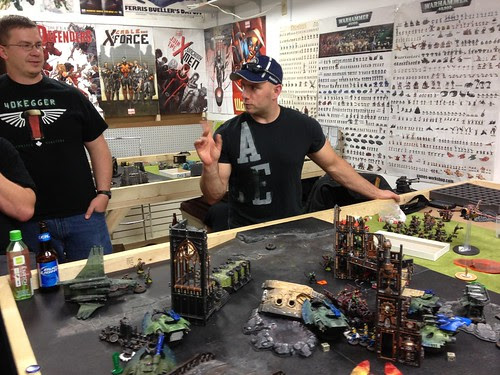 Reduced to just a couple of Boyz, the survivors of the northwest mob tried a Hail Mary move in the 7th(!) turn... 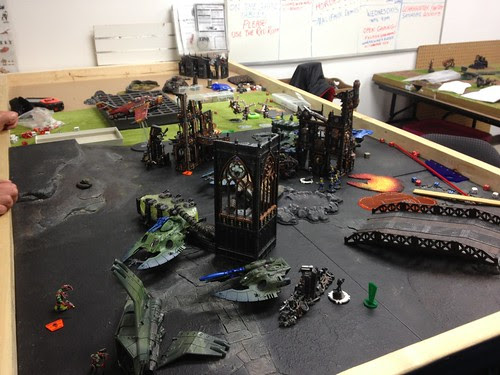 The organizers required a clear winner, so we played an 8th and final turn. The Orks consolidated their positions, whereupon the Eldar concentrated their tanks and wiped out the last two Boyz holding the northwest objective. 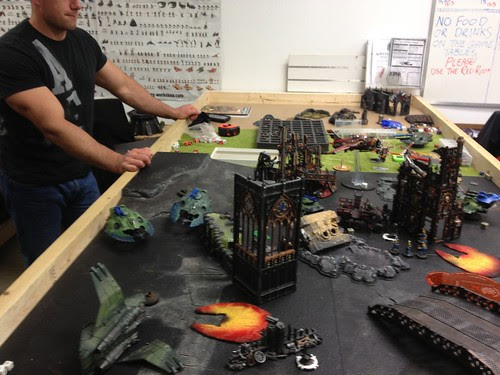 I got to take home a very cool metal and stone trophy. Thanks again to all my opponents over the last 9 months, for tons of fun gaming. 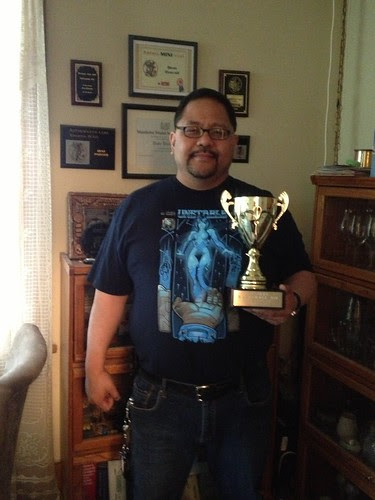 That trophy weighs over seven pounds! My wife's first words when I got home were, "Congratulations! Where are you going to put that thing?"

All in all, I very much enjoyed playing in the Beer League. It provided the participants with the opportunity to play folks we don't usually get to play, and introduced us to some great new beers.

I look forward to what J.P. and Greg have planned for next year!
Posted by DaveV at 11:23 AM