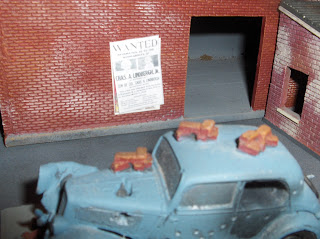 For several years now, I've hosted a New Year's Day game. Taking a cue from our founding Conscript, Curt, my amazing wife Pam also prepares a meal themed to the game. This year I decided to run a 1920s gangster game, so the meal of course had to be "Chicago-style" deep dish pizza! Thanks Pam! 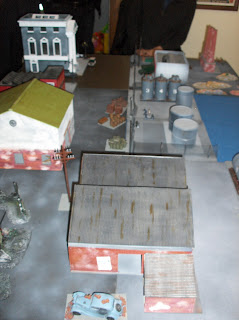 Anyway the scenario was pretty straightforward. I created four gangs with pretty much identical composition - a boss, two toughs, two hitmen, and two mobsters. I placed an objective (the accountant who knows far too much) in the middle of the table, guarded by three cops. They are keeping him safe and awaiting the arrival of police reinforcements (i.e. the end of the game). The mob gangs each start equidistant from the centre - their goals are to pump the accountant for information. Each turn with a model spent in contact with the accountant will gain 1 VP for the mob in question. All VPs count no matter whether your gang is around at the end of the game or not - so no "camping" and waiting till the last turn to swoop in and capture the potato! 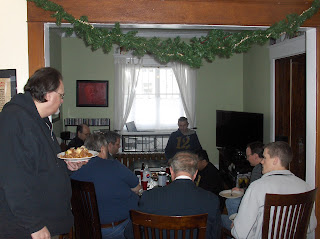 Of course, before the game, we first had some lunch! Conscripts Kev, Bill, Greg, Brian, Hugh, Mike F., Dave V., Perry and Frederick made it out - an excellent showing. 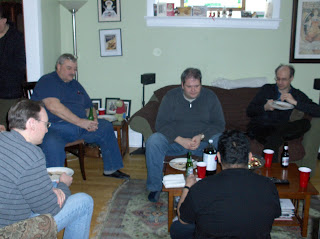 Partaking of some excellent food and beverages... 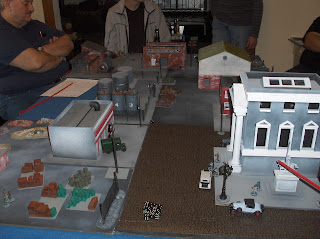 The game begins with the gangs edging towards the centre and the objective. We used the rules mod for "Legends of the Old West" from Wargames Soldiers and Strategies magazine, with weapons ranges standardized and "to hit" rolls improved by one pip, most models hit on a 4+, some on a 3+ (the hitmen). 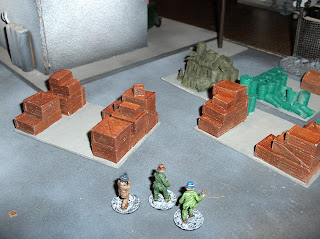 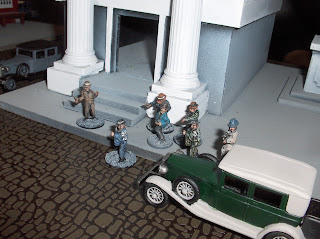 Another group gathers by the bank... 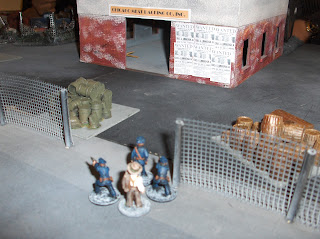 Sharp-eyed readers will note that many of the buildings used in this Chicago waterfront table have also appeared in other games - notably our Stalingrad games. I'm all about terrain amortization, but try to make things reasonably accurate too.... hence I printed out a "Chicago Meat Packing Co. Ltd." sign to go over the Russian "Tractor Factory" sign, and some "Missing Lindbergh Baby" posters to cover up the inspirational (but anachronistic) Red Army poster on the side of the building.

(Accountant and police handlers in the foreground) 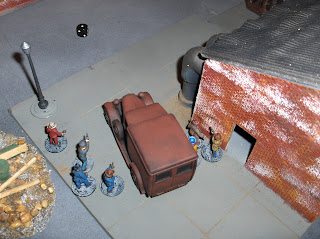 Gangsters take aim at the police... 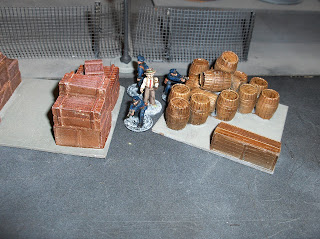 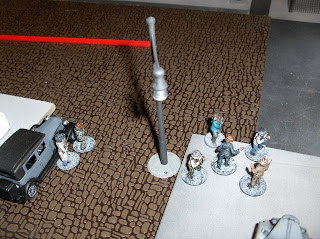 The gangs exchanges fire as they got closer, moving inexorably toward a climactic showdown! 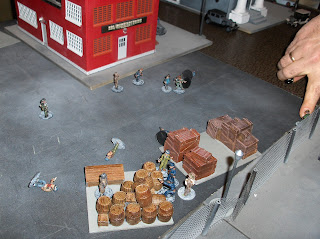 Things are shaping up in the middle as the Southside O'Donnells shake out into a gun line... 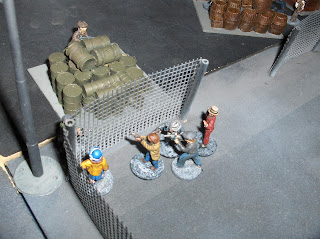 While nearby other rival gangs exchange fire through the wire fence. 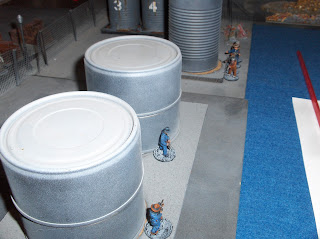 Some enterprising gangsters snuck along the edge of the pier, hoping to get the drop. 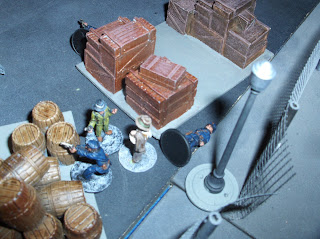 In the middle, one of the Bosses makes the accountant "an offer he can't refuse." 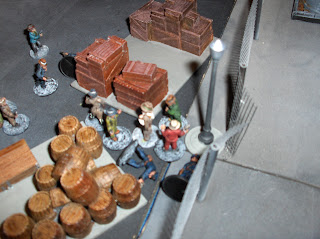 Chaos as the final fight shapes up. 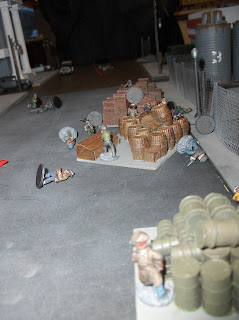 The game ended in a bloodbath, of course, as two gangs bottled out and the two remaining groups went at it until one's morale broke, and they fled.

Had a great time as usual, with fine food, beverages and fellowship. Thanks to the guys for coming out and to those who brought snacks and beverages, an extra thanks. And a very big thank you to Pam for making us all the delicious food! (Dave - I know you took some food pics with your phone - could you post them here if you get a chance?)

Thanks for hosting Dallas. And a huge thank you to Pam for the amazing food!

Sounds like a damn good game and good tradition.

Great looking game and a great idea with the VP. cul