Another one of my Analogue Hobbies Challenge submissions - a series of infantry support weapon teams for the Syrian Army and IDF, additions to my Golan Heights Project.  The main story on the Golan in 1973 was a tank battle, but as always the plucky and unsung infantry played a key part, and support weapons will help round that out. These figures are all 15mm models from Peter Pig, with the exception of the Sagger Missiles, which are from Command Decision.

The Sagger missile teams really help "make" the period for me.  This was one of the early times in which these weapons were used, and took the IDF by surprise.  The missiles were wire guided, and had to be steered on target by an operator.  Accomplishing this under combat conditions (artillery fire, smoke, bullets flying and amid the broken terrain) took intrepid soldiers to say the least.

For the IDF, two .50 cal HMG teams and an 81mm mortar team.  As with my other IDF infantry, these models have Peter Pig "head swaps" - US WW2 helmet troops on to the bodies of models from the Peter Pig "professionals" - to try and match the period look of the IDF. 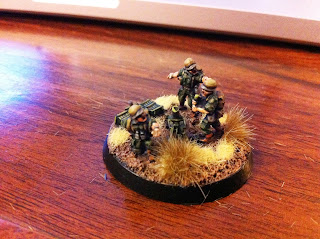 These weapon teams will round out the infantry for my Golan Heights collection. Now - more vehicles...stay tuned...
Posted by Greg B at 11:00 PM

These look amazing! I can't wait to see more of this stuff and the battle reports to follow. It looks like way too much fun.

Love the bases, they really stand out.

Very nice, the bases are brilliant