If you are going to have a downed Soviet helicopter crew, you might wonder how they got that way.  Eureka miniatures has an answer - a 28mm Mujahideen fighter with Stinger missile.  He is another entry into the Analogue Hobbies Painting Challenge.

During the Soviet occupation of Afghanistan the Mujahideen greatly feared the Soviet Hind attack helicopters. The Stinger is a US man-portable SAM system quite useful for shooting down such helicopters, and as the US started to increase their support to the Afghan rebels they started shipping the missile systems to the Mujahideen. 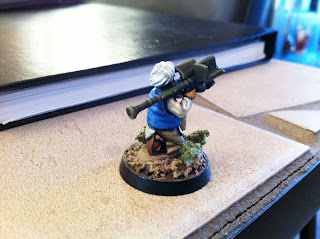 This fellow should help keep the Hinds at bay when we play a game set Afghanistan again in the future.
Posted by Greg B at 4:30 PM