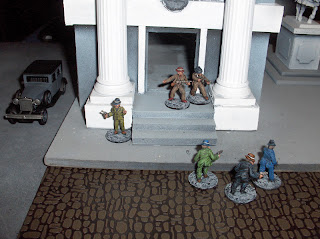 For last night's game I decided to debut the Citadel Gangsters I'd painted a few weeks ago. I'd finally sourced and repainted some excellent Lledo "Days Gone" cars to go with them (one seen at left above) and this was the last element remaining before we could have a game...

Rules used were found in a back issue of Wargames Soldiers and Strategy magazine and based on Warhammer Historical's "Legends of the Old West". I wanted a multi-player game so I came up with a simple scenario set in the seedy dockyards of the Big City. The Italian Mob and a Scottish gang known as the "Sean McSeans" are bitter rivals in the illegal liquor trade. Unbeknownst to each other, each gang receives a tip... there is a cargo truck full of illegal whiskey at the pier. Unfortunately, the truck has broken down, and each gang sends a "delegation" to secure the goods and wait for a commandeered tow vehicle to come pick up the truck. However, the local police precinct is also in on the secret, and a crack unit led by the Commissioner and a Special Agent is also on the way to secure the booty... 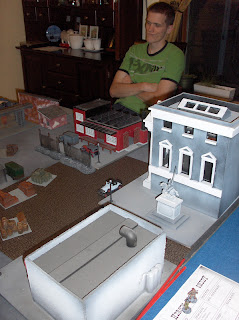 Conscript Mike appears unimpressed with his lot as Police commandant... 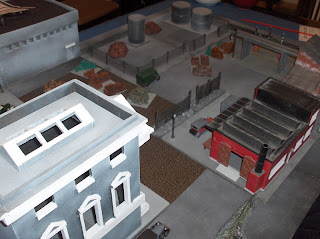 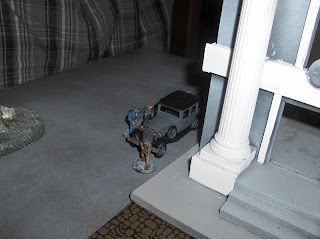 ... and they proved somewhat unsatisfactory. What happened was that Brian ran his gang in a very "meta" fashion and sat back, waiting for the other two antagonist gangs to destroy each other. Long-time Conscripts will recognize this as Conscript Sean's favorite tactic for multiplayer games - a tactic which was as successful as it was infuriating ;-) 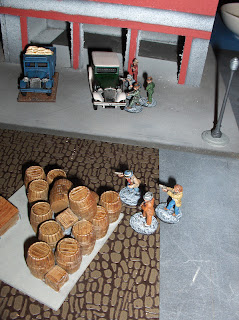 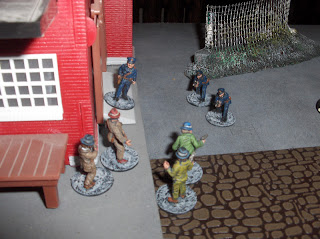 The main problem with the rules, however, had to do with the effect of shooting. Or rather, the lack of effect. Most of the figures had a "Shooting" value of 5+ on a d6, with a few at 4+. When combined with the copious cover provided on the table and the short ranges of the weapons (typically 12"), this resulted in shooting having little effect. Bizarrely for a game so evocative of wild gunfights, "gats" and "Chicago typewriters", the antagonists had to close to knife range in order to effectively engage their rivals. The mental image of gangsters throwing aside their Tommy-guns and pulling out brass knuckles to decide things was jarring, to say the least. 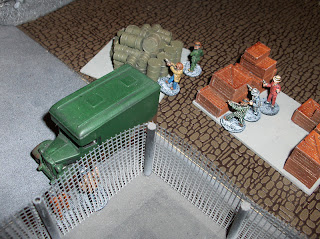 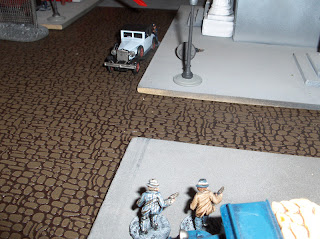 Brian won the first game after Dave V. and Mike's gangs basically stabbed each other to death. However, that game didn't take long, and we identified the problems with the rules, so we decided to play again with a quick fix - shooting values improved by one pip across the board and gun ranges standardized to 12" (24" for the cop rifle). 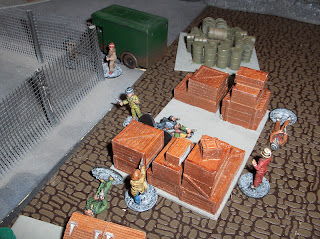 Brian turned over the McSeans to me for the second game, Mike kept the cops (unwillingly) and Dave played his Italians again. The second game was much improved. Close range firefights abounded and the atmosphere was most evocative of the era. In the picture above, my gang and Dave's get to grips at short range with a gun battle over some crates (literally) - the objective is the green truck at upper left. After a turn of that there were 4 dead gangsters and an impromptu truce called in order to address the coppers... Dave had to go home a bit after that so I took over his gang too. The uncomfortable possibility of me having to fight myself was avoided when the remnants of my own gang failed its bottle check and fled the table, leaving a couple of Italian die-hards to sweat the heat. The forces of law and order prevailed at last as the Italians turned tail.

The second game was really fun and tense, I think the slight rule mod made a big improvement. Goes to show that when it comes to game design it can be the smallest things (like one pip!) that make the biggest difference.
Posted by Dallas at 4:56 PM

So what you're saying is that Brian is a camper? Nice read boys!

Super game! Like the painting of bad and the good guys..

I guess you could use the same basic rules, but switch from D6 to D8 for the shooting?
nice write-up and great pics

A nice article! Thank you, I'm glad we inspired people to play games. I was particularly proud of that issue.

I quite agree with the house rules, gangs start off in Legends of the Old West as fairly weak and improve with experience but for one off games your solution is ideal.

That's an excellent report, most inspiring!

On the shooting, that is an excellent compromise for one off games. For campaign games, LOTOW starts out low as the 'gang' will improve between games.