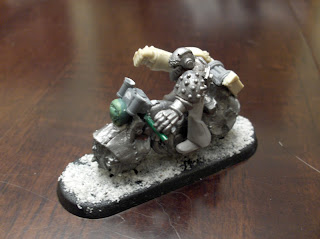 After an exciting game against Greg's Tau a couple weeks ago, I've been blasting away at some reinforcements for my Howling Griffons Space Marine army. The army is "all metal" and consists almost exclusively of models from what is for me the Golden Age of Citadel Miniatures - the late 1980s. I make a certain exception for the new Land Raider Armoured Proteus from Forge World, of course, and wouldn't discount the possibility of adding a Contemptor dreadnought or the like, but as far as the army goes, I like to field essentially what could've been on the table in the early days of Rogue Trader. 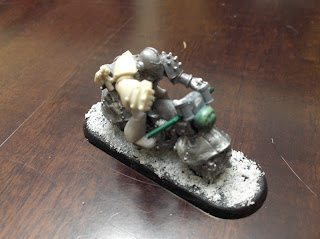 Which brings me to this update... a few months ago I found an incomplete Space Marine "Black Shadow" bike in a bits box at the FLGS. Bought it for cheap (as you do) hoping that I'd come across the bits required to complete it. I've now given up hope that this will happen and resolved to scratch-build the required parts. 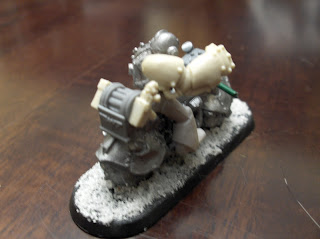 You can see half an ammo drum on the back, with an Imperial sigil plate (part of an IG ammo box I think) along with the rider's holstered bolt pistol and an ammo pouch. 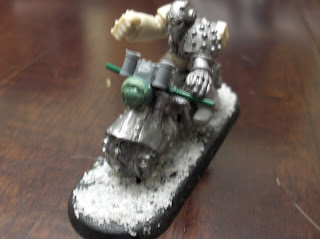 At the front I used a piece of thick florist's wire for handlebars, and cut up a smoke launcher for the gauge pod. A launcher barrel was placed on either side of the pod (brake and clutch master cylinders, maybe?) and a headlight bucket was made of greenstuff. 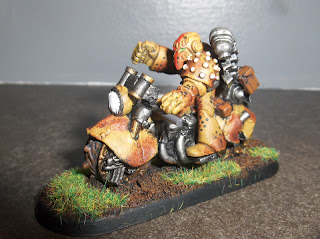 Here's the finished model - the mounted Captain with power fist. I was torn between whether to give him a bolt pistol or the power fist... my wife thought the fist looked tougher and I agree ;-) 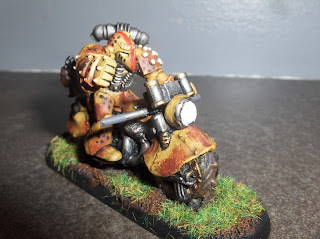 The model was painted in my standard HG scheme - Iyanden Darksun and Dark Flesh camo, washed with copious Devlan Mud. Metal parts are Boltgun Metal/Badab Black and gold craft paint/Devlan Mud. As these models were sometimes known in the catalog as the "Vincent Black Shadow" I added tiny tank badges on either side. Headlight is just white for now - any ideas on how to finish it?? 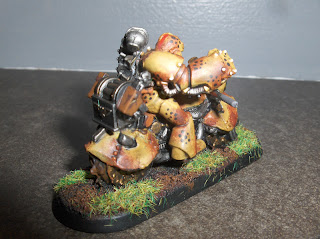 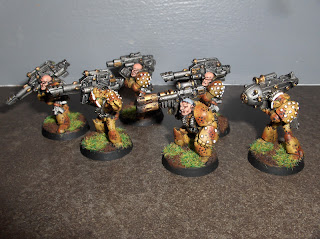 Also on the table were a bunch more Griffons infantry, all painted in the "Sigmar VI Insurgency Force" camo scheme. Certainly enough lascannons here to wipe the smile off a Guard tanker's mug... 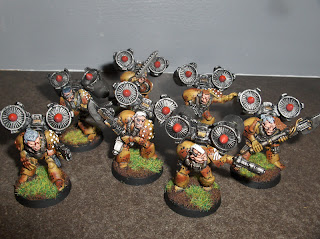 Next is an assault squad with jump packs from Maxmini.eu. I dig the huge turbofan look. These guys are considered to be armed with bolt pistols and close combat weapons, and one plasma pistol and power fist. 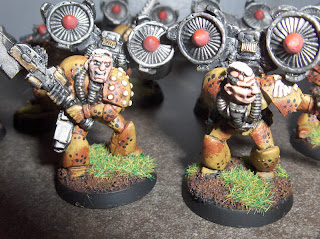 Even painted the eyes on a couple of these frothing maniacs... 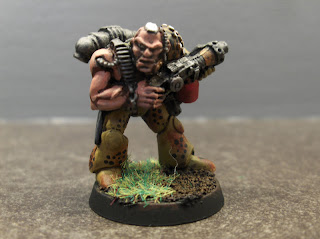 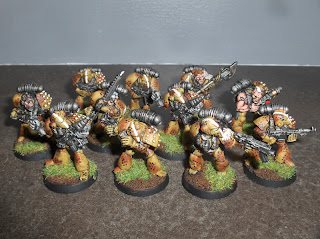 A group of regular grunts armed with bolters and autoguns (!) plus the previously pictured flamer. 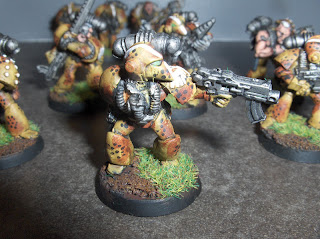 This is a conversion of the mohawked assault trooper with the plasma pistol shown above. His head was replaced with a plastic RTB-01 "beaky" helmet and the hand flamer swapped out for a bolter from the RTB-01 frame - thanks Greg! 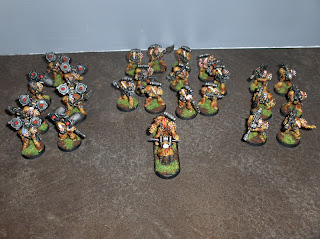 The newly-recruited reinforcements en masse, ready for a progenoid-gland inspection. They need to have their Griffon shoulder pad decals applied but are otherwise ready for battle. 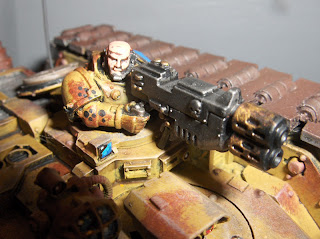 I also painted a couple of crew figures for the Land Raider. Above is a modern Marine crewman with a pintle-mounted multi-melta. Crew figure and weapon are one piece and lift straight out of the cupola. 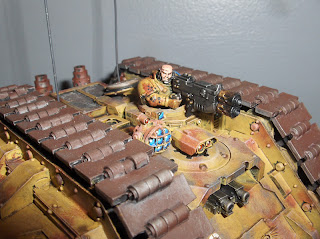 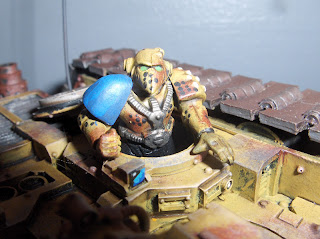 If I want to go old-school I can use a plastic Marine crewman I converted. 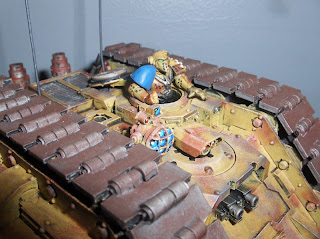 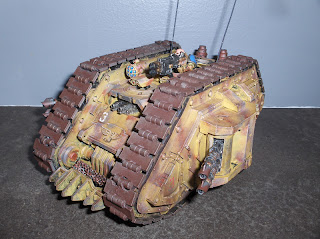 Ready to rock and roll - maybe it will last longer than one turn in the next game???

Anyway, that's the 40K update for now. I've got two more Rhinos primed and ready for the paint shop, and a Razorback turret is on the way from Puppets War to finish, and at that point I reckon the army will exceed 1500 points easily, maybe even 2K.

I know that the army is by no means "optimized" (not a meltagun to be found, sheesh) but I just love the character (and heft!) of the old metal RT models. Even if it's not super-competitive in today's 40K scene, at least the army looks cool and is different, and for me, that's what the 40K aesthetic is all about.
Posted by Dallas at 10:25 AM

I think these are the best models of Citadel. Sadly, they don´t think the same.
Very nice painting work.

Thanks for the comments guys! I'll post some "full army" pics with the Rhinos and a Landspeeder once they're done.

Great stuff Dallas. All those heavy weapons will come in handy against cheese bag Tau suits (as in mine).

Looking good. Some really fine additions to the army.

Awesome to see the old RT models painted to a modern standard!

Not sure if you know, but in picture 12, the marines holding the triangular/pointed ended weapons across their chests, are infact needler rifles.