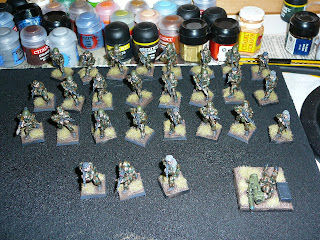 I've taken a break from 15mm stuff and decided to complete an old project. I've had modern Russians sitting around for a few years now. I originally collected these when the group was in an Ultra Modern kick. I think this was quickly followed by something else and the Russians were set aside.
I have a few vehicles from Imprint with a few more on the way as well as a 1/48 Hind. The above models are from The Assault Group. The model holding the ATGW was originally a machine gunner who was converted with a Space Marine HK. The weapon looks close to the actual ATGW the Russians use - the Metis-M. Hopefully I can finish the vehicles soon and we can demonstrate a platoon level skirmish of our fictional (hopefully) conflict with NATO.

Dude! Great job. Are there some BMP-3s in the future here?

Just need some figs that can stand in as Modern Poles....

Very nicely done. Hoping to see more of them in the future.

Oh, I'm digging them! Makes me want to dig out my TAG Soviets and get them combat ready.