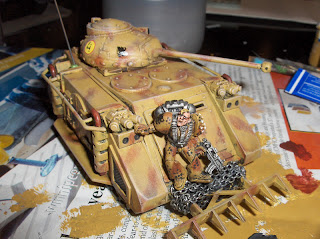 Just a quick post with some pictures of a new vehicle for the RT Howling Griffons. I painted this one at the same time as the Land Raider Armoured Proteus and it first saw action recently against Greg's Tau. The model was obtained in a trade with Conscript John C. along with two other RT-era Rhinos. John took immaculate care of these models and they came with all the stock parts including the nigh-unobtainable side rails!

I had a Predator metal chassis top in the bits box so I thought it would be cool to create a Predator that could be converted back to a Rhino if desired. I didn't have a Predator turret, but was able to obtain one off eBay for a couple pounds. It didn't have a floor piece, main gun or hatch. The turret floor I made out of a 40mm wood Litko base, filing it to fit and smoothing the gaps with greenstuff. Rivets were also made of greenstuff. I attached a round peg (actually a piece of hot glue gun gluestick) to the bottom of the turret to fit into the hole in the chassis top plate. The main gun was built from a piece of plastic rod I had around, with the muzzle brake made of greenstuff. Turret hatch was a standard 40K tank piece from the bits box.

I didn't glue the chassis top plate to the hull but rather, left it as a friction fit. I also painted a set of standard Rhino top hatch doors and can swap these in if I want to field the model as a standard Rhino instead (see bottom photo).  The model was weathered with powders and decals applied from Ginfritter (griffons) and an old Skif T-64 kit. Once I get my Tamiya mud stick I might slap some of that on too.

I'm considering getting a twin-lascannon mini-turret to be able to field this as a Razorback also. I know Puppets War make a nice piece for about 7 euros that would do the job. It's all about flexibility! 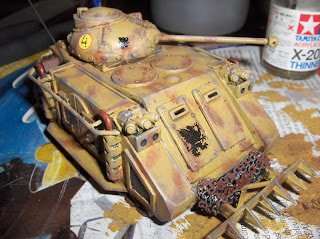 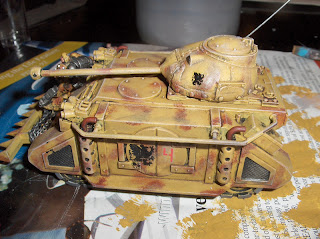 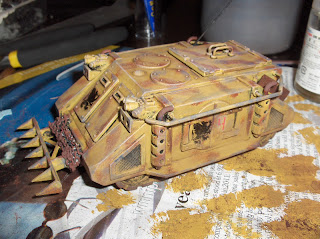 Looks great dude.
Will you bodge some sponsons?

Nice job. I really love the design of the original predator.