Another chunk of Syrian stuff - a platoon of BTR-60s from Old Glory and a solitary T-55. 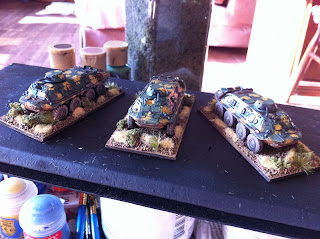 The BTR-60s were very, very nice models. They assembled smoothly and have a lot of detail on the hull in particular.  They are excellent renderings of this common Cold War era Soviet APC. 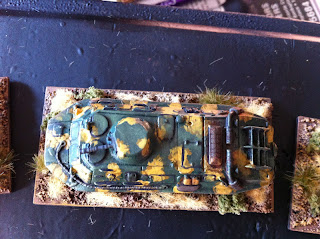 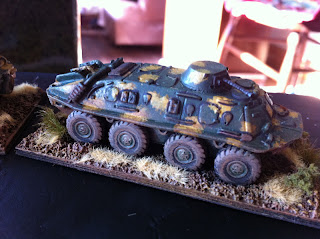 This T-55 is a "newer" one from Peter Pig - they have corrected issues on the barrel of the main gun, putting the fume extractor on the correct end of the barrel. 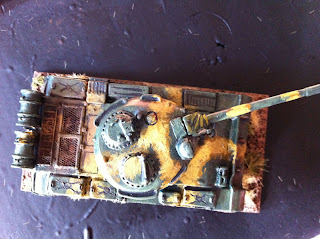 The Peter Pig vehicle castings appear to be on the larger end of the 15mm spectrum - when compared with the T-62 from QRF, the Peter Pig T-55 is actually a little larger.  But it will all be fine on the table.
I have half a company of T-62s and T-55s finished now - will want to get to at least a company-plus-command (about 11 tanks) of each.  Will need to make another order on the T-55s, but I believe a package of QRF T-62s should be along soon...
Posted by Greg B at 7:00 AM

Can't wait to give this a go. What rules were you thinking of using for them, Greg?

Peter Pig have just (Sept 2012) updated the T55 kit to include crew, one of whom has a rather nice 14.5mm mg in front of him. Worth a look if you haven't already purchased all the tanks you need.

Thanks Gary - I had noticed the newer T-55s at Peter Pig and wondered "WTF?" - the newer tanks look a lot nicer.

Curt - I am hoping to use an adaptaion of the new "Bolt Action" rules.