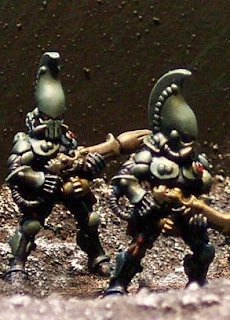 Here is the new teaser trailer for what I presume is Warhammer 40K, 6th edition (thanks to Mike D for the link).

The 5th ed. rulebook has not been available for sale from the GW website for a short while. However, there`s been no official statement regarding 6th ed. until now. If this follows previous GW marketing efforts, will June 23 be the date when we can pre-order the new rules, which would be released a couple of weeks later?

I admit that I am somewhat disappointed in the lack of real info. I don`t count all the various spoilers that have been floating about the internet. I have not seen a proper, coordinated marketing campaign.

Some questions for the peanut gallery:

It is the 25th anniversary of 40K; I`ve been really looking forward to the release of 6th ed.

The release of new core rules is  of not-insignificant interest to me. I play a lot of tournament 40K - besides local events, last year I set aside time and money to travel to events in Vancouver and Las Vegas.  How will my Eldar Swordwind work under the new rules?  How do I need to modify both my strategy and tactics? Should I change up the new Crimson Fists army I am painting? What new models will I spend my hard earned dollars on? I just want to get a handle on the game I shall be playing for the next several years.
Posted by DaveV at 9:04 AM

I was chatting with the guys at Warhammer World when I went in to pick up some paints, and apparently it's all to do with getting the rights to do miniatures for the Hobbit.

Essentially, New Line don't want any pre-movie spoilers, and have said to GW "if you can't guard your stuff, why should we trust you with ours?"

Therefore, GW are being super close-mouthed to prove to New Line that they can both sculpt Hobbit models and not spoiler the films.

If all news releases of information are authorized releases (i.e. no `leaks`), should that not be enough? Even New Line has been releasing official photos and short scenes of the upcoming movie. Up to now, there`s been no buzz generated at all for 6th ed.

As for players, I am watching some people who are trying to extend the life of 5th ed. with rules additions. Others are creating alternative rules engines and background for the use of 40K figures.

Arguably, as other bloggers have pointed out, the real competition for GW isn`t Privateer Press or Battlefront, but rather xBox and video games in general. There`s only so much discretionary spending to go around.

Personally, I think it's ridiculous to have black outs. I can see GW being restricted from showing Hobbit models. The Hobbit has nothing to do with their other games, so I don't buy it. Also, they proved able to keep a secret when they did the original LOTR lines. I think it boils down to GW being greedy once again. With all the other companies producing bits and units for GW armies, they are simply trying to cut them out. Really, what's the big deal if you let people know what's coming? Honestly, this business practice is foolish. How can you save up for anything when you never know when it will be available? I fail to see how it creates interest. Really, how many people are going to save their hobby money "just in case" GW puts out something they want? I think that hobby money will get spent on other things. So, along with the gross annual price increases, GW is shooting themselves in the foot.
All that aside, I am curious to see what they've changed. I hope the rumors are true that they've gone back to a more detailed set of rules. The wound allocation rules that are being reported sound great, with wounds allocated to the nearest models rather than it's current incarnation. Well, June 23rd we'll find out when we can get it. Also, I am excited about it being Dark Angels and Chaos in the starter(if the rumors are to be believed). Hopefully that comes out next month as well.

Apparently that's the point: they aren't trusted to even *make* Hobbit models until they've jumped through New Line's hoops.

Not that I agree with any of it, it's complete foolishness in my opinion, especially when people are already invested in a given system. Imagine if WotC had released D&D 4e with nary a warning!

The blackout is really annoying.

I like getting hyped up for stuff, especially my hobby. I just don't think GW is making very good decisions lately.

I loved the old "Incoming" messages. At least you knew something was coming in a few months.

There is definitely a lot of anticipation mixed with scepticism right now. I mean, what kind of game is coming? Like most people, all I can think about is what will happen to the armies I lready own. That's lots of time and money invested that can easily be altered with the release of a single book.

I think that this is going in the clear direction that GW has been going for years.... Solid forethought and product management... Just like Selling off Dark Heresy after it sold out but before it was released...
Remember this is about selling product to GW so they blackout to sell off product in stores to new people, ie they don't want people saying 'yeah but the new book and figs come out in two months'
This makes sense as they primary market is tweens who haven't played before. They aren't worried about gamers who are in the hobby, not unlike a drug dealer, they know you're hooked, they only care about new clients.