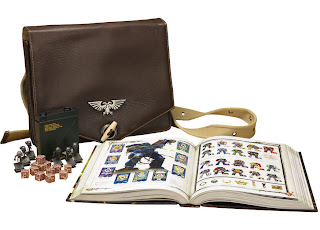 I'd like to start a conversation here regarding the changes to Warhammer 40K that are imminent with the sixth edition, to be released on 30 June.

Everybody's well aware, I think, of most of the main changes - the return of overwatch, Warlord traits, allies, taking fortifications as part of the army list.  But one change that surprised me is, in my mind, more fundamental to the way the game plays than any of these.

It's casualty removal. Remember how the sergeant or the guy with the power fist is always the last of the squad to die? Well, unless you deploy your squad very carefully this might be a thing of the past. From now on, casualties are removed from the front of the squad, presumably starting with the model closest to the firing enemy unit. (Although I've not seen the actual text of the rule, it's confirmed by mention in several places in the latest White Dwarf).

I like the thinking behind this change. However, I also think it's going to lend itself to some very gamey tactics - that is, if you remember the rule as you're moving your squad! Players will be careful to have a lasgun-toting grunt a few mm in fronto of the meltagunner. And if the rule is forgotten, and a number of models appear equidistant from the shooter, this could cause friction in the game and, at the very least, one of the ubiquitous "50/50" dice offs that 40K practically introduced to the gaming lexicon.

I can also see a pretty serious "transition" period where this rule is forgotten, or selectively remembered by the shooting player ;-)
Posted by Dallas at 10:24 AM

At first I didn't like the new rules for casualties, as, you mentioned there could result some wonky practices by players gaming the system.


Yet, over the weeks the idea has grown on me. I believe as a result of the rules change players will 'bubblewrap' the most important models in a unit; throwing wounds around a melta gun, placing Sgt with powerfist in the rear of the unit, etc.


Akin to your idea of wound allocation, it would seem that there are times when shooting models are able to choose wound allocation. In fact, one rumor suggested that this may extend past sniper units...interesting times- I guess we will know all midnight Saturday!

Is Overwatch actually back?

Dallas your post highlights a great example of classic 40k tinkerage - fiddling with the things that were not broken, or at least were hardly the biggest issue in the game.

Were all the 40k players out there clamouring for this change? No? In GW's mind then, "Let's do it." Similar to the thought-fart canyon that churned out "true line of sight".

Will it do anything other than make things more gamey? And why be so precise on this issue (the closest models first) when so many other things are abstracted...

Alas - I am a poor person to start this discssion, as I feel the 40k rules have been awful at an overall perspective for some time, and only blowing them up and starting largely again could convince me they wanted to have good rules.

But perhaps this edition will make them playable and fun again! Cue Kent Brockman - only time will tell...

I disagree Greg B. When my opponent can drop a demo charge on top of my deepstriking unit and hit every single one of them yet I can (thanks to lasgun shots from the same enemy unit) put all ten of those hits onto just five models there is definately something wrong with wound allocation.

All ten of my guys should've been fried. Not just half of em.

@ Gonewild - I don't disagree with you at all. I think that it's a good idea to have casualty selection out of the player's immediate control. I can't imagine a Guardsman thinking that the safest job in the squad is to carry the meltagun... it doesn't make sense that the HW trooper is always the last to die. It's just that there may be more elegant and non-abuse-prone ways to do it... as Greg alludes, so much of the game is (or was) abstract anyway.

@Greg - overwatch is indeed back, but really in name only... it's a shot taken at BS1, targeting charging troops as they rush in.

Ah - so Overwatch actually is not back at all then...that figures...

@ Lead Leagion - respectfully, I find the situation you describe as fairly unusual in a 40k game.

This situation you describe involves an area affect template, as opposed to the effect of ranged shooting. I am a believer that things under the template should be zapped by it - but you can do that and still avoid gamey casualty removal from ranged shooting.

But even if it is quite common (and I will defer on that, as I don't play that much 40k any more - perhaps other players will join in), is this the one thing you wish they addressed in the rules, as opposed to the other gaping issues in the core of the rules engine?

I'm not sure, but I have memories of taking off casualties from the front of the unit in earlier editions. Perhaps second or third edition did that?

Or perhaps my old gamer brain just muddles up the memories of other games into my 40k memories. Anyone else have any recollections of this?

You make a good point there Greg, there are lots of gaping holes in the system. But wound allocation is the one that's been causing me the most headaches.

The way I would handle two figures in the target unit being equal distance away from the nearest firing figure is to see which one is nearest the next closest figure in the firing unit...