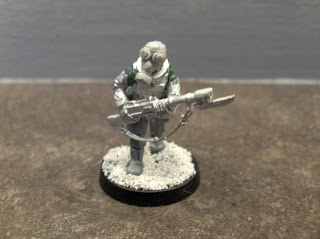 One of my longer-running ongoing projects is a 40K Guard army that has been in the queue since (apparently) 2009... ack. So far I've gotten one squad of Renegades and two Leman Russ tanks painted, and some Death Riders assembled, but that's about it. 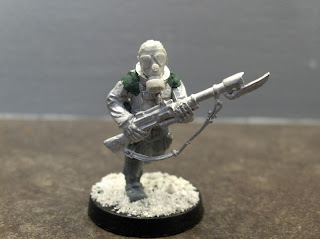 However, a post on TMP or some such ignited the fires of creativity (acquisition) anew when I spotted the very nice Victoria Lamb conversion kits for GW's Imperial Guard. Aha! Penal Legion troopers to go with the Renegade Guardsmen! 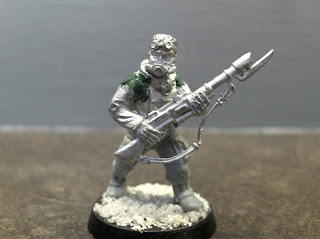 The conversion parts you get in the Penal Guard Squad kit are lovely - torsos, heads and weapons with attached arms. The last is particularly applauded by me, as one of my pet peeves is figures with separate hands and weapons... no matter how carefully you place the weapons in the hands it always looks awkward, like the model has wooden prosthetic hands that can't quite grasp the weapon. 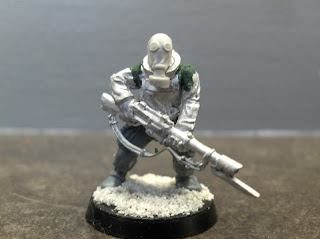 Kit quality was great with nary a bend in the white metal parts. Fitment was also rather good for the most part, with joins disguised with GW's new Liquid Green Stuff. 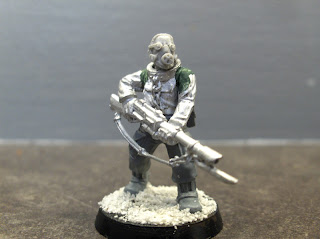 You might notice that some of the heads are different - not willing to leave well enough alone, I mixed in a few of Maxmini's Tox Guardsman heads I picked up at Salute. 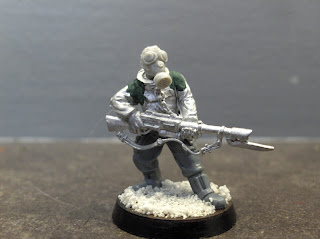 While expensive, the Maxmini heads are amazing little resin sculpts that reflect the hapless character I love in Imperial Guardsmen - especially Renegades and especially especially Penal Legionnaires. How much more hapless can you get than that?? 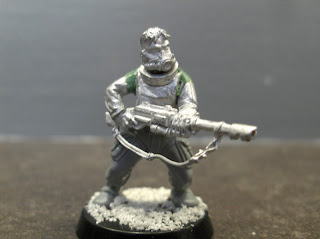 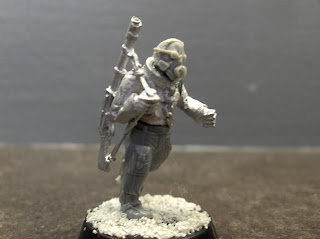 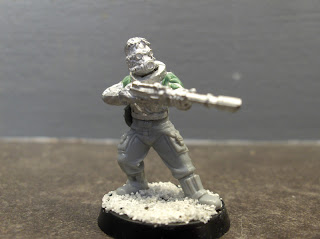 The only GW part left on the models is the legs - I used plastic Catachan legs and I think they work perfectly. Oh, those and a sprinkling of IG equipment on the belts - a few canteens, ammo pouches, combat knives etc. Penal Legionnaires are not very high up on the Guard logistics chain ;-) 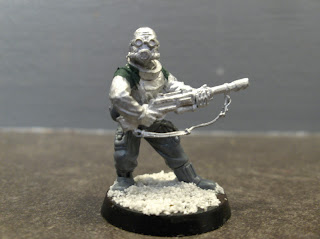 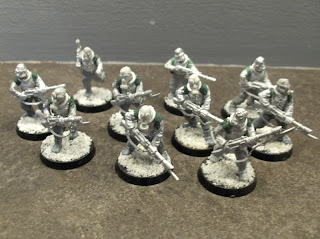 The completed squad of 10. For colour scheme I am thinking hi-viz prison orange... the torsos have these cool "number patches" across the front and back... I have some fond memories of these guys from childhood comic book reading... 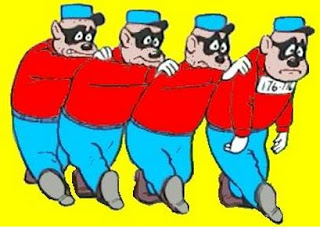 Victoria Lamb certainly does make some lovely pieces. When I'm out of stuff to paint, I plan to make a big order from her site.

Your traitors look great, excited to see some paint on them!

They are pretty hapless.

Great work, Dallas. I particularly like the addition of the Tox heads. They give the squad a real nihilistic flavour.

I didn't know that Victoria Lamb was doing parts - very nice stuff, though I do despise the quasi British Colonials (Captain Caine indeed...).

How was the green stuff to use?

I wait with bated breath for that day (and a hammer). ;P

Did someone say there was hammer work to be done!

I was trying to find a contact area on your blog but failed. Would it be possible to get a contact email address?

Hi Brent, if you like you can email me at dgewen_at_hotmail_dot_com(remove the underscores)