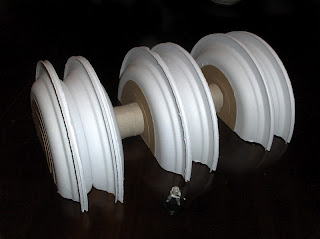 Readers may recall the Star Wars "Hoth" game I ran in February. I speculated in the blog entry that I might take it on the road to PrairieCon, a local game convention that I've been attending and running games at for almost 30 years (yikes). Well, I've committed to running it at PrairieCon, and will be joining Conscript Greg B. there this weekend... he will be staging his impressive "Robotech" game at the con as well. 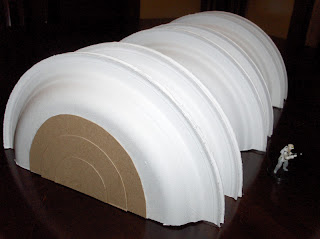 I figured it might be a good idea to build some more terrain for the game as the table was a bit sparse. I'd seen somewhere on the interwebs that someone had built a Hoth shield generator out of paper plates and this appealed to both my modelling sense and my budget ;-)  So I dug out some Royal Chinet and gave it a go... 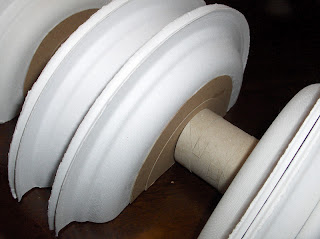 I cut the plates in half and glued them together using white glue. Detail was added with semi-circles of card cut from a cereal box, also attached with white glue. 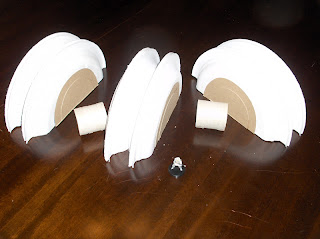 A toilet paper roll was cut in half and detailed with some off-cuts of card, to serve as the "connector" for the generator units. A 28mm Rebel soldier is included for scale. 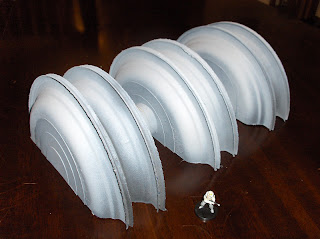 The model was sprayed with Krylon flat black undercoat and then hit with a cheap primer grey spraypaint. 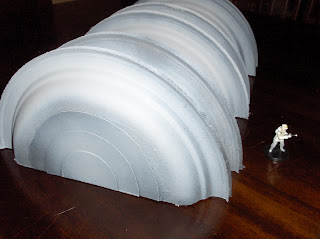 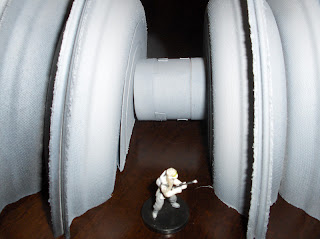 I've left the model in five parts, for flexibility in use as well as ease of transport. I think it will serve well in the Hoth game as well as in our other 28mm sci-fi gaming. There's always room for a shield generator, right? ;-)

I second that "Sweet!"

Where do the 28mm SW figs come from?

Thanks guys! Wish I could say it was my idea, credit to the Internetz... anyway Tamsin - the figures we are using are the Wizards of the Coast "Star Wars Miniatures" prepaints. The range was massive (albeit discontinued in 2010) but many are still available from comic/card shops and eBay. Commons (like stormtroopers etc.) are generally cheap, rares (Boba Fett etc.) can be $$$...

Awesome stuff dude. As you say, the need to destroy shield generators is a constant problem in any sci-fi game!