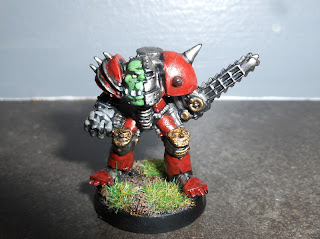 I'm sure everyone remembers that lovable fellow, Thrugg Bullneck, chief criminalist in his band of Space Ork Raiders? Unfortunately Thrugg didn't fare so well in the initial game in our 25th Anniversary Rogue Trader campaign, the Battle at the Farm, ending up a casualty at the hands of Captain Cantor's Crimson Fist Marines. 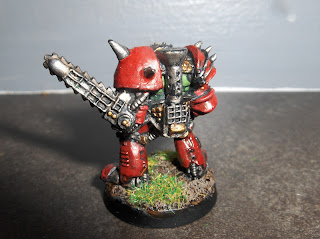 Fortunately, Rogue Trader being what it is, Thrugg was merely seriously injured in the skirmish. Of course, with enough Teef, any self-respecting Ork warlord can consult a Doc and get himself cybork-ized. So while some of Snagrod's other forces were fighting Space Marines and Guardsmen on the outskirts of New Rynn City, Thrugg was "otherwise occupied" being augmented with a chainsaw arm and 'ard 'ead (among other, erm, "enhancements"). 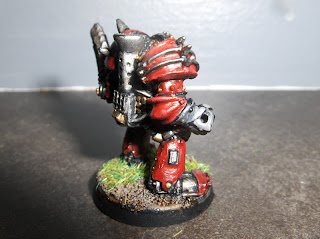 I obtained this model by a happy accident - it was a throw-in with a bunch of Fantasy orcs I bought in a job lot on eBay. I really couldn't have picked a better model for Thrugg 2.0 - the original Thrugg was a chainsword-wielding maniac as well, so I figured that the Doc would just weld the sword on in place of Thrugg's original arm - whether it had been injured or not! I'm looking forward to seeing Thrugg 2.0 test his "metal" against Pedro and Co. in the next campaign game!
Posted by Dallas at 10:29 AM

That will be PERFECT for Thrugg 2.0 - I'm sure he will be looking for revenge...

Nice work on that, Dallas!

Great stuff. I've been inspired by the 25th anniversary and have been working on an Emperor's Children army using some old minis I never got a round to painting. Some were still in the blisters.