Alien vs. Predator (plus the Colonial Marines)

This past Thursday I hosted another game set in the Alien vs. Predator universe, using the Warhammer 40K 5th ed. rules. Last time, the Colonial Marines were trying to save a Weyland-Yutani scientist. This time, the Marines were sent back in to take and hold the bio-tech that the squints left behind.

Scenario:
The Weyland-Yutani Corporation research facility lies in ruins seemingly destroyed and its secrets lost. However, its six hardened stasis silos still hold valuable "genetic research materials" which cannot be left to be recovered/rescued by the other side.

Setup:
The 27 Aliens were divided into 3 squads of 9 Aliens each. They could be deployed within 12" of the north table edge or may be held in Reserve, and could Outflank once available. The Colonial Marines forces consist of 3 squads of 4 Marines each, plus the Platoon Sergeant, riding in a pair of M577A3 APCs. They could set up or enter from the south table edge.

The six objectives were placed in the southwest table quarter, in the cantina (the yellow building to the west), behind the water treatment plant to the north, inside the garbage dump near the centre, north of the garbage dump, and lastly in the small forest to the northeast.

Colonial Marines:
A rifle squad consists of four Colonial Marines. Each squad may divide into two-man fire teams: the rifle team and gun team. The rifle team consists of a pair of riflemen, each equipped with an M41A Pulse Rifle or a M240 Flame Unit. The gun team is made up of a rifleman with an M41 Pulse Rifle and a machine gunner carrying the automatic M56 Smart Gun. The squad leader may also carry a shotgun. Two or three squads, led by a platoon sergeant (who may be armed with an M41A Pulse Rifle and/or a M240 Flame Unit) riding in a M577 armoured personnel carrier, make up a section. Two sections make up a platoon.

MikeF and Brian played the Colonial Marines, Frederick rolled with the Aliens. The Marines won the initial roll, so they forced the Aliens to set up first. Frederick adopted the null deployment ploy, outflanking with two of the three units of Xenomorphs. The Marines also declined to deploy, reserving both APCs with the Marines all embarked. The first turn passed with nothing happening.

Unbeknownst to the two sides, a third party (played by Kevin) showed up to spoil the party. All four Predators showed up at the top of the second turn, running towards four different Stasis Silos. The Predators are clear resin INAP Alien Hunters from Ainsty Castings.

Mission Special Rules:
The Predators had been watching the ongoing conflict on the planet with interest. Instead of nuking the site from orbit, Predators were dispatched to destroy these last specimens and purge any force which threatened their mission. The Predators started the game in Reserve.

Top of the second turn, starting from the centre of the table, a scatter die and 2D6 were rolled. On a HIT, the unit scattered the direction and distance on the dice. On an Arrow, the distance on the dice was doubled. On the turn they arrive, they would run toward the nearest intact Stasis Silo. Their mission priority was to destroy the silos, but they would fight any Aliens or Colonial Marines that lie between them and their target.

A Stasis Silo had an Armour Value of 14 and could only be destroyed by Predator models. Any glancing or penetrating hit would destroy the Stasis Silo and it could no longer be claimed by either the Aliens or the Colonial Marines. Once a Stasis Silo was destroyed the Predators would no longer consider it as a viable target.

Time for Reserves. Two units of Aliens came on from the northeast and west. Brian's single squad of Colonial Marines entered from the southeast in their APC.

Third turn, three of the Predators were able to move close enough to some Stasis Silos to charge them. Kevin rolled well, and all three Silos were destroyed, immediately halving the number of objectives on the table. 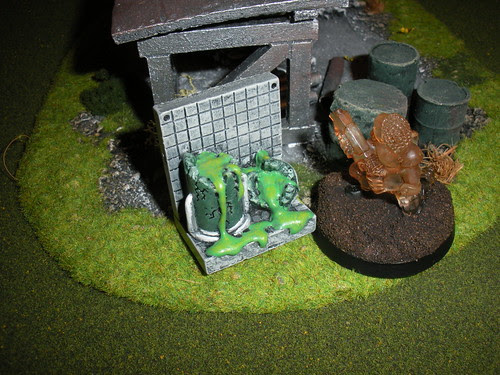 One Predator fired his weapon at Brian's APC, failing to penetrate the armour. 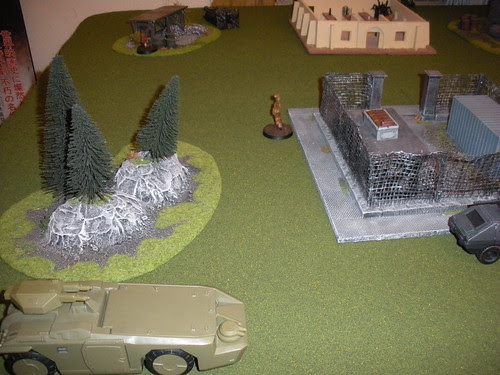 Below, the third squad of Aliens can be seen at the bottom of the photo, having just come from the east. Frederick is moving another unit of Aliens towards the Predator in the yellow building (who had just destroyed a Silo). 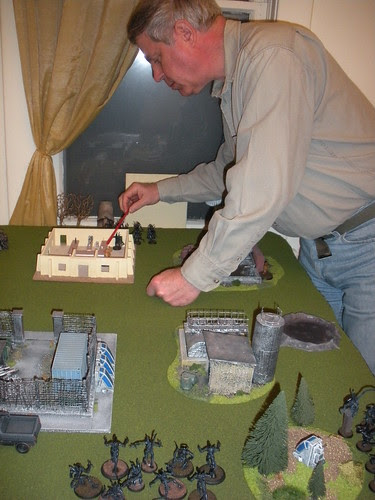 The Aliens swarmed through the bar toward the Predator. For his part, the Predator, armed with a power axe, nailed a couple of Aliens, but was then torn limb from limb. 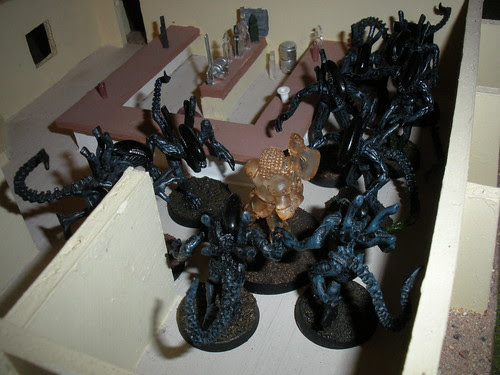 Below, Mike can be seen sitting near the second APC, which carried his two squads, plus the Platoon Sergeant; its turret swivelled toward the Predator in the far corner. Brian moved his APC toward the cannon-armed Predator, disembarking the squad. 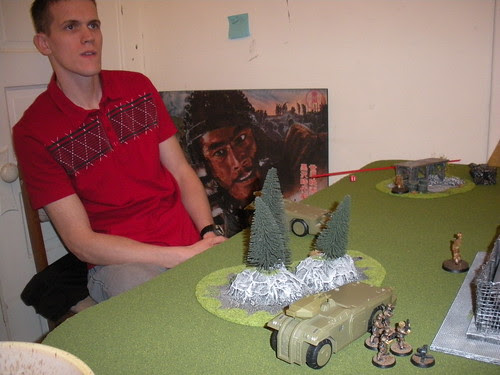 The two targeted Predators, too close for their stealth armour to protect them, fell to concentrated Marine firepower. 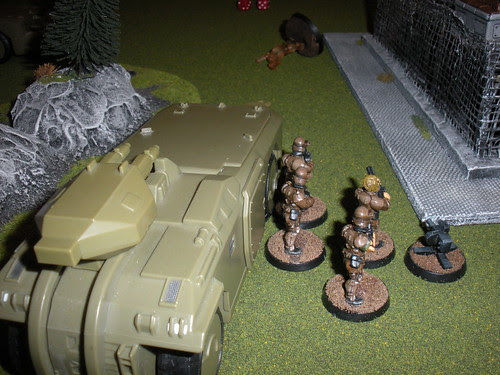 Next turn, the lone remaining Predator took cover in a crater near the north board edge, followed in the distance by the unit of Aliens from the cantina. 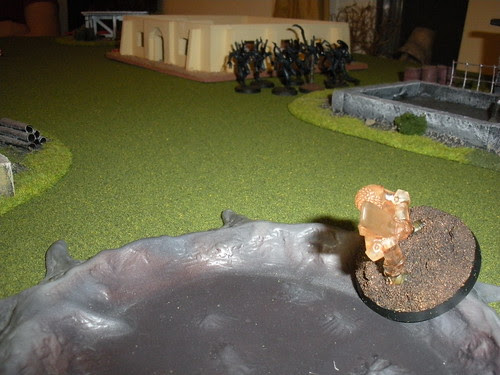 Mike's Marines disembarked. All the Marines advanced towards the north. The Alien unit near the Predator were reduced to only three members by long-range fire. 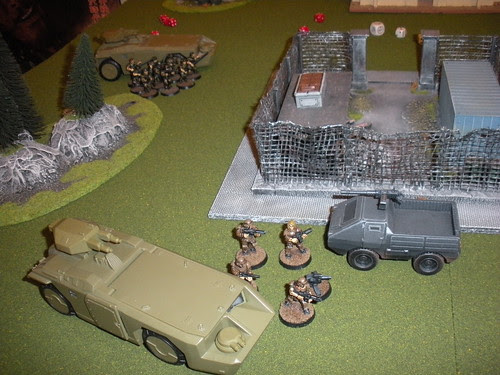 Kevin decided to charge the reduced Alien unit; he had a decent chance of wiping them out, and his stealth armour would shield him from long range Marine fire... 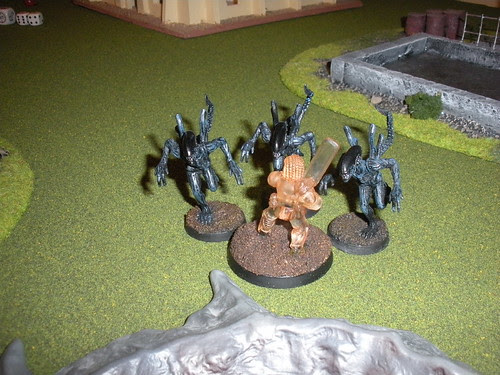 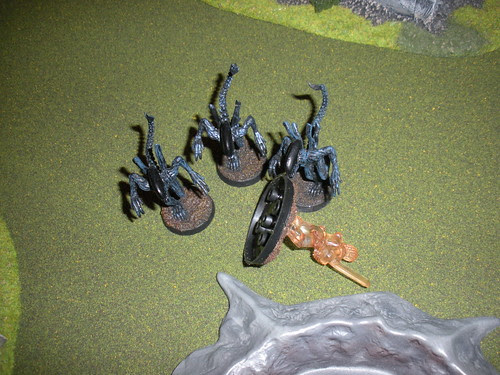 The Aliens to the east rolled over Brian's Marines, killing three. The remaining Marine's morale failed, and she broke for the south. 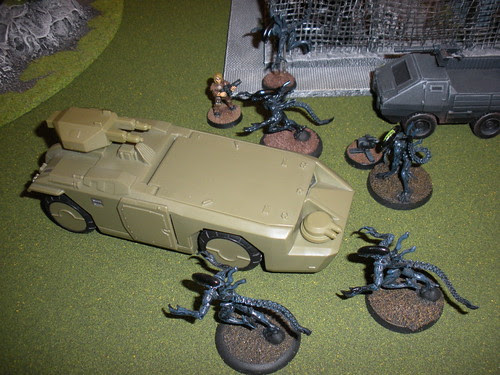 One squad and the Sergeant embarked in the other APC, while the remaining squad advanced on the ground towards the Stasis Silo in the dump. 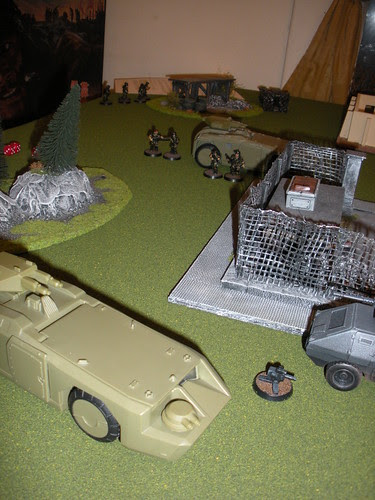 Overwhelming Marine firepower wiped out two units of Aliens. The three Aliens who had killed the Predator "swordsman" by this time had moved back to control the objective in the northeast. They went to ground, successfully weathering the gunfire directed at them.

At this point, at the bottom of the sixth turn, each side controlled one objective. Frederick hoped for the game to end, to gain a tie. However, under the random game length rules, a die was rolled (by Kevin, a now neutral party) and the game would continue for another turn. 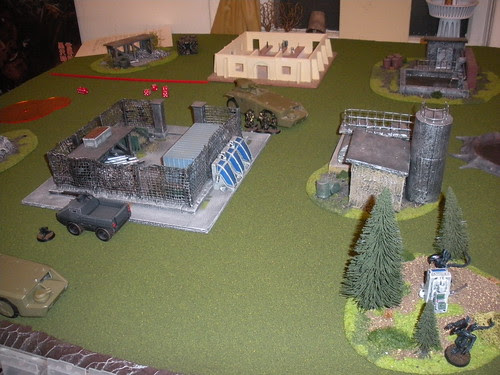 At this point, Frederick conceded. All the Marines had to do was move towards the second silo near the dump, and the remaining Aliens could not stop them.

It was a tense game, where fortunes kept shifting. Top of the third turn, the Predators looked like they might spoil things for everyone. Soon the Predators were all gone, and things were looking bad for the Marines, who had lost a squad and held no objectives. As Mike said, he thought the Marines would lose until things turned around for them in the fifth turn, when their firepower finally turned the tide. It was certainly a fun game to watch!

After the game we discussed how it ran. Some options to help further balance the various factions:

Next episode in this ongoing saga, the Colonial Marines will have to go underground to clear out secret Weyland-Yutani labs.
Posted by DaveV at 11:30 AM

great battlereport. Thoroughly enjoyed it. Thanks.

Very cool battle report, and a very inspiring game itself. Might have to attempt something like this as it looks like a complete blast to play!

Great scenario and nice looking game! Of course the entry of the Predators was all class - good twist.

I think another modification needed to balance the scenario further would be to cut back the Colonial Marines to a single APC. As you indicated in your report, the Aliens were cut to pieces by the "overwhelming firepower" of the Marines. The Aliens have only a melee combat capability, and have little chance to take out an APC, so all the Marines need to do is stay buttoned up until all the Aliens have been eliminated by shooting.

Curt, thanks! I think it would be cool to run just Aliens vs. Predators sometime.

Dusty, the Aliens have some capability against armour with their S4, plus their rending and outflanking abilities. That being said, the mobility and firepower of the 2nd APC is very (too?) powerful.

In-case you haven't seen them before http://www.predastore.ch/ very nice minis