After a flurry of posts on my 2nd Canadian Division in January and February, things got rather sparse in March. Painting slowed down a bit, but I got some additional figures completed: a 25 pounder howitzer with crew and limber, a 6 pounder anti-tank gun with crew and limber, two 3 inch mortars with crew and a group of eight Foundry French partisans. 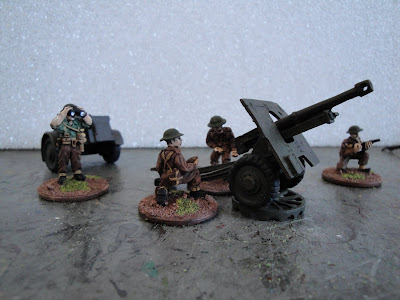 Battle Honors 25 Pounder with crew and limber. I have been looking for a vehicle to tow this but nobody seems to make a Quad Gun Tractor in any scales other than 1/72 or 1/35 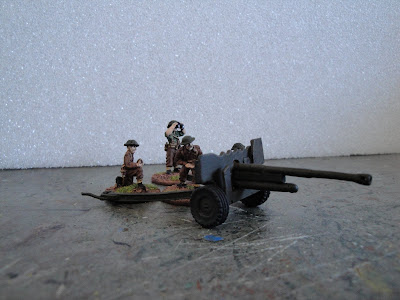 Battle Honors 6 pounder anti-tank gun and crew. It came with an ammunition limber but my research seems to indicate that these were not used. One of my Universal Carriers will be the vehicle used to haul this around the battlefield. 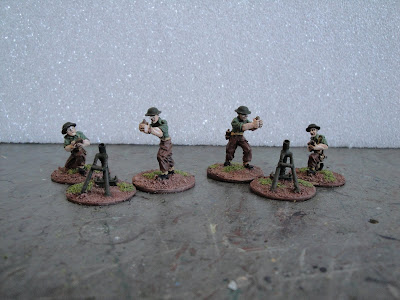 Battle Honors 3 inch mortars with crew. While I find that the sculpting of the Battle Honors range is not up to the same standard as the Bolt Action or Crusader range of miniatures, I like the fact that the crew are in shirt-sleeve order. Having fired an 81 mm mortar, I know that hauling that around and humping ammo can be sweaty work. 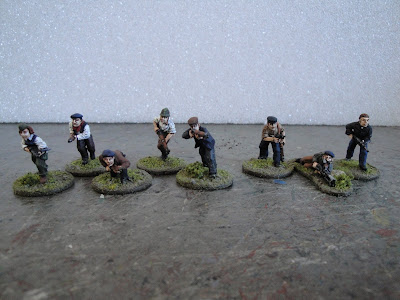 Foundry French maquis. I picked these up years ago just because I loved the sculpting on these figures. They are equipped with a mixture of British and captured German rifles, pistols and sub-machine guns. I always find painting motley attire more difficult that uniforms, often because I can't decide what colours would look right. I ended up with a range of blues, browns, grays and black that seemed appropriate for 1944 French civilians.
Posted by Dusty at 1:54 PM