It's about time I chipped in to the "Armies on Parade" effort here on the blog, and with Dallas providing some shots of his excellent Bundeswehr, I thought it would appropriate to start with their arch-enemies - the Soviet group known with affection as the "Chemical Commies". Workers of the world unite - and we're here to help... 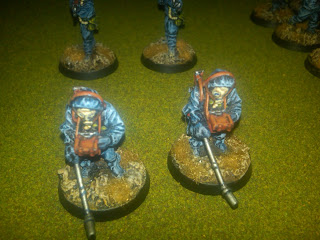 The infantry are from Eureka's beautiful "Soviets in NBC gear" range. I can no longer recall the exact progression of who provoked whom, but I recall Dallas flipping me the link when Eureka first unveiled these figures, and I was immediately snagged. NBC gear is one of the most sinister looks out there, and I found the Soviet ones particularly scary looking. 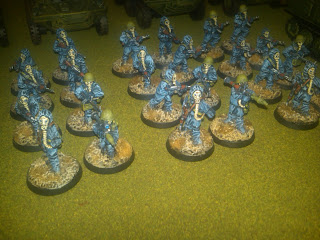 Little did we suspect (or maybe it's exactly what we expected, but anyway) how the purchase of some infantry would be the first step in one of the great arms-race spirals in our wargame group! Before long I was adding BTRs and tanks, and Dallas was responding with Marders and Leopards, and now we can fill big tables for WW3 smackdowns. 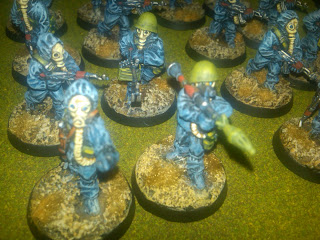 The vehicles are a bit of a rag-tag mix. The BTRs and the BRDM scout car are diecast toys from somwhere in Russian (I think) acquired on Ebay. The tanks - three T-72s, and three T-80s are Kitech kits acquired on the mega-cheap (thanks to E-bay's "North Korea Store"). The ZSU-23-4 is a custom resin job I acquired from some obscure website specialising in models of Russian vehicles. The scale of the vehicles is 1/43. Kitech, however, uses exactly the same chassis for every tank model. This makes the chassis of the Soviet tanks a bit large for that scale. But I still like the models - they are cheap, and they look like they are a proper size, as opposed to 1/56, which just looks horrible with 25/28mm. The Kitech kits are also the only model kits that I have ever assembled using a hammer... 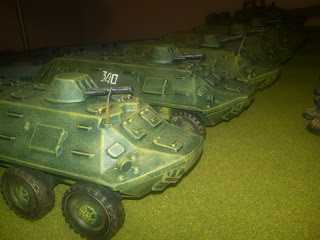 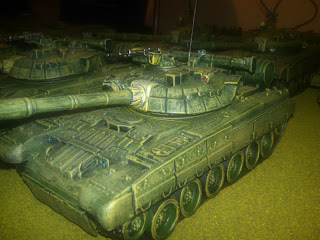 As Dallas noted, I have embraced the Soviet concepts relating to the quality of quantity when it comes to vehicles for the Soviets, and our WW3 games are packed with socialist armoured vehicles (many of which are on fire within the first turn, but anyway). The Chemical Commies are able to roll in motor rifle style, backed by tanks and covered with a helpful ZSU-23-4. 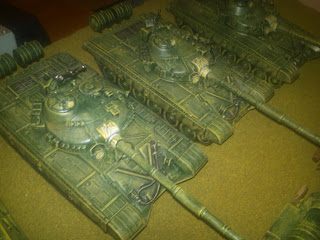 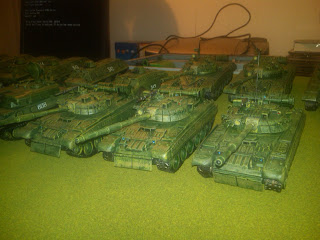 The Chemical Commies have battled the Bundeswehr on several occaisions, but have also enjoyed service against Zombies, and have acted as mercenaries on behalf of Big Pharma in many a World War Z encouter.

Maybe the only knock I would have on the Eureka NBC Soviets is the lack of more contemporary weapon systems compared to the Bundeswehr range. The Soviets have some great toys - RPGs, RPKs, sniper rifles, flamethrowers,Sagger missiles, and dudes with chemical/rad sensors. But the Bundeswehr stuff - particularly MILANS and the automatic grenade launchers, is right up to date. The Saggers are old school (1970s) and are no good against Leopard IIs. Hopefully Eureka manages to get some new stuff out there soon. 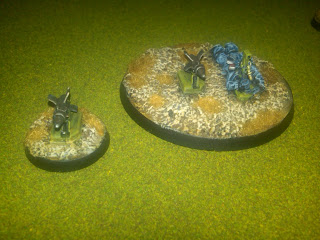 The crazy part of all of this is that this is not my whole modern russian collection - I will post some more pics with Part 2! Stay tuned (or keep watching/reading - I don't know what the right blogger term is...)
Posted by Greg B at 8:17 AM

sweet commies dewd!!! I just posted our batrep from two weeks ago...

WHERE did you get that ZSU-23-4... I've been looking for one in scale FOREVER!

@ Big Nick - Sadly I can no longer recall the exact website, but it was a website with a fellow specialising in resin and die cast Russian vehicles of 1/43 scale.

It was very expensive - even more than buying a GW kit. But getting the unique piece for the table was worth it.

I have heard Trumpeter has a 1/48 kit of the ZSU-23-4 available now - you could check with the excellent fellows at the Honourable Lead Boilersuit Company...