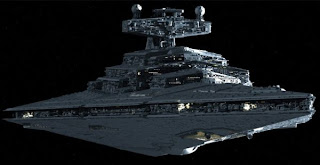 Last night Dallas ran a test game of his very cool Star Wars game featuring micro fighters and an Imperial Star Destroyer. Space battles for Star Wars are a lot of fun, but one of the challenges in gaming that aspect of the setting has always been coming up with something where the fighters are in some kind of relevant scale to the starships. The incredible size of many of the warships (which is very cool for the setting) certainly adds to the challenge. The half-assed attempt by the Star Wars Ship Battles game (in which the ships are in scale "with each class") is a sign that few entities are inclined to bother with addressing it.

Thankfully, Dallas has come up with something, using micro fighters and model of a Star Destroyer, that is both in scale, and thanks to a clever adaptation of the increasingly all-purpose Lord of the Rings rules from GW, very cool to play! 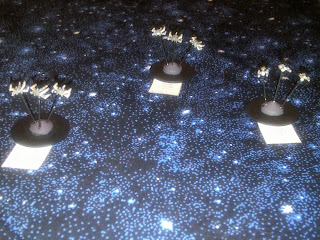 Some of the Rebel fighters from the game last night

The scenario involved a rebel fighter wing sent to halt a Star Destroyer before it did something negative to the Rebel Alliance i.e. sent a warning, attacked a base, jammed the free pay-per-view satellite etc. The details were not too important, as it was a test game. The Star Destroyer was able to defend itself with a formidable array of point defence lasers as well as a willing horde of TIE fighters. 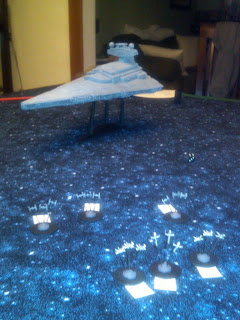 The rebel attack wing featued X-wings, A-wings, Y-wings and the adbsurd, just-about-anything-can-count-as-a-vessel-in-Star-Wars B-wings (side note - my ranting aside, I believe that in the genre, the B-wing is regarded as a formidable craft). There was some variability to the stats to reflect the strengths of the various craft. The rebels had to get past the TIE fighters and hammer away at the Star Destroyer, with the option of going for the shield generators in a hope to make the ship more vulnerable.

In the game last night, we lost a couple of flights of X-wings, but managed to knock out the shields and give a pretty good licking to the Star Destroyer. However, it was a test game, so not exactly victory-lap performance. But I can say with confidence that it is very damn cool, and in fact we are already bugging Dallas to find transports and other ships so different scenarios can be done!

Watch for this one at Prairiecon in two weeks! Next week we'll do a test run of the Robotech game, so hope to see you then.
Posted by Greg B at 8:22 AM

Good report, Greg! Thanks to you, Dave O., Brian and Mike for coming out and testing the game. I think I got some good feedback that will make the Pcon version even better.