I've just finished my last batch of British ships of the line for the battle of Trafalgar. Among them was the H.M.S. Victory and I thought it would be a a good opportunity to document how I built her. I used the following web sites for visual references:
- Wikipedia: H.M.S. Victory
- hms-victory.com 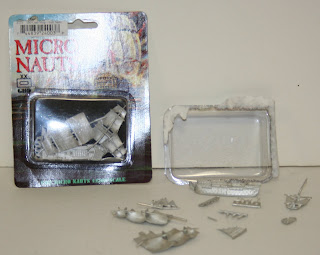 This is what you get when you open a GHQ blister. Note that there are anchors and boats, but I don't usually use them. I made an exception for the Victory, though. 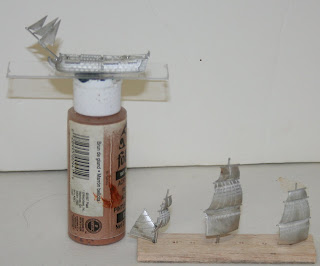 The parts are cleaned then the hull is assembled and glued on to a base. To fit the masts, holes have to be drilled in the deck. It's a little tricky for the Victory model because of the layout of the internal casting. All the other castings are easier to deal with. It's better to use a dremmel tool with a very small bit for this operation.

The hull is basecoated "Golden Yellow", then washed with "Flesh Wash". Because I don't like to use spray cans in winter time, the model was not primed. I know, it's wargaming heresy. After the wash is dry, the deck is painted "Kommando Khaki" and details added with "Scorched Brown" and "Bestial Brown". 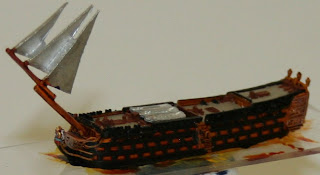 Then the black trimming is done. The checkered pattern really gives the hull it's British look. Only for the Victory, I've highlighted the details at the bow and stern, and painted the figurehead. I've also added boats, but only 3 out of the 5 she normally carries. I find that the trims and the gun ports are a little chubby compared to the real ship.

The masts have to be painted separately, otherwise it would be near impossible to paint the details on the deck. First, the bare metal sails (still no primer) was basecoated "Bleached Bone". Then I used "Sail Wash", which is simply "Flesh Wash" thinned down with water 1/3. To give volume to the sails, I've decided to add "faux shade". It may look silly on close-ups, but at a distance it looks nice. See the last picture of this entry to see the effect. The masts are painted yellow, the same way as the hull. Apparently, this was to help the crews distinguish friendly ships from enemy ones in close actions. Finally, black details are added. Sails take more time to paint than the hull and are a real test to one's patience. On the 60 ships I need for Trafalgar, there are 180 masts with 3 sails each...

Now it's rigging time! Here is a comparison between the "symbolic" rigging I've done to all my ships so far (in this case, a fellow 100 guns, the Britannia) and the extra rigging I've done for Victory. For the symbolic rigging, one single 30cm string is used and twisted to give this look. For the extra rigging on the Victory, I had to drill micro holes and use about 150cm of threads. String ends are secured with super glue. I've also added an extra sail on the bow mast and 4 anchors out of the 5 she normally carries. My initial plan was to do extra rigging on Victory, Bucentaure and Santissima Trinidad, but now I think I will be content with only one ship done this way.

The base is painted. First dark blue, then layers of paler colors are added. Here the Britannia sails in the direction opposite to the Victory to show what the trail looks like. 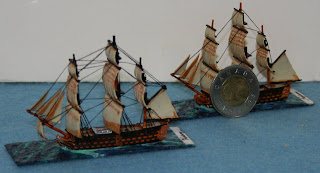 The final step is to add the name on the base and to cover the water surface with a coat of artist gel. It creates a nice contrast between the "dryness" of the hull and the "wetness" of the sea surface. To give an idea of the scale, I've put a tooney in front of the Britannia. 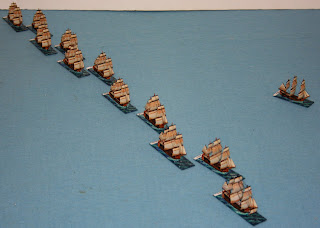 In this picture, the Victory leads the Weather Column at Trafalgar. The other column, the Lee Column, lead by Collingwood, when properly spaced, is about 4 feet long. Obviously, it will take a very large surface to recreate the battle. Trivia: What's the name of that lonely ship heading away from the column?

It this picture, the British meet the French section of the Allies at Trafalgar. The Spanish section is still in the shipyard. I just need to paint 14 more ships out of 60, plus a few frigates and odd ships, and project Trafalgar will be done. Since the sails are all the same colors and the hull are too small to be clearly distinguished, what really helps to identify friends from foes is the color of the name tags. I Spy game for kids: can you spot the Victory in the lot? Can you spot the only Spanish ship in the lot?
Posted by Sylvain at 9:11 AM

That is awesome! Even with the heresy of no primer...

The ship by itself is HMS Africa "under the command of Captain Henry Digby. Having been separated from the main British fleet before the battle, the Africa arrived from a different direction without knowing the battle plan that Horatio Nelson had devised. As the rest of the fleet engaged the combined Franco-Spanish fleet in a pell-mell battle, Digby sailed the Africa down the line of enemy ships in a parallel fashion, exchanging broadsides."