I am trying to move forward with my Elysian figures. They paint so fast that I blew through the first couple of packages of troops I had assembled. Then I wandered off to a couple of vehicle models that will be supporting them, and before I knew it, the momentum had stalled. I've never been good at focusing, but I do want to get these fellows ready, so for a start I thought I should build all of the remaining figures before firing up the painting assembly line once again. 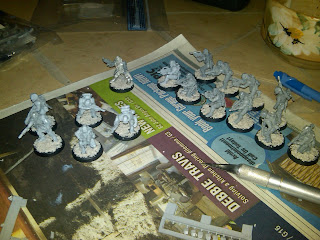 Mass production under way at the Greg B cave

I was also looking for an officer that would stand out a bit, so I thought I would try this old-school Rogue-Trader era Imperial Guard captain. I love the Rogue Trader Imperial Guard figures, and a recent Rogue Trader game at Dallas' place (hey Dallas - post the pictures!) made me think that trying to include an RT model of some kind in this force would be a good piece of nostalgia/homage.

The officer's cap on this model has a pair of crossed sabres, which I think fits the Elysian look. The arms are not a great mix - leaner-looking than the chubbier Captain, but hopefully it will fit well when painted. Mike F had suggested a yellow scarf to emulate Duval's character in the film "Apocalypse Now", but I think I'll stop here for now. 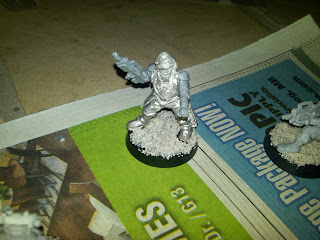 Hmmm....I hope the arms fit a little better once this model is painted

I also have a squad of Elysian veterans. They have shotguns (which look really cool), but unfortunately these packs featured a lot the Forgeworld downsides, including tons of flash and bent gun barrels. Hot water helped save most of the gun barrels, but the flash was frigging annoying.... 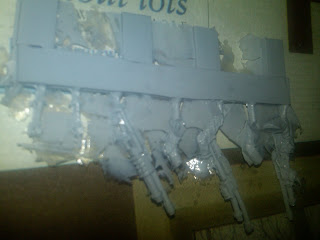 At ForgeWorld, quality is Job #7

The real hilarity comes when you read on the package about how the models are produced using the best techniques....right - it's all the resin's fault....

Once I have all these guys painted, the infantry component of my starter force will be mostly complete - a command group, three squads of regulars, a squad of veterans, and a special weapon squad with melta guns. I would still need a platoon command group, but with the Guard army list, you can take veterans as a troop choice, so I may try to run it initially as an all-veteran force.

I may add some other odds and ends, like heavy bolter or missile launcher teams for the squads, and things like a Commissar and the advisors. But the bulk of the grunts should be in place.

Of course, the harder part will be finishing the air component. This bunch will need five Valkyries to ride around in, and I've only finished one! One problem at a time....
Posted by Greg B at 9:22 AM

Wow, that's a lot of flash!

it's inspiring to read through you block. so thanks^^ well if the arm does not fit (i referr to the commander) some green stuff could surely help^^