Back to some painting again, with the excellent NHL playoffs kindly offering up several seven-game marathon playoff series which provide the perfect backdrop for progress. I'm continuing to work on the Elysian force, determined to get these chaps ready for a 1500 point game before August.

Up first is the new Captain and a couple of new recruits. The Elysians do have a lineup of officer models (including a chap with a power fist) but I wanted a model that would really stand out as the senior officer in charge of all this cool, flying kit. Although the "Commander" was my favourite officer of the Rogue Trader collection, what I liked about the Captain is the crossed sabres on the cap. I thought it mixed well with the theme. 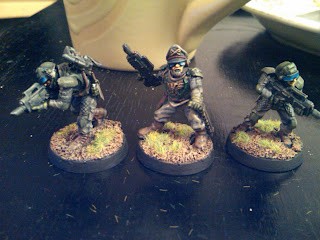 Someone show me where the Valkyries are!

I was really pleased with how this retro Rogue Trader-era chap turned out. Definitely stands out from the other Elysian troops, but still fits in closely thanks to the spare arms. I figure that will be OK for a senior officer. I have some other spare "command section" guys from the Rogue Trader lineup, and I am toying with trying to covert them too, but I might just leave well-enough alone. I'm not sure the whacky helmet of the old standard bearer would look that good in the army.

I also went back to some previously completed Elysian models for a re-basing project. Readers may recall my whingeing about how the Elysian figure line involved several two-man team variants for the special weapons like melta guns . This was annoying because it did not fit well into the 40k rules, plus was it was totally annoying on a subjective basis. And hey, it's all about me....

Well, in Regina I noticed an Ork player had some of their adbsurd oversize bikes mounted on non-square, rounded-edge cavalry bases. I asked where he obtained them, and was surprised to learn they came with the figures, meaning that GW had created a new base! I picked up a few, popped out my melta-gunners from their two-man bases and tried out the new bike bases. The results of the experiment are below. Melta-gunners - just wanted to be able to see other people...

I'm glad to have the melta guns as singles, although the one guy with no melta-gun looks a bit disconnected from anything relevant (now that I think about it, I should have piled through the bits box and put a plasma gun on the base or something). Overall the fit is not too bad with the other regular troops. The rounded edges make a big difference in helping the models "fit in".

I have approximately 30 infantry models left to go....hopefully I can make a big dent in that pile this weekend.
Posted by Greg B at 8:52 AM

That officer looks pretty good. A yellow scarf may make him look like a bit of a 'tard.