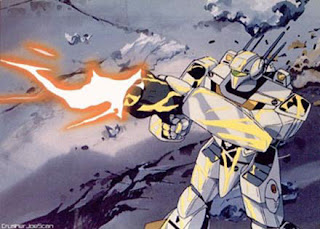 This week we will playing Robotech. The game will be a trial-run for the scenario we are hosting at Prairiecon in Brandon this Saturday. And at the risk of making Brian H's head explode, I'll be adapting the Lord of the Rings rules engine for the game!

We often joke about how we use Lord of the Rings to play everything. And I don't even know if we're kidding that much when we say that - we use it for Zombies, Sudan, Star Wars space combat, as well as actual Lord of the Rings games. It's a very, very versatile and simple rules set, an example of how GW rules that are not 40k are actually very good.

In the past we have played Robotech using an adaptation of "Mobile Soldier in Action", a set of free rules on the web intended for battles set in "Mobile Suit Gundam".

I like the MSIA rules a lot, but they get a bit slow with more than a few models per side. One dynamic of any Robotech/Macross encounter is that the aliens are sure to outnumber the human side - by a lot! MSIA struggles to flow in that kind of set up. Another key dynamic of Robotech/Macross is that the alien mecha, while really big and scary-looking, is actually made by some universal-lowest-price-reduced-quality-contractor, meaning they bring a quality-of-quantity type approach to a battle, and individual battle pods get mowed down like chaff by the heroes. Looks great on screen, but using the MSIA approach of worrying about whether some expendable battle pod has lost a leg or has damaged sensors etc. is not useful. The UN Spacy guys should be able to gun em' down, or hose them off with missiles, while the aliens rely on inexhaustible numbers and a few characters to try and carry the day.

I am hoping that LOTR engine can handle this a little better. There will be challenges for sure - LOTR is great for settings where close assault/hand-to-hand combat occurs. Can't say that is a regular feature of Macross, unless you count Roy Fokker's battloid putting its gun right against the sensor of a battle pod before emptying the clip as a "close assault". What kind of close attack is a giant, ostrich-legged pod going to make anyway, other than to stomp on civilians? The SDF-1 does "punch" the odd alien ship, but that is still a shooting attack of sorts too. Macross is just not a hand-to-hand combat genre.

If you are interested in scenario details, here is the blurb from Prairiecon:

The SDF-1 has landed at an abandoned research base on Mars to recover supplies, only to be ambushed by Zentreadi battle pods. Can the RDF defenders hold the line while the SDF-1 prepares to escape, or will the Zentreadi overrun the thin line of Destroids and Veritechs to capture the SDF-1 while it is trapped on the surface?

Email ThisBlogThis!Share to TwitterShare to FacebookShare to Pinterest
Labels: game, LOTR 4 everything