As covered previously in the blog, my 15mm Austrian Napoleonic collection has been short of reinforcements for quite some time. I tidied up a few loose ends over the weekend and last night during Monday night football to try and give them SOME new blood. 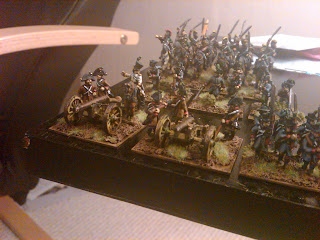 In addition to the Landwher from last week, I finished off a unit of skirmishers, for starters, so at least one Austrian brigade can get a skirmish screen. I also added some artillery pieces, including one base that can stand in as horse battery. 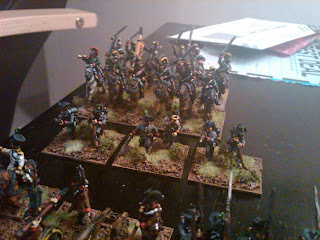 The other unit I finished was a unit of Cheveauxlegers - Austrian light cavalry. Oddly, I had started the unit 8 years ago, but not finished it. So I added the command base, and one more base, to round out the unit.

Hopefully they'll see some action this week!
Posted by Greg B at 5:15 PM