I had to head out to Toronto last week for work. I figured that since I was going to be away for a chunk of time, I might as well bring some "homework" with me - a bunch of Napoleonic French 25/28mm plastics from the Perry range as I gradually expand my army....the plan nearly backfired, as the exquisitely incompentent buffoons at Air Canada decided that my luggage and I had no need to be on the same plane, but I managed to get 11 guys done last week! Being away from home sucks, but at least you get work done. 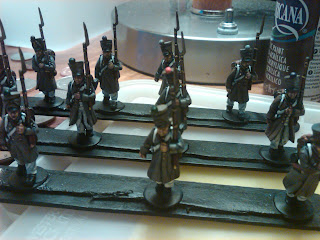 Of course, this is an "all-trenchcoat" unit, so it is kind of like cheating, as the coats paint up pretty fast compared to the uniforms. I finished the command group for these guys on the weekend (unfortunately the command is not in great coats...oddly, that is the one oversight of the Perry collection, if you can call it an "oversight" - it is a pretty magnificent line-up and I'm not about to complain). That unit is "baking in the goop" waiting for final basing.

Switching gears, some of you may dimly remember some smack-talk (by me) of painting up a "Leuthen Battlepac" of 6mm Austrians from the Seven Years War that I had inexplicably obtained about three years ago (I believe a distributor sent it to me as a 'makeup' for an incredibly late shipment of 6mm Napoleonics - I never did get an explanation as to how SYW stuff would make up for Napoleonic stuff, but free is free). The bag was Austrian SYW stuff by Adler miniatures (outstanding 6mm figs) - about 180 musketeers, 24 grenadiers, 3 sets of command, some hussars, some cuirassiers, some artillery batteries and mounted officers - a nice set of stuff.

I don't know much about the SYW, but it is a period that has interested me because the uniforms are really, really neat - with the huge coats, cuffs, collars and tricorne hats! But I never got into it, given that I had enough other stuff on the go, and besides, once you have seen Brian H's 15mm collection of SYW stuff, well, really - what can you hope to add to that??? Also, any encounter with a Prussian Army of Frederick the Great's time tends to feel like you are playing against the Eldar in 40k.

On the other hand, 6mm - well, it has a different look, feel, and will be more forgiving (I hope) of the fact that I don't know a whole lot about the different units' facing colours etc. I started off painting a few "test" figs last night. These are Austrians in the "advancing" pose (I prefer the marching pose, but you go with what you have - like I said, it was free stuff). 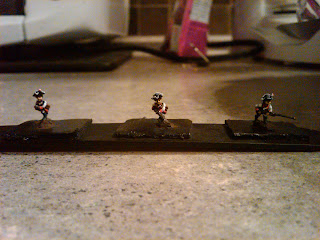 I will base them to go with the "Might & Reason" rules by Sam Mustafa. With the test figures out of the way, I can get to a more "industrial" approach. 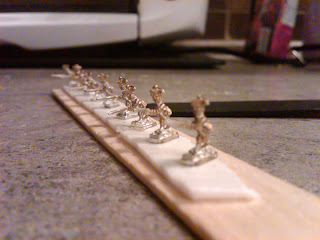 I have ordered some books for the armies of the period, so I can hopefully figure out other facing colours etc. and of course I'm hoping to get some flags from Brian too. If I actually get a Christmas holiday, look for a SYW war force in 6mm appearning in a Fawcett game soon.
Posted by Greg B at 11:56 AM