Some pics of recent progress from the painting table. Up first, a completed unit of Austrian 15mm regulars. These were completed in the midst of a recent mad run on some long overdue 15mm Napoleonic projects, which itself was inspired by a recent game. 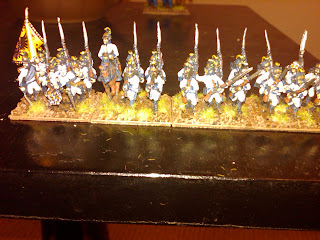 This unit has only one flag (all of the other ones have two, but I'm running short of standard bearer models, and I have not noticed the extra flags helping the Austrians fight any harder!). This brings the total number of regular infantry units for the Austrians to 16 - still four short of my goal of 20, but one thing at a time.

Much MORE exciting is the completion of my very first unit of 25mm scale Austrians! Well, technically they are Hungarian, but you get the point. It only took me THREE YEARS to finish this group of 22 infantry and one mounted figure. I did the first 6 infantry three years ago, then 8 more, including the officers last year, and then finished the balance this week, including the excellent painting nite Dallas hosted. The figures are all from Foundry, and the bases provide a very satifying heft! Excellent banners (in this unit and the 15mm one) courtesy of Brian. 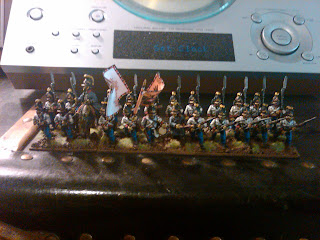 Hopefully this bunch will inspire me to proceed a little more quickly on reinforcements, but generally I am trying to get a critical mass of French done first in 25mm. Here is a (admittedly poor) photo of some French Voltigeurs I finished last week, based as skirmishers for Shako. The figures are Perry, from their plastic French infantry box set. 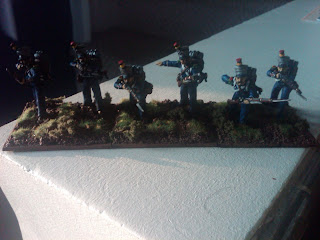 As you can tell from my insane scatter of different projects and periods, focus is not one of my strong suits! I have some other horse-and-musket nuttiness to go in my system (read - Leuthen Battepack) before I get back to preparations for the final showdown on Toxo IV...but I still harbour ambitions of a 25mm Napoleonic game sometime next year.
Posted by Greg B at 5:44 PM