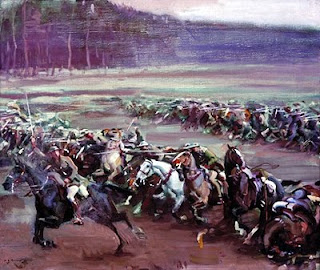 "It's a charge, boys!"
Yesterday, after attending our usual ceremony at the local cenotaph, I finished painting my Great War Canadian cavalry (fittingly, as it was Remembrance Day) and we set up a wargame for the evening. As I'd written beforehttp://wpggamegeeks.blogspot.com/2009/01/28mm-great-war-cavalry-from-blaze-away.html, I've wanted to game the Battle of Moreuil Wood, one of the last great cavalry charges in history. In that action, Lt. Gordon Muriel (!) Flowerdew (!!) won a posthumous VC leading the charge of Lord Strathcona's Horse against German infantry and machineguns outside Moreuil Wood. 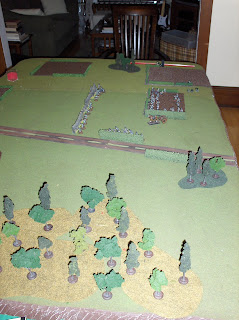 The terrain set up above represents the eastern edge of the Wood (bottom) and the German positions (centre). Canadian dismounted cavalry troops are pushing through the Wood, while Flowerdew and the bulk of "C" Squadron of the LSH ride to cut off the German retreat. We used the new "Great War" ruleset from Warhammer Historical Games and played "The Pocket" scenario which seemed to fit the historical situation reasonably well. The game lasts six turns, and the victory condition for the attacker (Canadians) is to eliminate every scoring unit in the German deployment zone. Any result other than this is a German victory. 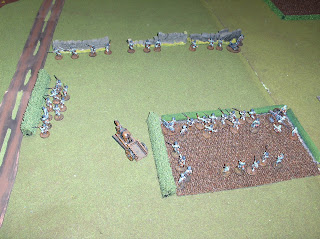 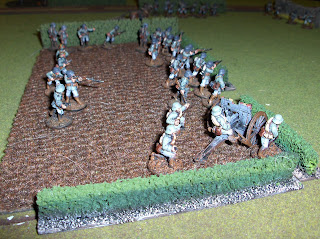 Mike F. commanded the Canadians and used the scenario "reserve" rule to keep two cavalry troops and the Squadron HQ in reserve, while deploying the other two dismounted troops in the Wood, and his two HMG sections to the north. 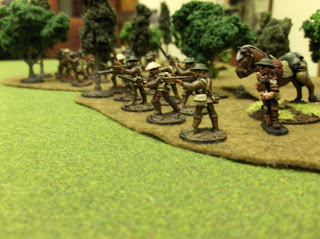 The Germans and Canadians exchanged fire, with Cam seriously depleting one of the dismounted cavalry troops while Mike destroyed Cam's assault platoon with concentrated rifle fire. Cam's troops on the northern edge of his deployment zone, behind the wall, shot up one of Mike's HMG's but the other wreaked vengeance, killing half of Cam's platoon.

Then in turn two, Mike rolled for his reserves... 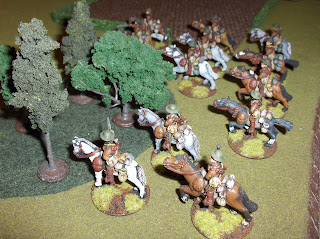 ...and on they came! Mike deployed his cavalry on the far short table edge, opposite the Wood. Flowerdew had clearly taken the extra time to maneuver around to the flank of his enemy, and his cavalry worked into position for the charge. 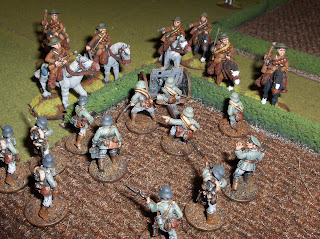 1st Troop struck hard, killing the crew of the 77mm gun before it could fire a shot! Meanwhile, to the north, 2nd Troop charged home against the Germans defending the stone wall. 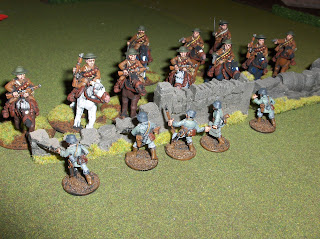 Unfortunately Flowerdew and his command section were caught in between in open ground and subsequently slaughtered by Cam's machinegun... making the posthumous VC possible after all. This was the end of turn three and things were not looking so good for the Germans. Shortly thereafter, Cam bid "auf Wiedersehen" and I took over the German command.
Sadly for Mike I brought a hot hand to the die rolling and the Germans started to come back, big style. The key for the Canuck cavalry was to hit hard and wipe out an enemy unit each turn. Even starting at a strength of ten models, they don't have the staying power to keep in close combat turn after turn with large enemy units. However this is just what happened. The Germans on the stone wall lasted two turns longer than expected and whittled the cavalry down. The German battalion commander, Major Haase, turned out to have a real taste for mixing it up hand-to-hand and ended up the sole survivor of his HQ group. Luckily the Assault Company command section was able to charge in and help him out, ending the Canadian threat for good.
At the end of turn six the Germans still controlled their zone, but just barely. Of the troops that began the game, there remained one assault platoon a bit reduced, a machinegun section, the Assault Company HQ, and Major Haase. The assault platoon is a scoring unit so that was enough for a German win. A very fun and good-looking game! 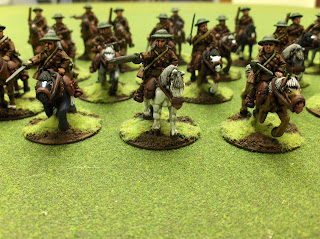 I also have to give a shout out to Jon at Blaze Away Miniatures for supplying the cavalry models. They are just super-nice, easy to paint and characterful. Rich at Dayton Painting Consortium generously supplied the sabres I used to convert several of the models, so thanks very much to him as well.

It may have been worth it for the cavalry to fire their pistols a few times. There were at least two opportunities to do so (once on the HQ and another on the squad on the stone wall) where I decided to take the extra D6 movement. One of those was totally unnecessary as I started my turn only an inch away! Oh well, it was a charge... apparently. The game itself looked great and Dallas did an awesome job on the cavalry. I also enjoyed the open warfare scenario seldom seen in a western front WWI game.