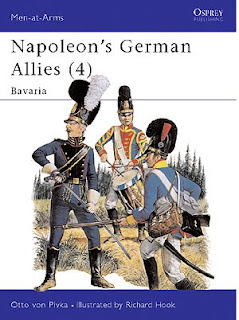 Well, the latest poll has concluded, and it looks like 15mm Bavarians are the winner.

Regular readers of this blog will recall that we typically pressure/abuse fellow conscript Cam into painting something - indeed, anything. Cam, while we're on that topic, I understand the modern Chinese have arrived. I look forward to photos, uploaded via Iphone!

But for fun, it was time to pressure Mike F a little bit too. Thanks to our abuse of Mike F, he now collects British troops for, what is it, five different periods? And he's been great about it. His modern 25mm brits are awesome, as are the WW2 ones, and his 6mm modern brits have dished out (and received) quite a bit of abuse to my Warsaw Pact chaps. And who can forget Future Gordon Brown?

Seeing Mike F's strong progress along the path to the dark side, it's time for him to take the ultimate plunge. Come on Mike....I need to order some 15mm Austrian stuff anyways, so let's get some 15mm Bavarians from AB miniatures via Eureka, track down an Osprey book for painting reference (pictured above for convenience), and your journey to the dark side will be complete!

Let me just take a hammer to my Xbox and then we can talk.

Let's not be crazy now - there is no reason to harm an Xbox (unless you get the Red Ring of Death...)

I see another Left for Dead title is coming soon too...