The Battle for Armageddon 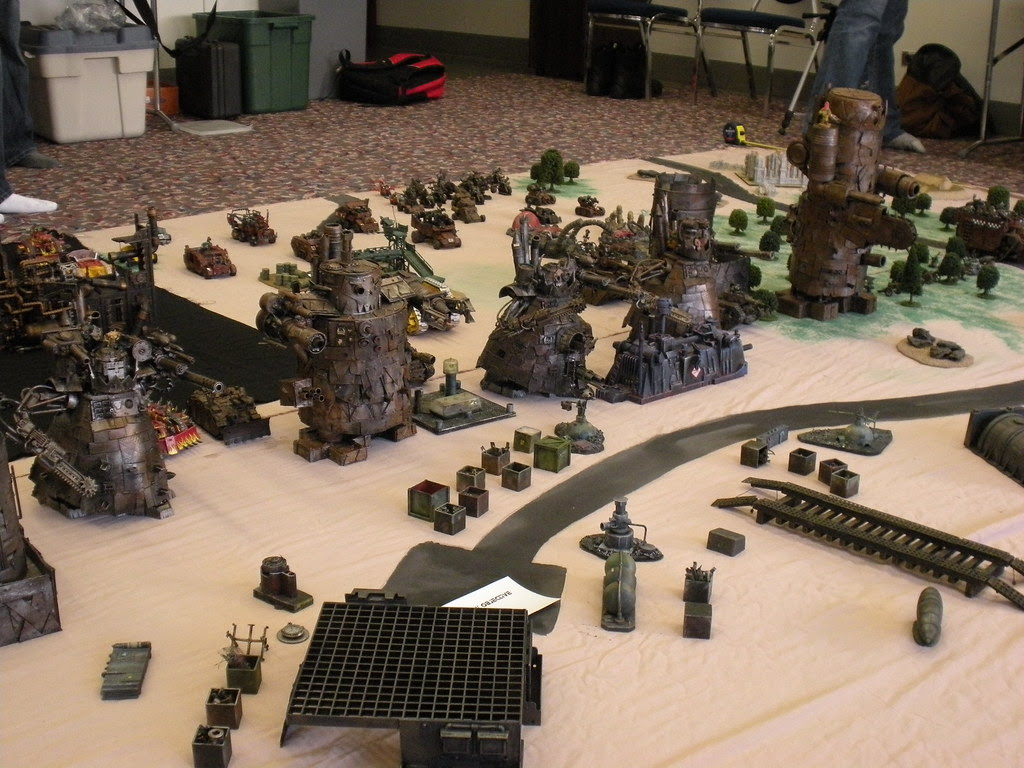 (click on the photos for larger images)
On Saturday, Nov. 7, the Astronomi-con boys (Christian, MikeM and Keith) organized a grand battle, involving a themed game between Orks and Imperials on the planet Armageddon. The Eldar played a third side, who had their own mysterious objectives.

As the morning dawned, the players gathered at the University of Manitoba for the game. As it turned out, 15 players showed up, with approximately 60,000 points worth of painted models, to battle it out.

The photo above gives an indication of the scope of the affair. The 5 large Ork war machines in the photo are 4 Stompas and a scratch-built Gargant. That's a lot of dakka...

As stated above, the game was basically Orks vs. Imperials (11 players total) with 4 additional Eldar players, including myself. There would be three factions' turns during the course of each game turn: Ork, Imperial, then Eldar.

Factions received victory tokens each turn for possession of various strategic locations on the board, for killing named characters, and for inflicting structure point damage against super-heavy vehicles. The margin of tokens at the end of the game would decide victory, but you could try to trade tokens between factions (for example, in exchange for a one-turn truce) and a faction could "cash in" tokens to purchase various in-game assets like orbital strikes, during the course of the game.

The complete rules of the grand battle can be found online here.

The Eldar could score tokens, usable to trade or buy assets, but for no other purpose. At the start of the game, we drew randomly from a set of scenario cards. On the card we drew, we were presented with a points spread between the Imperial and Ork forces - if the Imperials won by between 6-15 battle tokens, their victory would be downgraded and the Eldar would win a major victory. Other specified spreads on the card would result in Eldar minor victories or a loss.

So, the Eldar would have to try and manipulate the battle and manage its received victory tokens, to manufacture an Imperial win of the required spread. Very atmospheric.

As usual, I fielded my Swordwind army. This time, I brought around 4,000 points of models. All the Aspect temples were represented, plus various psykers, other supporting troops, wraith constructs, a Nightwing aerospace interceptor, and a Scorpion superheavy grav tank (represented by the old Tempest superheavy from Armorcast): 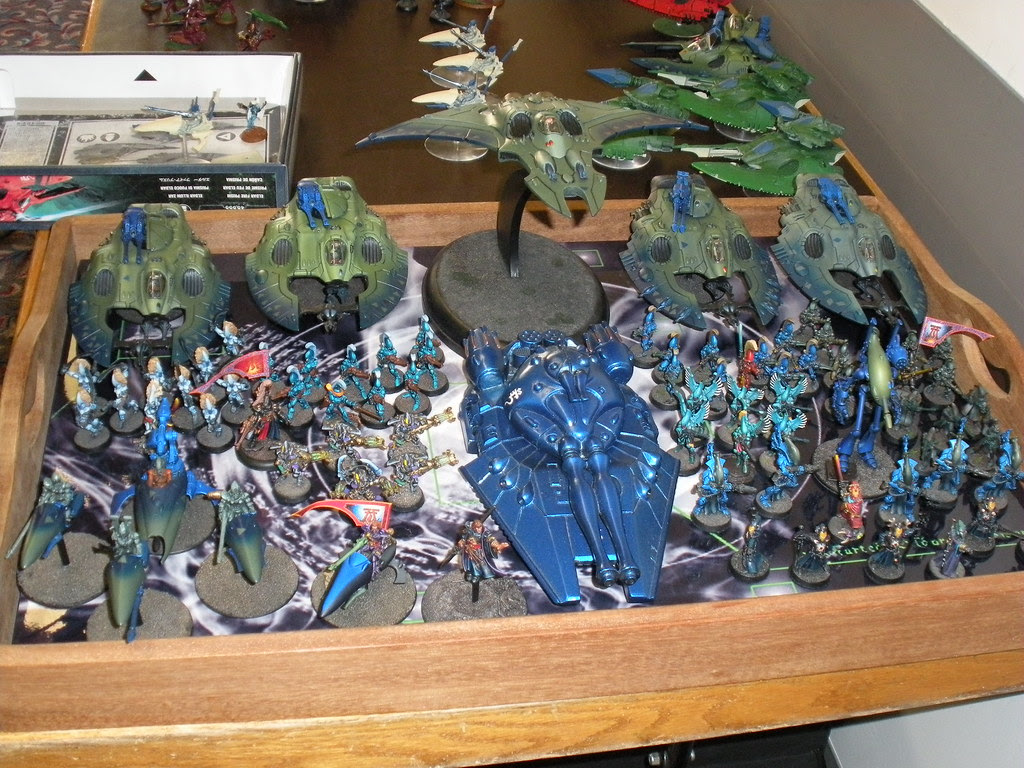 Noah and Mike, two of the other Eldar players, also fielded Swordwind themed forces. The fourth player, Derek, had a mixed force of Guardians and Aspects. Between the four of us, we were able to field a 5-tank Fire Prism formation (controlled by Noah), a 5-tank Aspect Assault Wave (controlled by myself), and an ersatz air squadron of 3 Nightwing interceptors and a Phoenix fighter-bomber. The Eldar had the only aircraft on the board, so we had air superiority - but could those planes make any dent in the walls of steel we faced?

Below is a picture of Christian, who fielded all the Imperial Guard forces on the table immediately behind him. I think he likes tanks. 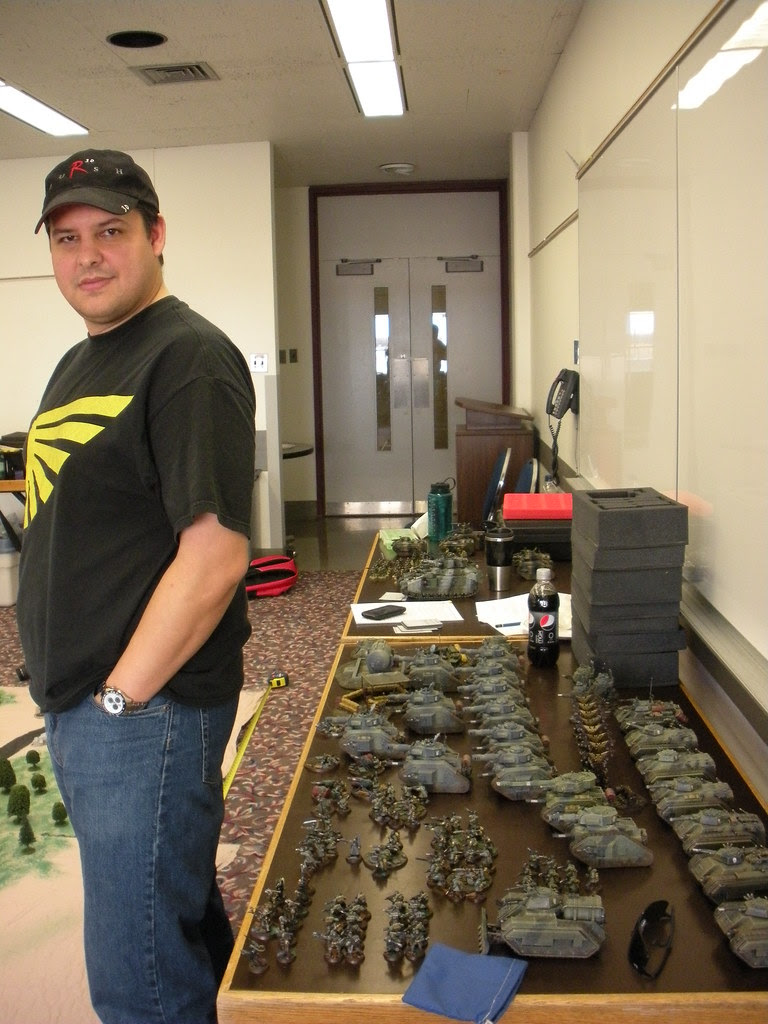 Below is a picture of MikeM, taken during the Imperial setup. Note the Warhound Titan to his right - a treasured relic from the mid 1990's. 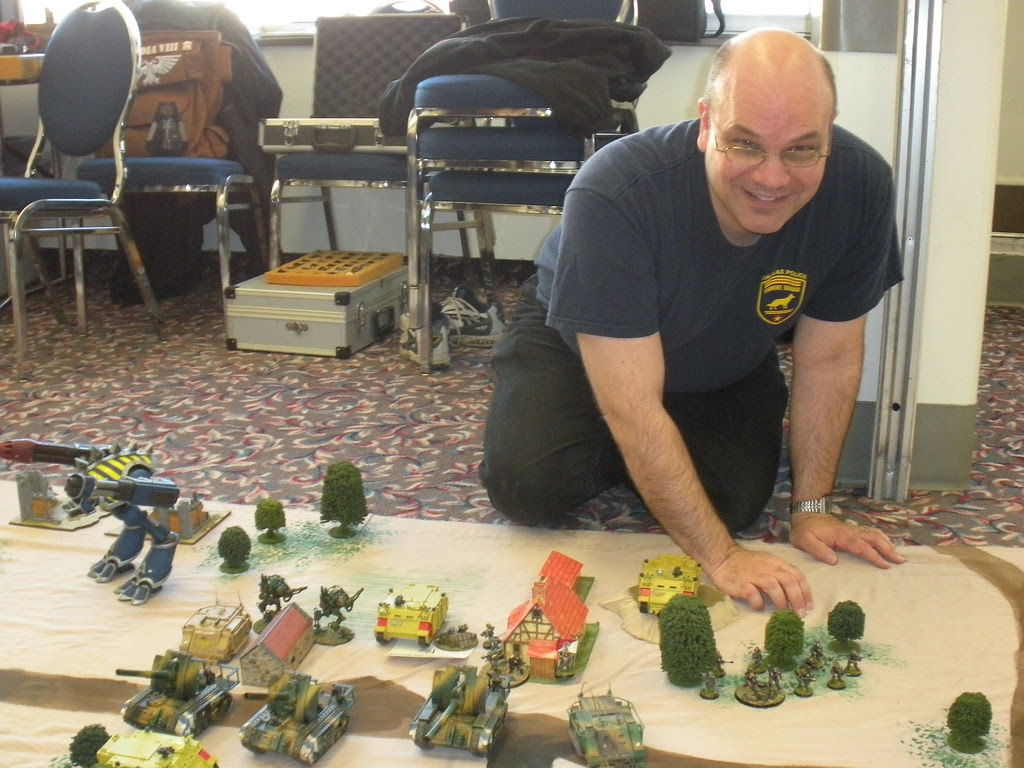 The Orks set up on a broad front, sending a "Green Tide" of Boyz towards the spaceport tower in the centre. They set up more Boyz to hold the city within the middle of their (South) board edge deployment zone. On their left flank they set up the heavy iron, multiple superheavies leading many, many more boyz on the ground.

Later on in the game, they ended up strategically deploying a multiple-Trukk Cult of Speed near a river crossing to the northeast, and a wing of jetbikes just north of the Warhound Titan.

The couple of hundred or so Boyz in the Green Tide by the spaceport looked awesome. 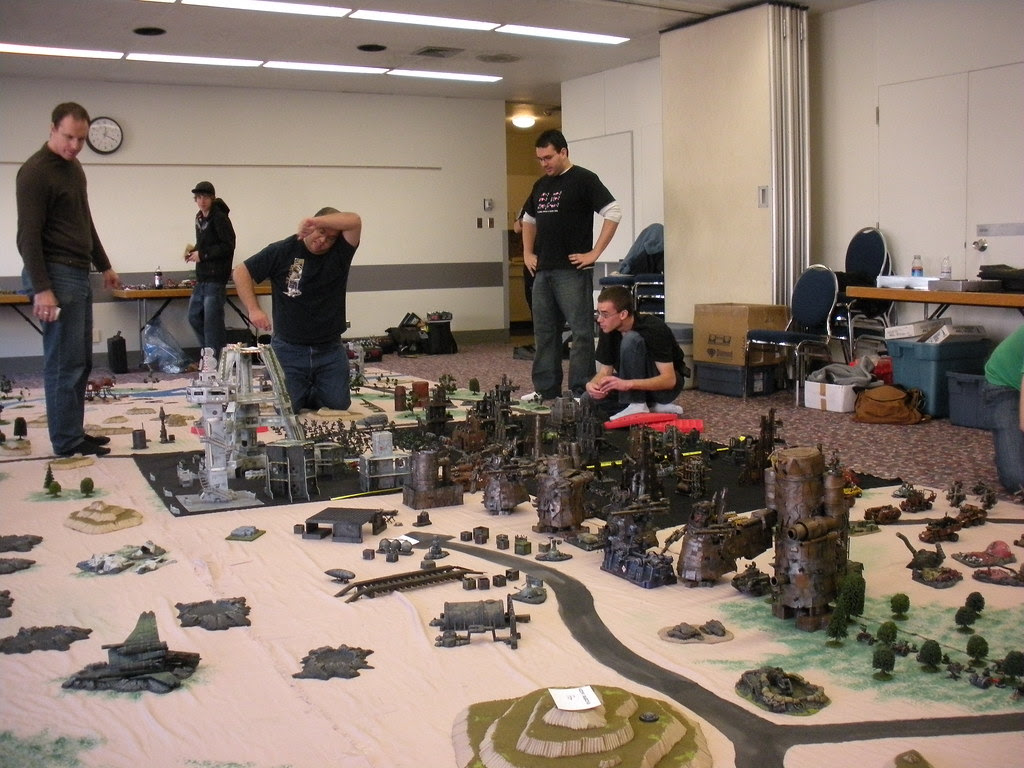 The Imperials set up mostly to the north and northwest. A couple of dozen Leman Russ tanks and Chimera APCs, backed up by some Baneblade and Shadowsword superheavies, would make their way towards a strategic hill in the west.

The Space Marines, including two(!) Vindicator Linebreaker squadrons, would make for the spaceport, supported by Imperial Guard and Grey Knights, and one each of Malchador and Baneblade superheavy tanks. Deep in the Imperial deployment zone, near the north board edge, Guardsmen occupied on or near a strategically located village with various supporting elements, including the Warhound Titan, some more Shadowswords, and a Basilisk artillery squadron. 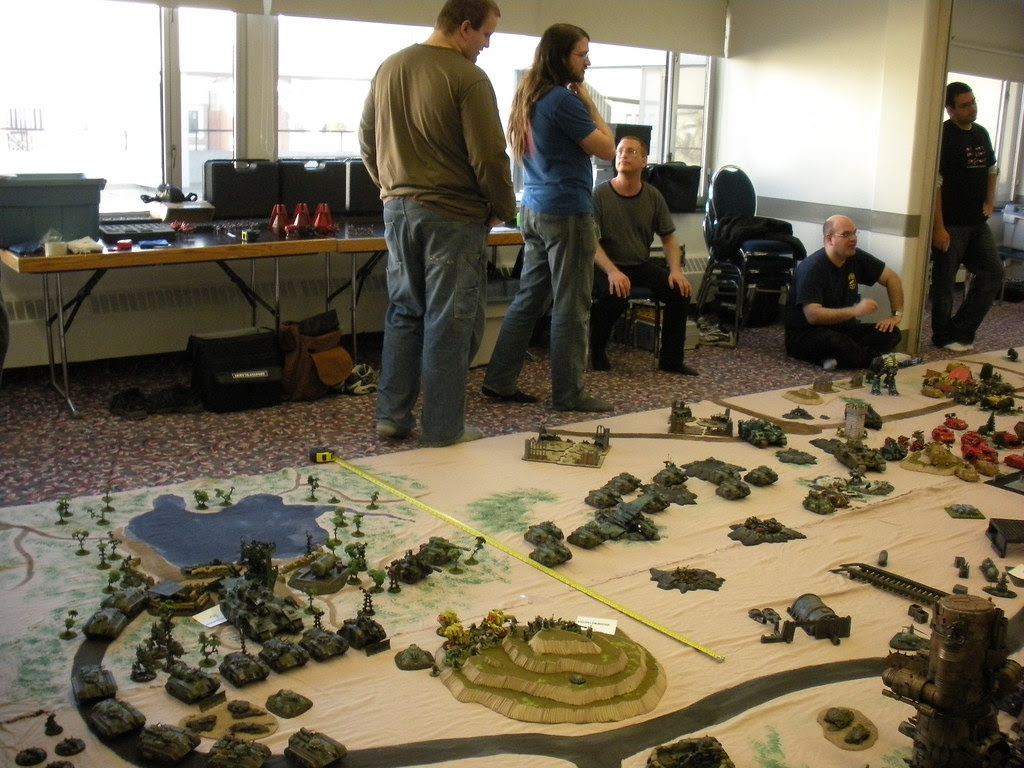 The fighting started right away, with the Orks advancing towards the spaceport and the hill. Off board artillery was dropped on the close-packed Imperial forces, killing 2 of 3 Basilisks. Further fire from the guns of the Stompas and Gargant cut a swath through several tanks.

In return, the Imperials lobbed several extremely large blast markers at the Orks, inflicting several casualties that somehow didn't seem to make a dent in the greenskins' numbers. 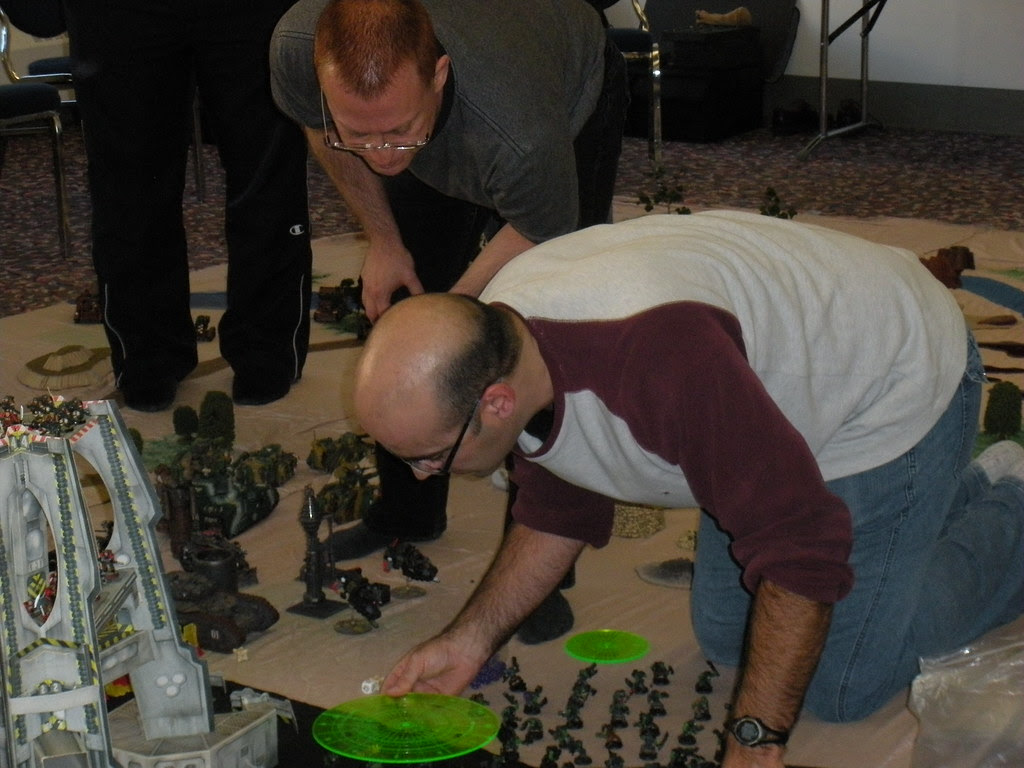 Pre-game, the Eldar marked on maps where they would appear on the table, including Waygates (out of which any ground forces would move) that were deployed only at the start of the Eldar players' turn. Surprise!

The Eldar deployed entirely in the eastern third of the table, to help ensure that their outnumbered forces would not be separated and defeated in detail. Also, we set up each of the 4 Waygates within 36" of another one, to assist all the psychic activity we hoped to rely on. (Within 18" of a Waygate, Eldar psykers would automatically pass psychic tests and gain a strength bonus to strength-based psychic attacks.)

Below, from left to right, Mike's, Noah's and my forces stream out of their respective Waygates (we had models to represent two of these assets, and markers for the remainder). 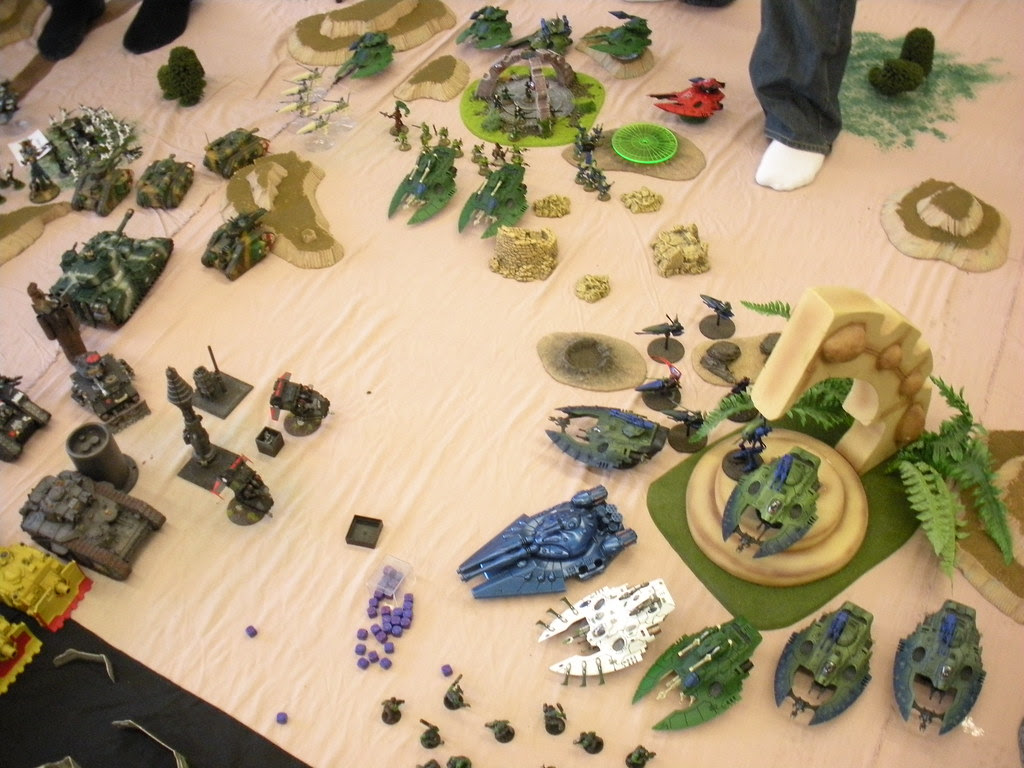 Mike's forces quickly coming to grips with the enemy. 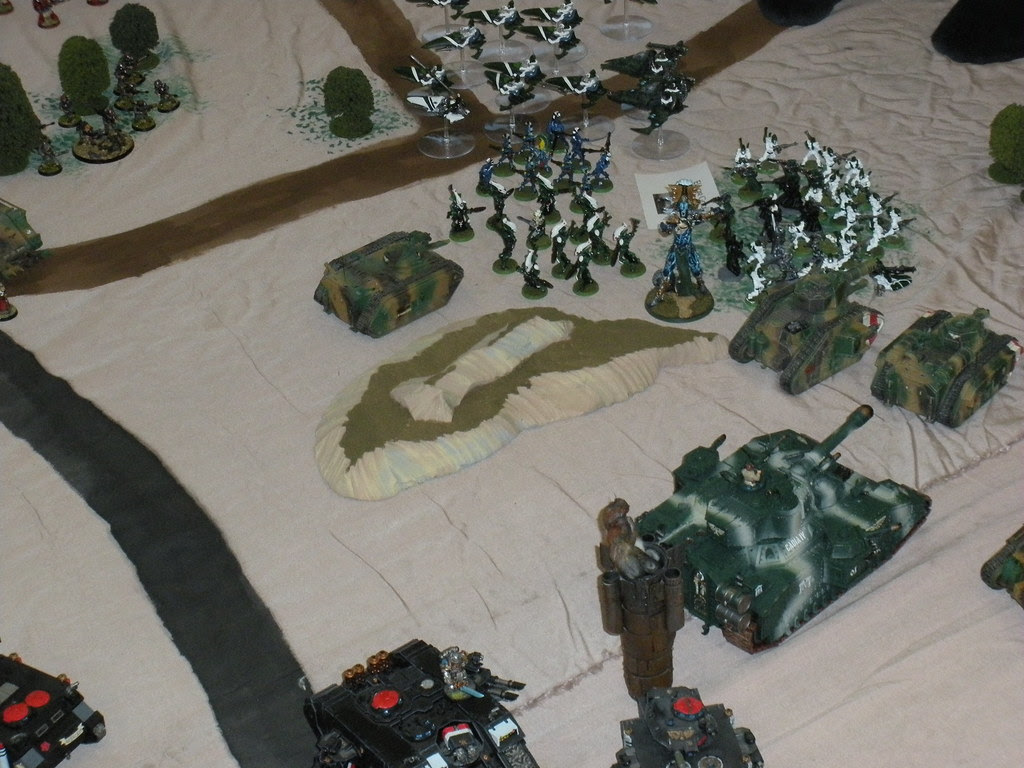 Looking at how the battle was shaping up, the Eldar decided to concentrate their efforts against the Imperials. After Noah dropped an orbital strike and I fired the Scorpion's Pulsars, the 6-gun Vindicator battery was reduced to one effective gun. 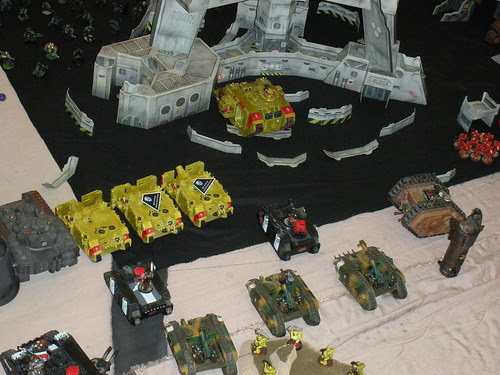 Later, the Imperials dropped several drop pods worth of Marines and Dreadnoughts in the middle of the Ork city, to take pressure off the spaceport and to be, basically, heroic. 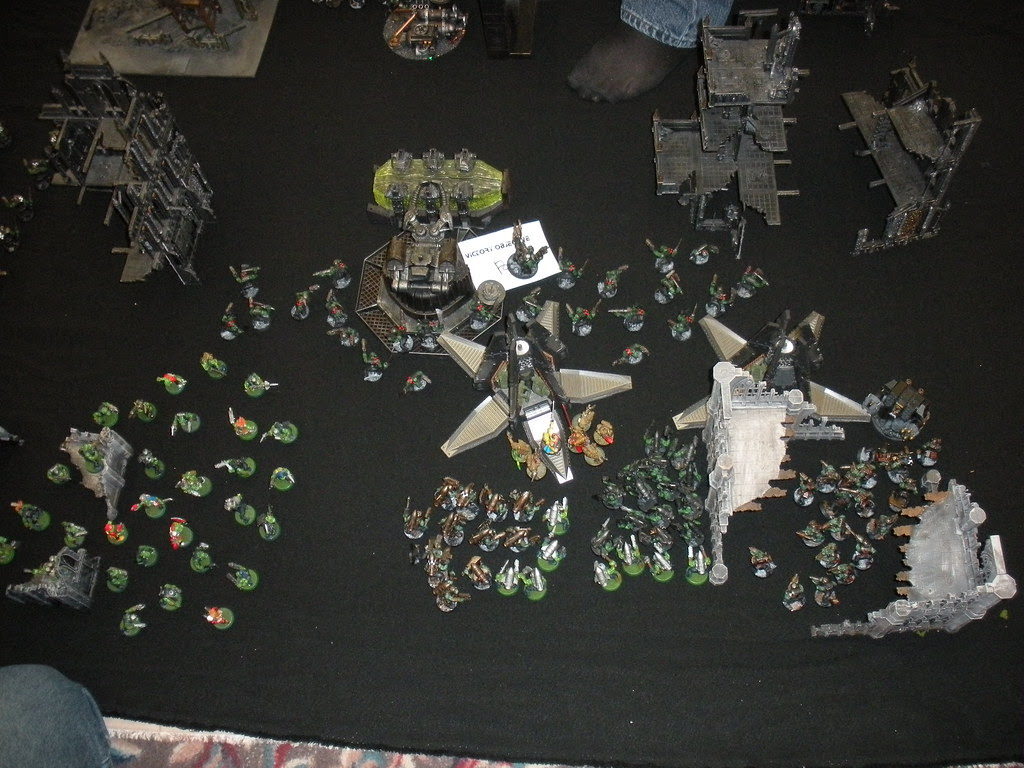 The Ork jetbikes appeared to the rear of the Titan. IIRC, they managed to damage the Warhound, but were all killed by subsequent shooting. 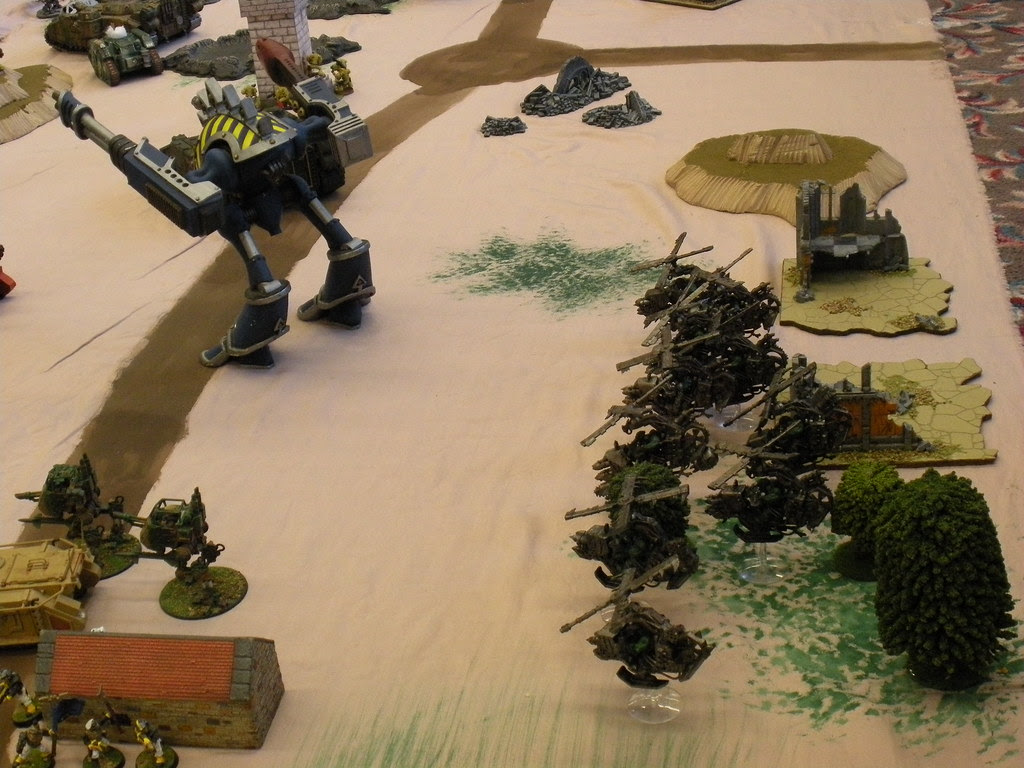 The Eldar aircraft were kept in strategic reserve. When they came on, they concentrated on the Titan and the other superheavy tanks in the Imperial rear. The Titan lost all its guns, and had a single structure point remaining. 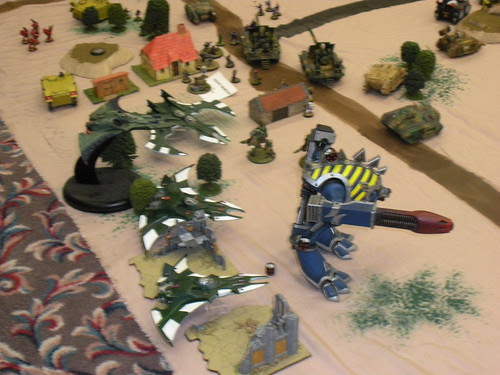 As the battle progressed, a giant scrum developed around the hill, involving the Orks vs. the Imperial Guard and some Space Marine Dreadnoughts. One Stompa cut a Shadowsword in two with one swing from its chainsaw. The big Ork vehicle to the right of the hill disgorged lots of Boyz, and the Gargant itself carried 20 or 30 more Boyz... 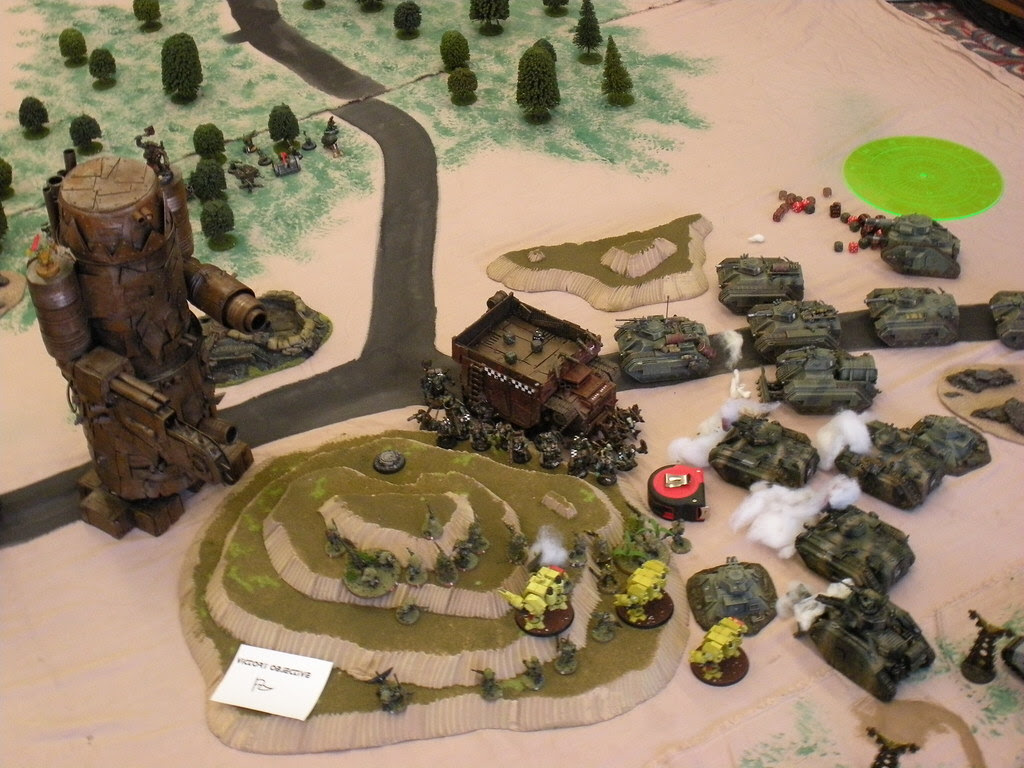 A pair of Ork Pulsa Rokkits landed beside the Malchador, the Grey Knights, and some other tanks, temporarily reducing their BS to 1 due to the seismic effects. Ouch!

The large open area in the middle of the photo below was the former location of a Baneblade and several of Noah's Aspect warriors, consumed in the explosion of the Baneblade's reactor. 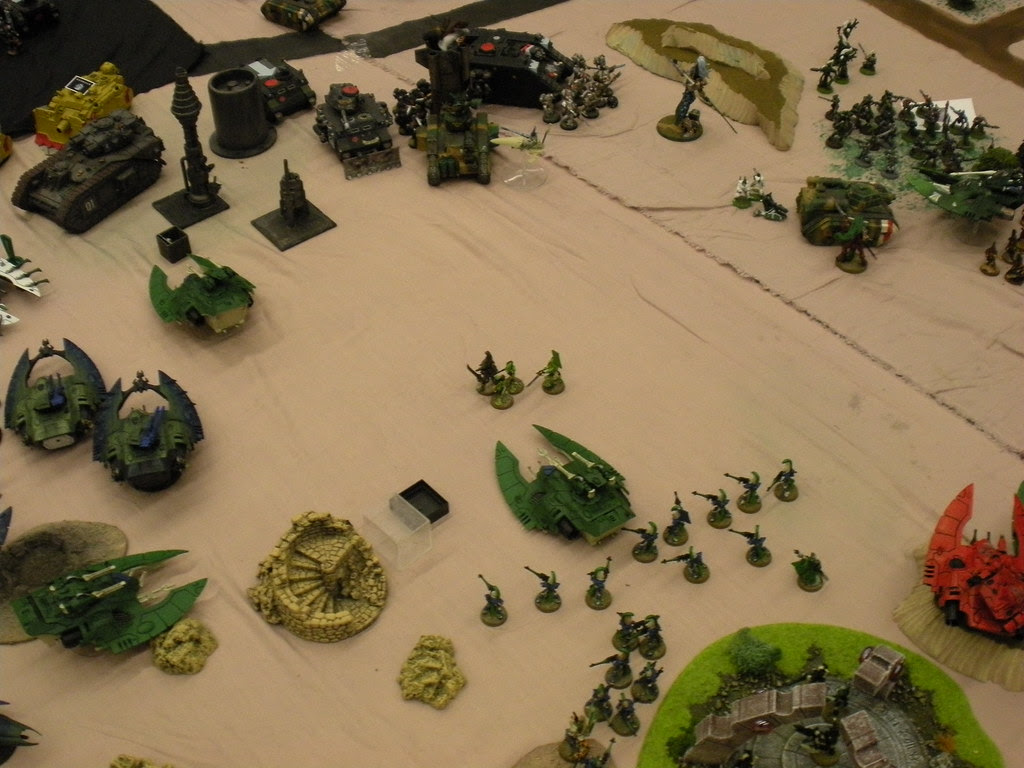 As the game progressed, the Scorpion superheavy tank and a mounted Seer Council led the Aspect Assault Wave towards the spaceport, which was protected to the east by the Malchador and the remaining Vindicator. The Malchador expended its fire against the Fortuned Seer Council. 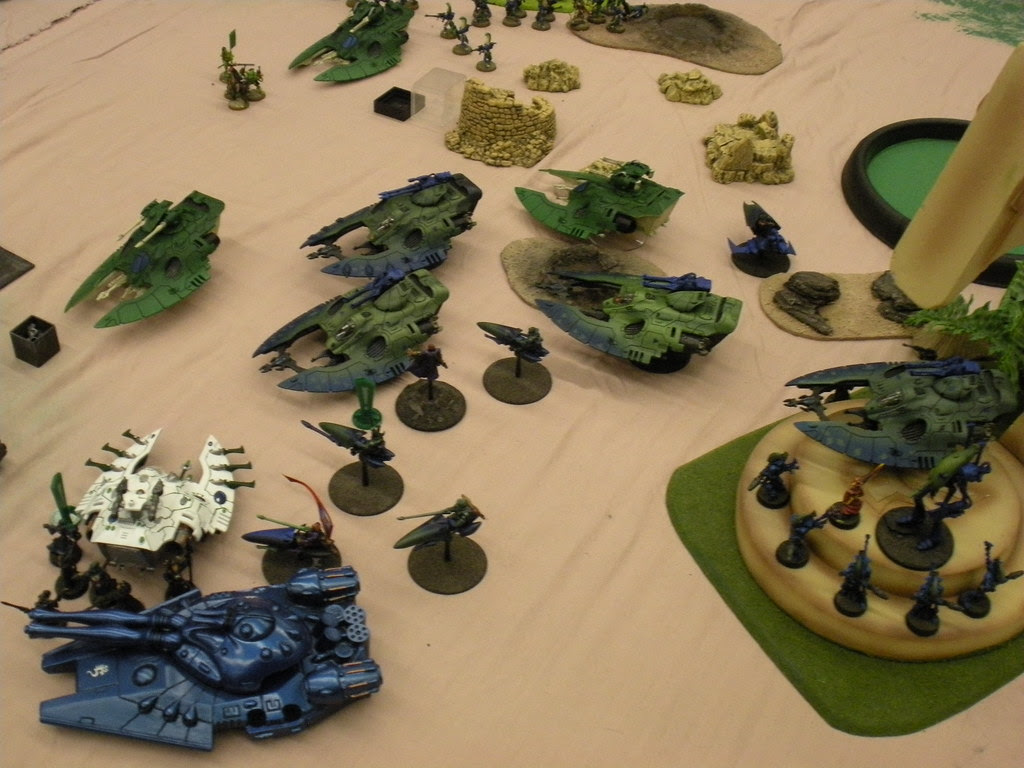 After several rounds of epic close combat, the Marines finally took the Ork-occupied city. Only a few Battle Brothers survived to celebrate their glorious accomplishment. 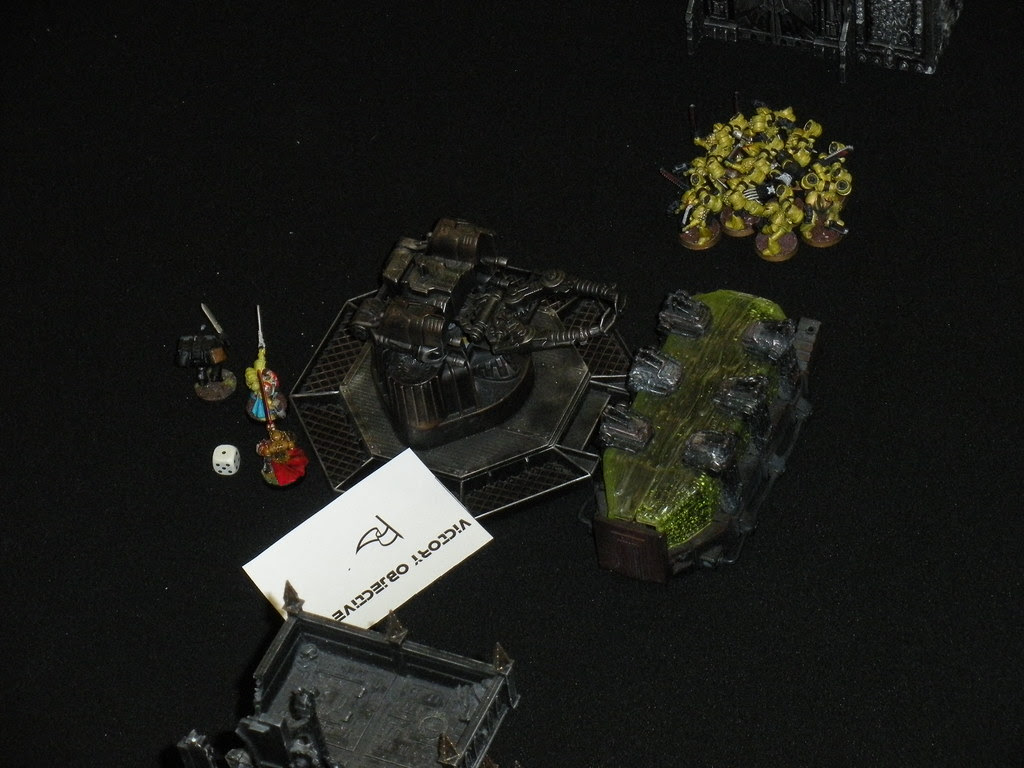 In the centre, the Green Tide had been greatly reduced by the staunch Imperial defenders of the spaceport. 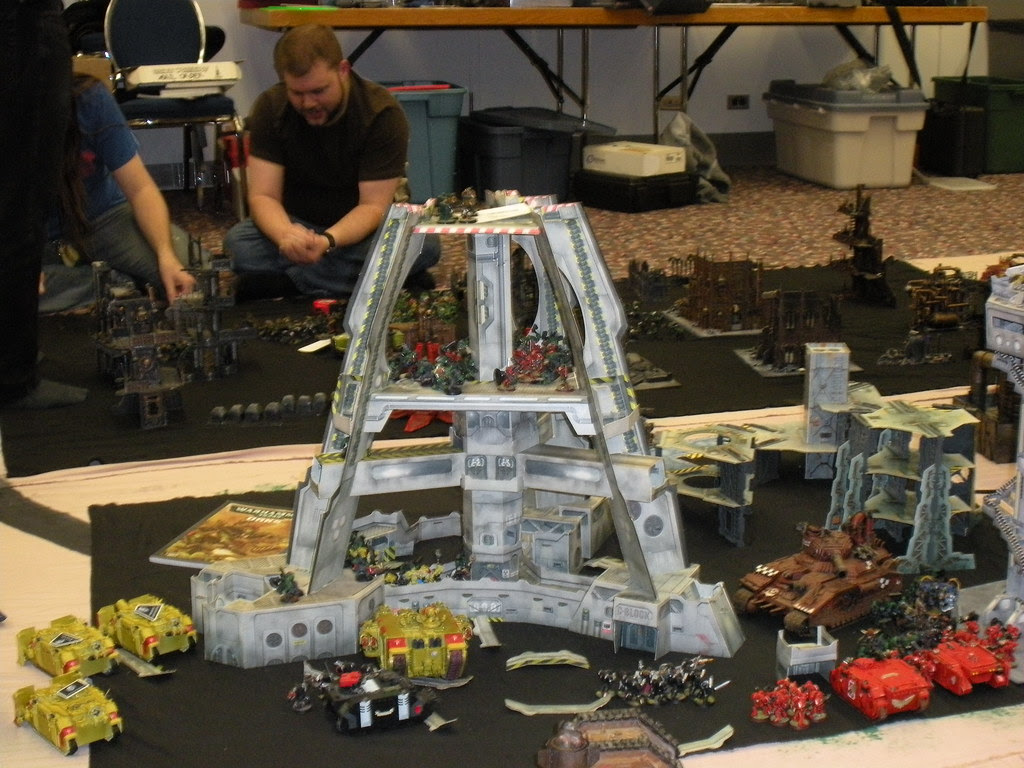 As the final Eldar turn started, the Eldar declined to buy any more assets and gave all their 19 victory tokens to the Orks. The Ork generals, being badly behind the Imperials, gladly accepted those tokens.

With the numbers of active/effective forces around the spaceport so reduced (the Green Tide was almost completely gone), the Scorpion superheavy tank led several other Eldar units in to capture the spaceport without firing a shot. The subsequent victory tokens for holding the spaceport would thus be denied to the Imperials. 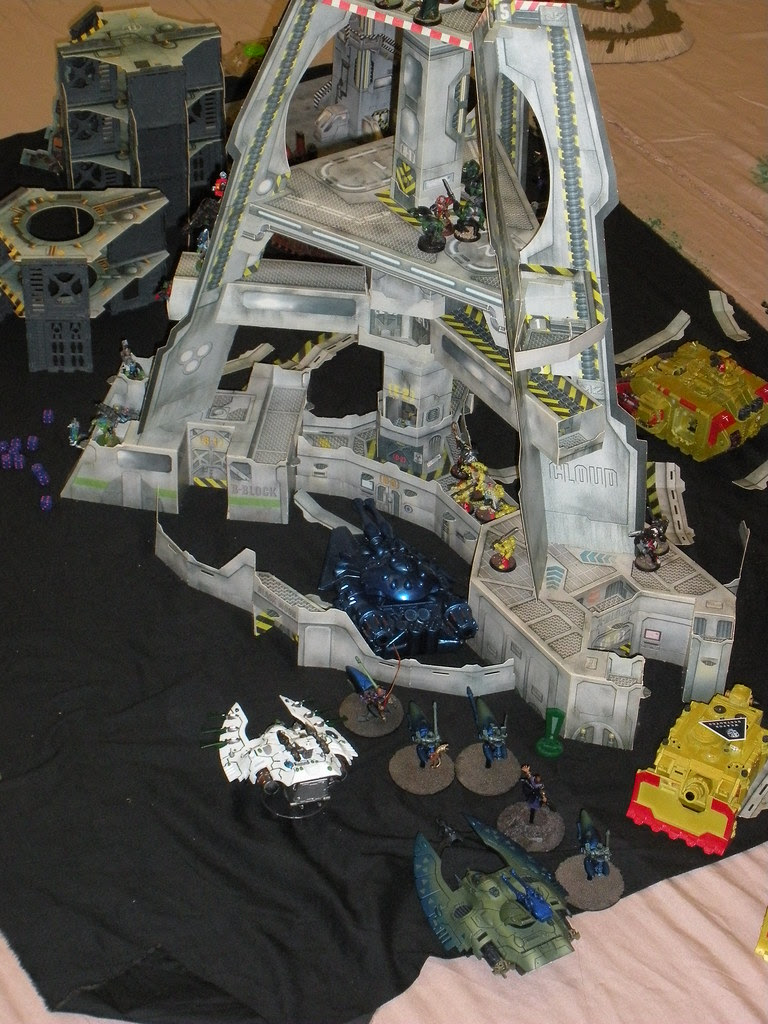 Below, Mike's Eldar forces move away from their own Waygate, ceding it to the Orks. In this way, the Orks would gain a few more victory tokens. 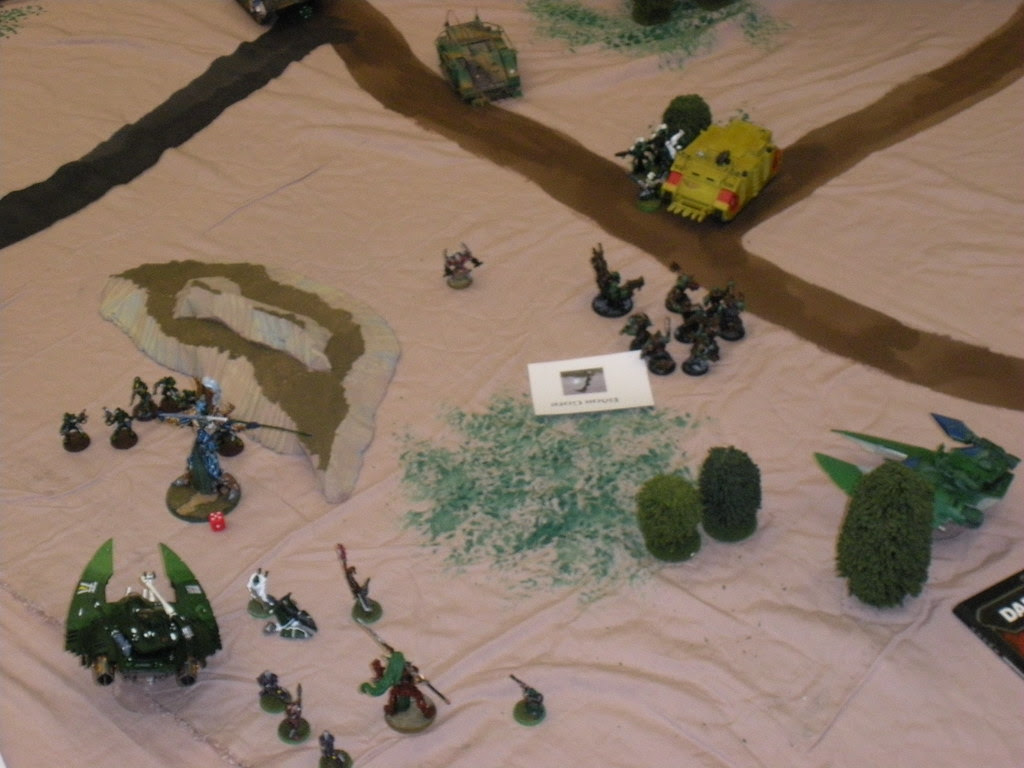 Mike redeployed his 3 aircraft to the rear of the damaged Gargant, destroying it with massed Bright Lance and missile fire. This loss put the surviving ground forces around the hill at rough parity, so in the end no one controlled it - it was merely contested.

To the southwest, a unit of Thunderhammer/Stormshield Terminators had been holding a strategic bridge. Three squads of deep striking or jumping Swooping Hawks poured grenade and Lasblaster fire into them. The Marines rolled too many "1's" to keep the bridge. Derek's Hawks alone killed 3 Terminators: 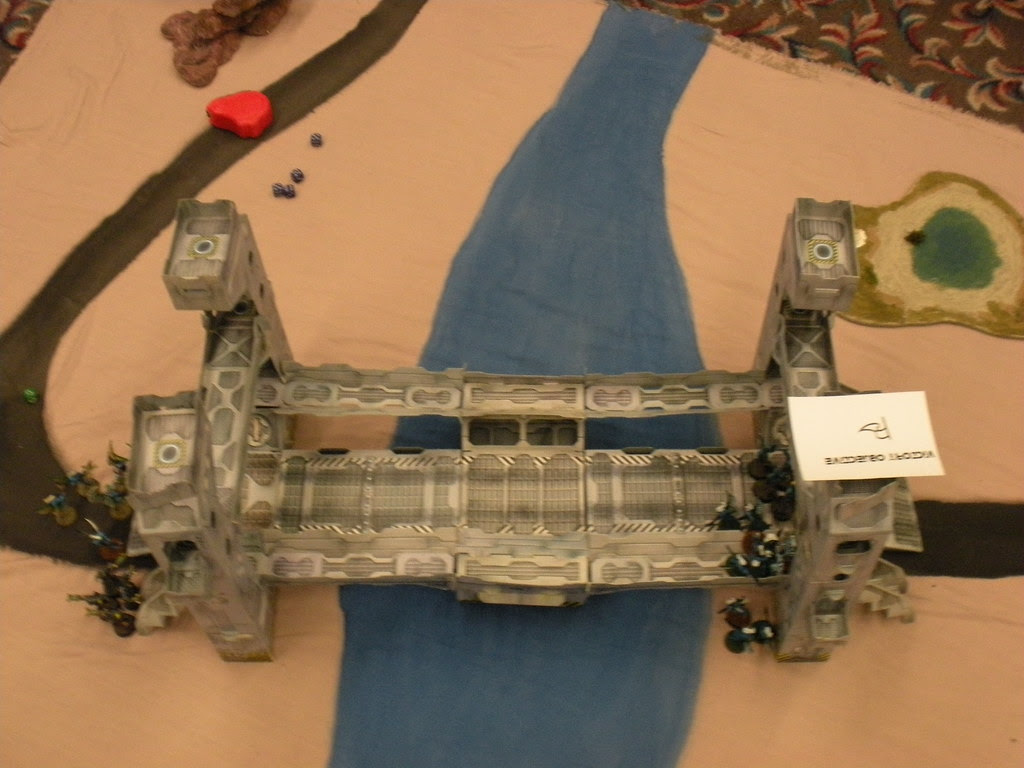 Derek's forces held onto the Waygate located within the collection of red buildings below: 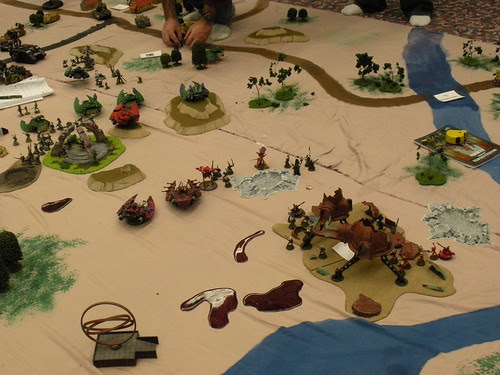 In a final show of Eldar disdain, Noah fired the Fire Prism battery at the weaponless Warhound Titan, destroying it. This had no effect on the outcome of the battle; it was merely esthetically pleasing.

As the final victory tokens were tallied, the Imperial forces ended up with 61 tokens, 6 more than the Orks. The Eldar players revealed their scenario card, and the Eldar managed to steal away the win.

The Eldar victory conditions were very interesting. The Eldar forces had to manage their victory tokens and assets very carefully, and fight (or decline to fight) at the appropriate times. Kudos to Noah, who kept track of all the victory tokens won, expended and traded each turn by all three factions.

This was also the largest 40K game I have ever played in. Despite it being a floor game, no one's models were actually crushed underfoot. Phew!

Everyone involved seemed to have a fun time. I certainly did.

Good job. I've never played in a battle that big, Apocolypse is quite popular in Vancouver but I and my army are vehicleless. Well my army has some model vehicles.

Anyway I have no superheavies and concentrate on 1500 pt Astro sized games whenever I manage to play at all which is rarely.

I'll have to get this Diseased Sons out in volume one day. Maybe in a year or two.