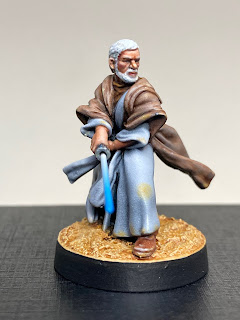 Star Wars: Legion does not have a model for Obi-Wan "Ben" Kenobi, as he appeared in the original 'Star Wars' movie.

Last year I purchased from Order66miniatures on Etsy three different 40mm size prints for that Old Fossil, all 3D sculpted by Madox 3D (Felipe Manivel). (This particular pose seems to be taken from the Star Wars: Rebels episode entitled "Twin Suns", when Ben finally defeated a half-prosthetic Darth Maul.) This year's Painting Challenge prompted me to finally get some paint on this figure.

Ben is a very nice print, with a dynamic pose, good anatomy (check out the face and those hands), and almost completely unnoticeable printing lines. I really like the flowing robes and tassels. I just used some brass wire for the lightsaber blade, instead of the resin one; I have real doubts about the separate resin blade holding up to gaming. I shaped the blade tip with a diamond dust file, which worked a treat on the soft metal.

I did my usual black priming with GW Chaos Black, and airbrushed zenithal highlights with Vallejo Dead White.  Face and hands were under painted in Vallejo acrylics, with details and blending in various artists' oils.

I do have the book Star Wars Costumes: The Original Trilogy, which has nice colour photos of Ben's costume.  I went with lighter values for his shirt, under tunic, and hooded robe, as opposed to the movie colours. Did some detailing with Payne’s Grey and Titanium White oils for the under tunic. Ben's brown robe was finished mostly with a few washes combining GW's Agrax Earthshade and Reikland Fleshade. I weathered his clothing, adding stains and little tears using artists' oils. 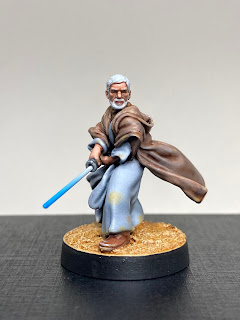 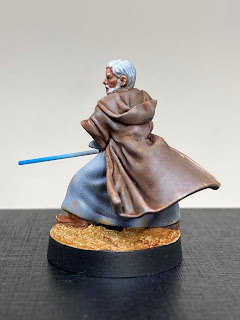 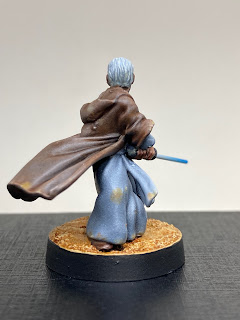 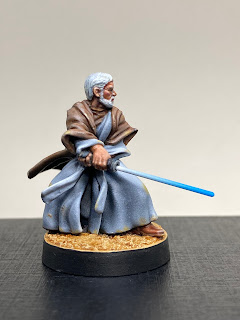 I have now painted 5 figures sculpted by Felipe, all taken from the original 'Star Wars' in 1977. Madox has a couple of Patreon pages,  illustrating his interests in both Space Wars and the Seven Years War. 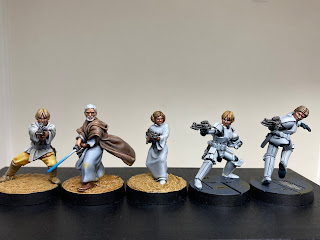 Scoring: 7 points for a 40mm figure (Darth Vader is over 45mm tall!), plus 20 bonus points for Death Star (Hubris). Hubris, thy name is Obi-wan Kenobi. Hubris to think he could properly train young Anakin, hubris to hold the the Jedi order's myopic worldview, and hubris to try and control the information that he provided to Luke. Plus, the Death Star is the location of Kenobi's final duel with his former padawan. Total = 27 points for this year's Challenge.

Star Wars: Legion only has rules for Obi-Wan Kenobi as a much younger man, representing him as a Jedi Master and General during the Clone Wars. The character's rules and command cards reflect this. I belong to an unofficial Star Wars Legion Custom Cards group on FB. Member Charlie Soden came up with some interesting cards to use Ben Kenobi during the Galactic Rebellion era, a generation after the events in the Clone Wars. Ben is less of a juggernaut in close combat, moving more slowly and inflicting less raw damage. Ben is still very much a master of defense, and is much more adept at using the Force, including the mysteries of becoming a Force ghost. (Note that there is a slight error in the character card below; Master of the Force: 2 allows the readying of 2 Force powers.) 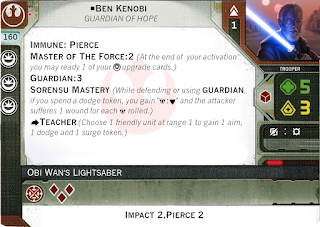 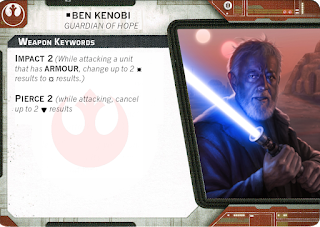 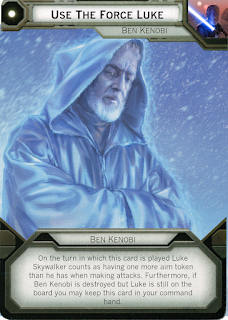 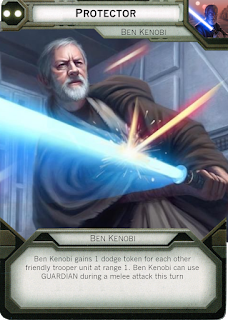 I love how you paint the lightsabers, Dave!

Ben’s pose seems to be from the episode of Star Wars Rebels entitled “Twin Suns”, where Obi-Wan finally defeats Maul for the last time. There is some great commentary by showrunner Dave Filoni and Maul voice actor Sam Witwer: