In my post from last week, we saw a major buildup of my Bolt Action Soviet tank forces. This week we are looking at giving the Soviet infantry some much needed firepower. All of the figures and weapons in this post are from the Plastic Soldier Company's 28mm range, specifically their boxes of 'Russian 45mm Anti-Tank Gun' and 'Russian Heavy Weapons'.

The Plastic Soldier Company's range are an inexpensive alternative to metal, or even multi-pose plastic figures, although I do find some of the poses remind me of the cheap toy soldiers I owned as a young boy, especially those cast as a single piece. They are fine in length and width, but a bit lacking in depth. All of the figures were assembled, mounted on bases (with the exception of the anti-tank gun crews) and primed black using a rattle can. I painted them using acrylics from the Vallejo Soviet Paint Set. Finally everything was hit with Army Painter Strong Tone Quick Shade. The Quick Shade leaves everything with a glossy finish, so when the weather is warmer I will be taking these outside to give them a coat of matte spray to dull them down a bit. 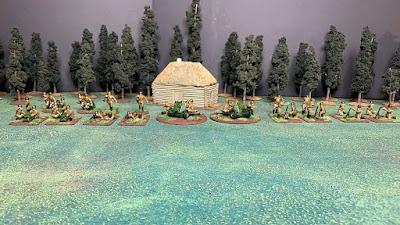 The Russian 45mm Anti-Tank Gun box contains 2 guns and 8 crew figures. Each gun sprue has different barrel options to allow you to build any of the following: 45mm M1937 anti tank gun, 45mm M1942 anti tank gun or 76mm M1943 infantry gun. Since I am current working on an early Operation Barbarossa theme, I built my guns as the M1937 version. The set also contains ammo boxes, both live shells and spent casings, as well as a rifle and sub-machine gun to add to the ambience. Since the bases I used for my guns were getting a bit crowded, I shifted some of the ammo boxes to the medium mortar bases, and the rifles to the machine gun bases. 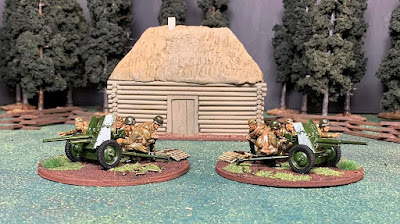 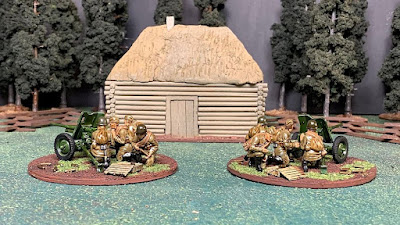 За Родину (For the Homeland) Thanks for reading.
Posted by FrederickC at 7:50 AM

Very nice, I've got a set of the AT guns in my own collecion. Excellent value

Nice work Frederick. Looks like that Quickshade works a treat!

Great work, Frederick. I also like the variety of weapons, especially the AT rifles.

This was great Frederick - nice variety of weapons. As Dallas said, the Quickshade seems to be working great!