"You don't know the power of the Dark Side!" - Challenge Submission #3 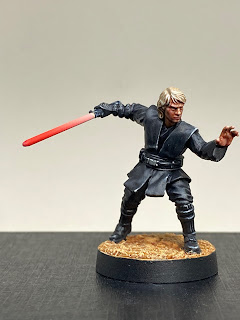 Star Wars: Legion has a very nice injection-moulded plastic model of Anakin Skywalker as he appears during The Clone Wars and Star Wars Episode III: Revenge of the Sith. There are optional parts for a couple of cool poses. However, I decided to paint Anakin in a kind of "What if...?" scenario, as a somewhat older Darth Vader, who came out of his original fight with Obi-Wan in better condition, and does not usually need his armoured suit.

I assembled the pose with Anakin holding his lightsaber in his right hand, and casting a Force power with his left. The only gaps needing filling were across the shoulders of his tabard. I also set aside for use the head option with a more neutral expression.

I black primed with Chaos Black, and airbrushed the lightsaber with Vallejo white, fluorescent orange, and red. I laid in zenithal highlights on the head with Vallejo Dead White. After affixing the head, I underpainted Anakin's face and left hand in Vallejo acrylics, with details and blending in artists' oils. I gave him greying hair, and made the sculpted facial scar fresh using Alizarin Crimson.

I painted the tabard, right glove, and boots with Vallejo Grey Black. Light highlighting and details were added for his clothing and gear using artists' oils. 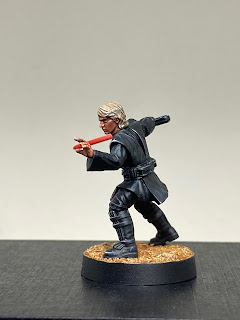 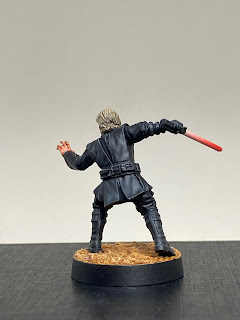 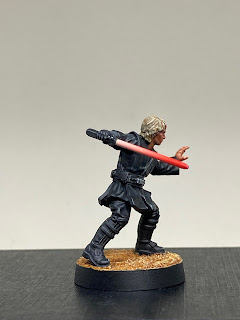 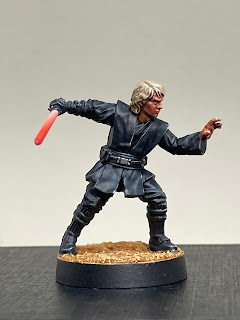 This is a similar project to my last year's submission of a young(er) Count Dooku, modeled when Jedi Master Dooku had just left the Order to defend his home planet. In Star Wars: Legion, the Anakin Skywalker character is part of the Grand Army of the Republic faction. I plan to use this version of Anakin/Vader as part of the Empire faction, using the rules for Vader’s Operative form. 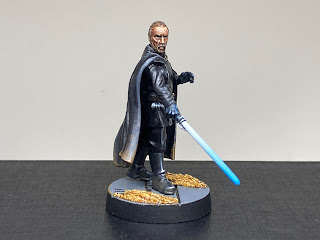 Scoring: 7 points for a 40mm figure, plus 20 bonus points for Istvaan V: Betrayal; Heretical/Heretics or Loyalty/Loyalists. In either his canonical or this AU guise, Anakin betrayed his master and murdered countless innocents. Total = 27 points.

Awesome work there Dave. I love how you painted the black cloaks, really nice.

The brushwork is awesome Dave, really nice.
And the sculpting on Anakin is perfect, because I just wish someone would punch him...just like in the movies...