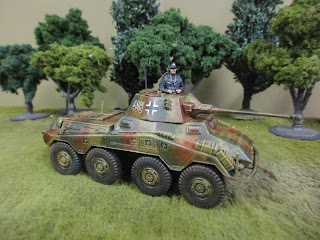 The debate rages on over what vehicle scale is "correct" for 28mm models. I've always been a proponent of 1/48, mainly because my infantry is based on thicker GW-style plastic bases, and these just look more "in-scale" with larger 1/48 vehicles. However, there are some vehicles you just can't find in 1/48, so for these I turn to 1/56. This makes sense to me because without similar 1/48 vehicles to compare, the size of the 1/56 vehicles looks OK. Makes sense? Good... 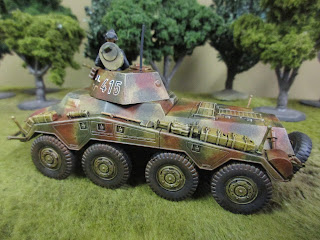 Here we have a 1/56 Sdkfz. 234/2 "Puma" armoured car from Warlord Games/Italeri. I note the Italeri connection in particular here because this model is truly a 1/56 scale model kit, not a purpose-designed gaming piece. The vehicle's suspension is extremely well detailed and full of tiny parts that reward care in assembly. 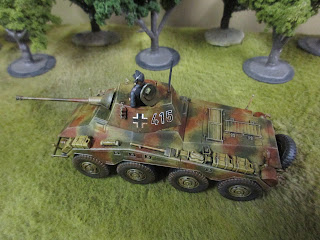 Painting was more fun than building, in this case, although assembly took only one evening. The model was painted in a classic 1944 German three-colour scheme, with Zandri Dust, Doombull Brown, and Castellan Green washed with Agrax Earthshade. Tires were painted Vallejo Dark Rubber, a really great dark-grey colour. 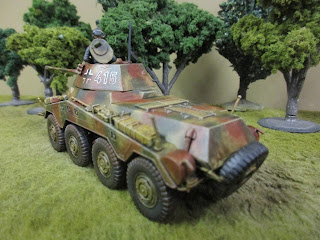 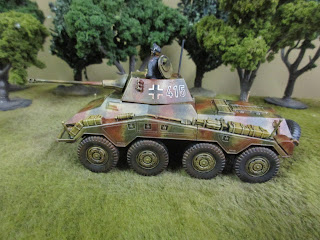 Decals were supplied by Warlord with the kit and worked fine. After application the model was lightly weathered and matte spray varnish applied. 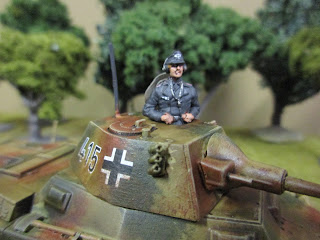 The kit even includes a commander figure. I had momentary indecision over whether to paint his uniform Panzer-crew black or SP-gun crew field grey - apparently armoured car crews were spotted wearing both - but opted for Panzer black after all.
Fun facts about the Puma... apparently it was never actually called (either officially or by the troops) the "Puma"! The turret was adapted from the cancelled "Leopard" VK1602 recce tank. There's Teutonic efficiency for you. Also, the vehicle was a quite modern "monocoque" design with the armoured hull serving as the chassis, rather than the armoured body being bolted to a frame as on previous designs. And last, logic prevails with this recce vehicle as it has two driver positions - front and rear - allowing the vehicle's radio operator to speedily extricate the Puma from danger by reversing out of troublesome situations.
Posted by Dallas at 1:30 PM

I wonder how difficult it was to maintain such a complicated set of wheels and steering under field conditions.

Also, I will have to get some of that Dark Rubber paint.