I decided to enter the Challenge's Hall of Traps with this entry, Count Dooku. In almost every Star Wars film, at some point the protagonists come face to face with an enemy Force user, lying in wait for them with an ignited lightsaber. 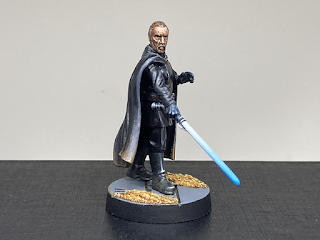 This ~40mm ("1/47 scale")  model from FFG is a very nice likeness of Sir Christopher Lee, who played the role in Episodes II and III. However, I chose to paint the figure not as Dooku appeared in the Star Wars prequel trilogy, but as he appeared when he first left the Jedi Order. This is recounted in the radio play & novelization, Dooku: Jedi Lost, set over 40 years before the events of Star Wars Episode IV: A New Hope. Dooku left the Jedi Order to aid his sister when neither the Republic nor the Jedi would help her when her planet was attacked. So, I rendered him as a man in his middle age instead of old age, armed with his then-signature blue bladed dueling saber.

Keeping the colours minimalist, I airbrushed zenithal highlights onto the figure's head, and airbrushed the lightsaber colours before attaching the right arm. I under-painted his face in acrylics to set the contours of his face, then painted it in oils. 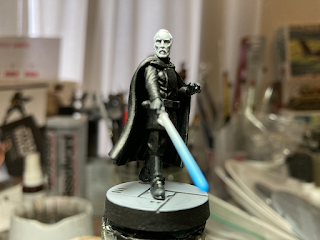 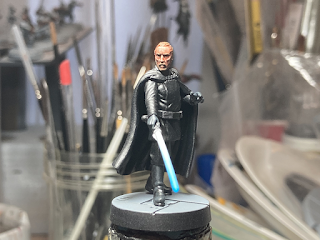 His clothing, boots, and gloves got 3 different tones of black, and I finished with some highlights, shadows, and details in oils. 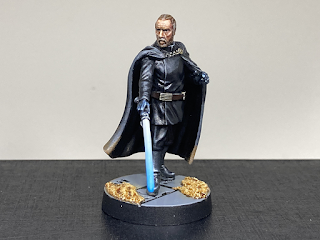 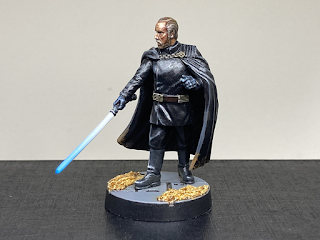 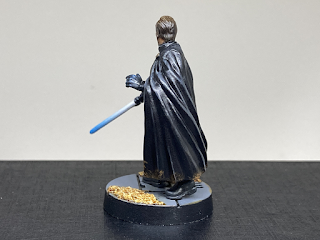 This figure, plus associated time portal shenanigans, will make for an interesting encounter for players in my nascent Star Wars Legion campaign setting.