A Company of Gondor

The latest unit off the workbench is a company of Gondorian infantry from the Game Workshop Lord of the Rings range consisting of eight swordsmen, eight spearmen, eight bowmen, a captain and a standard bearer. The captain and standard bearer are metal castings, while the rest are plastic from the Warriors of Minas Tirath boxed set.

The plastic warriors were a bit of a rescue operation. When I purchased them off of eBay they had already been assembled and given a coat of silver paint over just about everything. No ground work had been done, and there were still a lot of visible mold lines and rough spots where the parts had been attached to the sprue.

The figures were cleaned up, mold lines filed off, ground work added, and primed matt black with a rattle can. The theme of the ground work was inspired by scenes from the Lord of the Rings movies of the heavy fighting among the ruins of Osgiliath - lots of rubble, broken stone work, etc. This was done using scraps of 3mm polystyrene, bits of sprue, sand, and pieces cut from bread bag plastic clips.

Just a small portion of the faces show within the helmet, so they were painted Vallejo medium flesh, followed by a brown wash to bring out the detail. The figures are wearing predominantly plate armour, so I painted them gunmetal grey followed by a drybrushing of silver. The trickiest part was painting the white tree of Gondor on the shields. While there is a raised design, it is very subtle, and it needs just the right amount of paint on the brush to avoid blotching silver on the background.

The captain and standard bearer were somewhat easier to paint as the detail was in higher relief on the shield and the standard. Otherwise, they got the same treatment as the rest of the figures in the company. 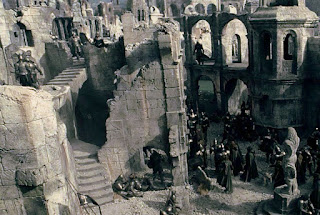 A scene from the movie "The Two Towers" - Warriors of Minas Tirith amid the ruined city of Osgiliath. It provided the inspiration for the thematic ground work that I applied to bases. 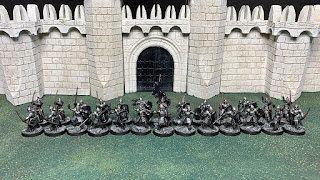 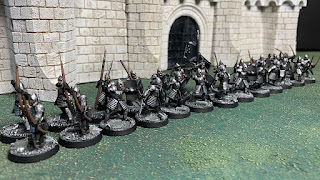 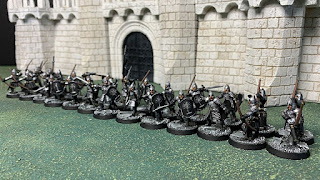 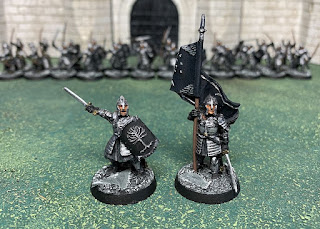 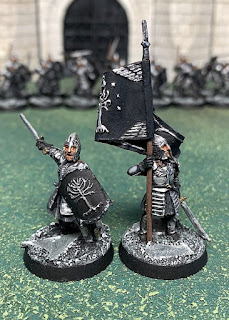 This is another project that has been hanging around for a while at a back corner of my workbench where it was literally gathering dust. They are now ready for the fight to reclaim Osgiliath or defend the walls of Minas Tirith from the hordes of Mordor.

These models look great, Frederick. I also really like the fortress walls in the background.

Great job bring some figures back into service!