Balin, Son of Fundin, Lord of Moria and Khazâd Guard

Another Lord of the Rings project off the Dusty workbench - Balin, Lord of Moria and his bodyguard. Six of the 11 Khazâd Guard were painted several years ago. Following their completion, I acquired five more off of eBay, along with the Balin figure. 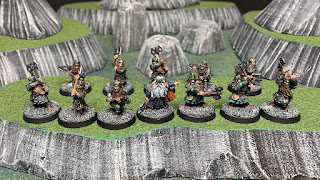 "Balin, son of Fundin of the folks of Durin, was one of the most famous Dwarf heroes of his day and age. He led a Dwarven contingent to reclaim Khazad-dum, the greatest of all the lost kingdoms of Dwarves. Initially he was sucessful and was crowned Lord of Moria, but later he was ambushed by goblins and slain. Not until the Fellowship discovered his grave would the rest of the world discover what had occurred those long years ago." 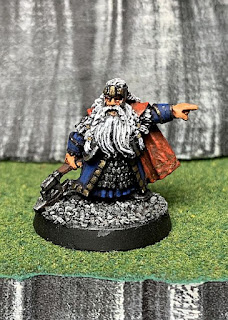 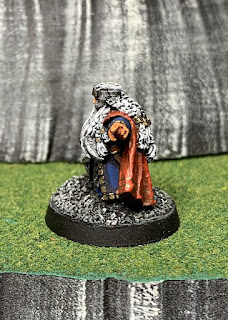 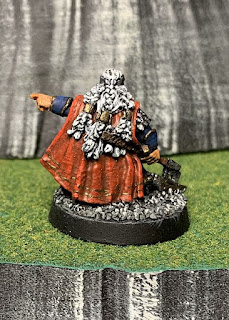 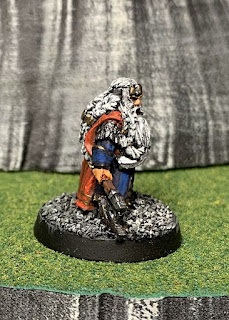 When painting, I sometimes find certain miniatures are a bit tedious. However, this was a fun figure to paint. Starting with a black primed figure, I layered on progressively lighter shades of the different colours until I had the look I wanted. I especially liked the detail in Balin's beard and hair braids. A very impressive sculpt, I completed it in an evening.

"Those that form the Khazâd Guard are handpicked from the toughest warriors. Setting aside ties to their kinband, these warriors take new oaths to serve and protect their king, no matter the cost. In combat these battle-hardened veterans wear terrifying war-masks and don coats of Mithril armour, making the Khazâd Guard the most fearsome warriors available to a Dwarven army. Their only duty is to preserve their Lord." 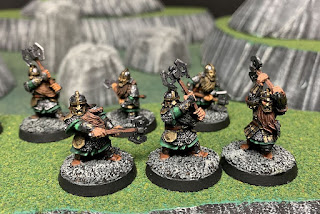 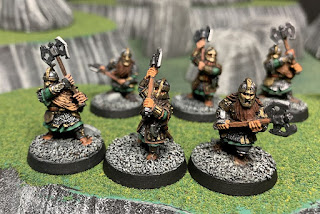 The original six Khazâd Guard were purchased as three-figure blisters, but the last five were another eBay rescue. They were rather poorly painted without the original figures being primed, and then a thick layer of model railway 'ballast' was added to the bases that partially buried the figures' feet. I was able to buy them for the minimum bid, but the seller then shipped them with the 'minimum amount of packaging'. He simply tossed them loosely into a padded envelope and put it in the mailbox. As one might expect, this did not go well. All the figures were bent where they attached to the base, one base was cracked, and one figure that was holding his axe overhead had the axe broken off.

The five miniatures were cleaned, carefully straightened again, some of the excess ground work scraped off, and the broken axe repaired using my pin vise hand drill and a short length of florist's wire. They were then primed black and painted in a colour scheme to match the earlier six Khazâd Guard that I had done. This involved lots of gunmetal, followed by silver highlighting on the chainmail armour and weapons, brass on the helmets and plate armour, green tunics and grey trousers, a base of dark brown on all the hair and beards, then drybrushed with different lighter browns to give the company some variety. 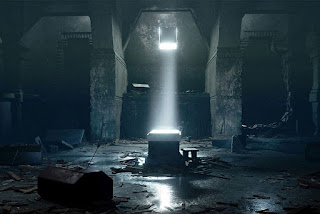 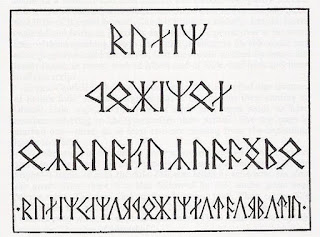 I have a company of Dwarves waiting in the wings, but next up will be some Dwarf Heroes. I am looking at a campaign of the re-conquest of the Mines of Moria once we get back to gaming again. Until then, stay safe and healthy.

Well done! I look forward to your Moria campaign!