From the Challenge: 1/50 Solido Panther in Winter Camo 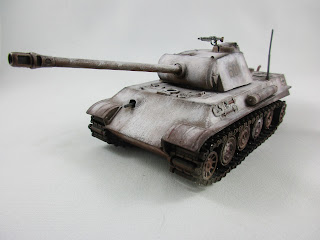 This was my entry for the "Golem's Haunt", which calls for something "bolted together"... ha! 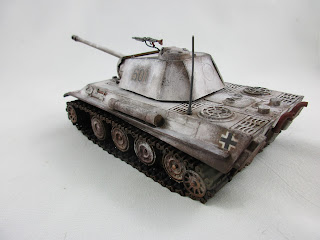 The story behind this model is that I ordered myself a Christmas present at the start of December - some 28mm WW2 Winter Germans from Offensive Miniatures. Of course my present hasn't arrived yet, but I thought I would start to work on the project anyway, and got cracking on this Solido Panther. 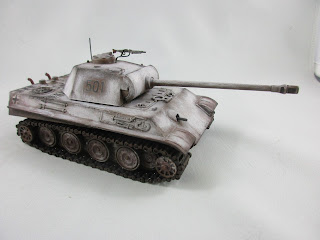 The only thing I had to do on the model was to add the pintle-mounted MG42, as it was missing. Yes, I know that the pintle mount should be attached to the cupola and not to the turret top, but there was already a hold drilled in the turret top so I thought I'd take advantage... the machinegun came from the very handy Bolt Action weapon sprue included in their boxes of plastic Germans, and the pintle mount itself is wire bent to shape and secured with superglue. One of the things I always liked about Solido tanks is their chunky metal tracks, and how easy they are to remove and paint separately. This model's were no exception. 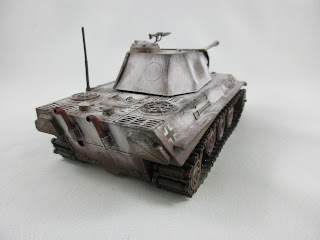 Winter camo followed my usual method with a bit of a twist - instead of stippling on the Rakarth Flesh and White Scar, I applied it in more of a top-to-bottom brushing style. Maybe this makes it look more like field-applied whitewash. However I think I maybe should have lightened up the dunkelgelb basecoat a bit more before applying the camo. I also sponged on some weathering on the sharp edges and dirtied up the lower hull. 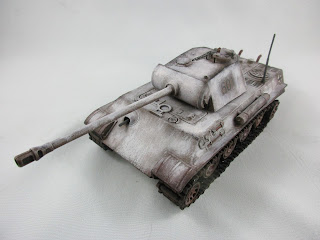 So there it is - one winter big cat waiting for its accompanying infantry. Hopefully they arrive soon, after all it's only been a month and the parcel HAS had to travel all of 850km [rolleyes]
Stay healthy everyone!
Posted by Dallas at 1:40 PM

Great work on this beast Dallas!

Nice "big cat" for WWII. I look forward to seeing it in a game of What a Tanker! or Bolt Action.