Denethor, Steward of Gondor and Guardsmen of the Fountain Court

I returned to Gondor for a quick project in my continuing attempt to clear the backlog of Games Workshop Middle-earth Strategy Battle Game miniatures - Denethor II, son of Ecthelion II, 26th Steward of Gondor, and an escort of three Guardsmen of the Fountain Court. 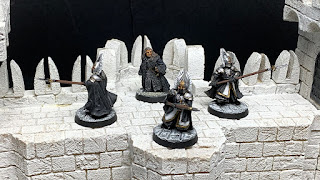 Denethor, Steward of Gondor - "Once a great man, the Steward of Gondor is now weary with the responsibility of leading his people in such dark times. The loss of his favoured son Boromir has proven an unbearable pain, leaving Denethor increasingly vulnerable to despair in the face of the overwhelming odds that trouble the realm of Gondor."

The figure was initially primed in black, and then I went in with more black to ensure good coverage in all the deep recesses.. I painted the face with Vallejo medium flesh followed by a reddish-brown wash, then applied highlights of medium flesh again, and more wash very selectively around the eyes and the mouth. The cloak was painted with acrylic Payne's Grey, a very intense bluish-grey colour. Then a small amount of medium grey was mixed in and drybrushed to catch the raised surfaces. The fur trim was already black, so I just drybrushed it with a dark grey. I used a lighter gunmetal on the chain mail, rather than silver as I didn't want it to be too shiny. The hair was painted dark brown and given grey streaks to produce a look similar to the appearance of Denethor in the Lord of the Rings movies. 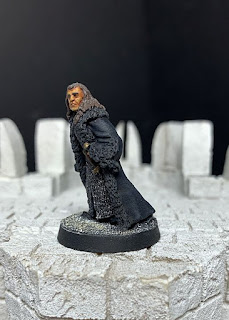 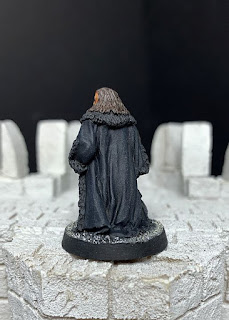 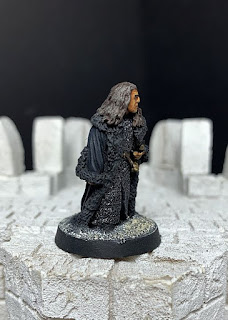 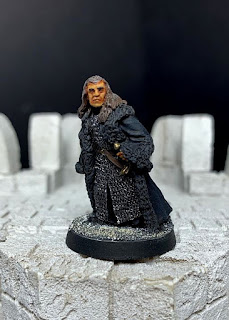 Guard of the Fountain Court - "The Guard of the Fountain Court are selected  from the most disciplined of veterans in all of Gondor, swearing to give their lives in service to the lords of Minas Tirith and to be fearless in combat. They wear winged helmets made of Mithril, intricately crafted heavy armour and carry the finest weaponry that the armouries of the White City have to offer."

Lots of black and grey on these figures, followed by gunmetal, silver, and gold trim. To get a greater contrast on the breastplates, they were first painted in a dark gunmetal, and the White Tree of Gondor picked out with silver. The gold was the trickiest part as all the shoulder armour and helmets are edged in a thin band of gold. Otherwise, the technique was much as I have used on all my other figures. The only thing of note is the paving stone pattern on the bases. This was done by first applying a thin layer of epoxy putty to the surface and sculpting in the stone pattern. The miniatures were then pressed into the slot in the base while the epoxy was still soft, and doing some additional sculpting to cover over the slot. 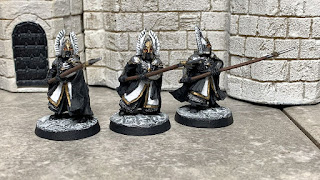 I am off to Rohan next to paint up some of the heroes of the Riddermark. This will give me another opportunity to try out different colour schemes on horses.

"Gondor calls for aid! And Rohan will answer!"

Nice work on the faces Frederick!