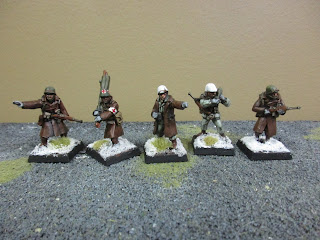 As noted in my recent Sherman post, I've been working on some winter GIs to face off against Conscript Greg's newly painted winter Germans. In this post I'll show off the Bolt Action winter US Army HQ pack and rifle squad boxed set. 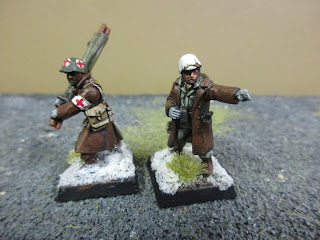 The Bolt Action HQ figures are a mix of models wearing the drab wool double-breasted overcoat, and the light-green mackinaw coat. The officer pictured above wears an M43 field jacket under his overcoat. the overcoats were painted Rhinox Hide / Mournfang Brown and the mackinaws and M43s are Catachan Green with a heavy Camo Green overpaint. 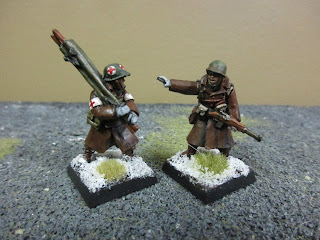 The medic with stretcher is about my favourite model from the pack, pictured here with a greatcoat-clad officer with M1 carbine. 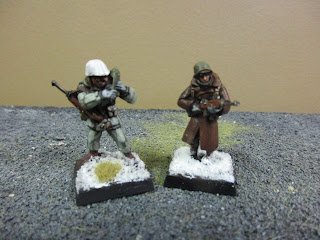 Here's an NCO with mackinaw and light green trousers holding an SCR-536 "handie talkie" radio along with a private, also armed with an M1 carbine. I gave the all the figures gloves painted grey, basically following the webstore illustration. 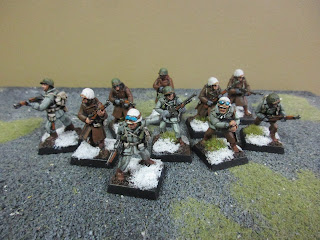 Warlord also offers a boxed set with an entire metal rifle squad. The figures are armed with a mix of M1 Garands, M1 carbines, and BARs - two of 'em for an extra firepower boost. 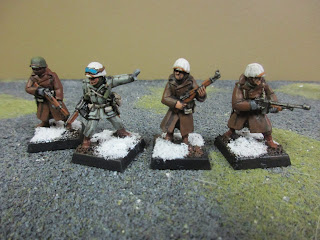 Here we have the NCO squad leader and three privates - two with Garands and one with BAR. 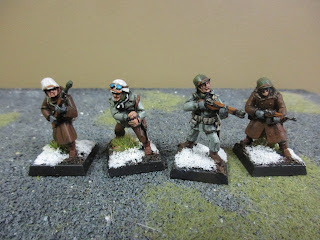 Another group including a rifle grenadier, a soldier preparing a grenade for use, and two soldiers with Garand and carbine. 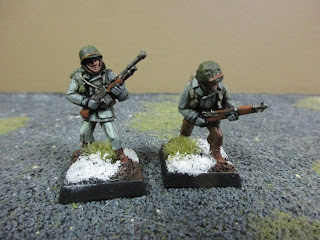 Here's the last two figures in the squad, armed with BAR and Garand. All of the models were painted following the box illustration. 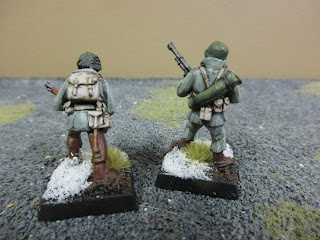 The models in the squad are all very well kitted out with packs and suchlike, really some veteran campaigners here. The Bolt Action models also come (mostly) with separate heads, which is handy if you're building multiple squads from the same boxes. It just allows a tiny bit of variety. The only awkward fit was the head on the rifleman aiming his Garand. No matter how I tried to position the head, it just looked awkward - you can easily pick him out in the pics above.

The Bolt Action stuff is generally good though, and I recommend both of these packs wholeheartedly. Most of the rest of my winter GIs are from Artizan though, and as such they're slightly beefier in build than the BA boys. You'll see soon... I'll be posting some pics of the rest of the platoon (and some support in the form of a .50 cal) shortly!
Posted by Dallas at 11:15 AM

Dallas, you're a machine! Nice job.