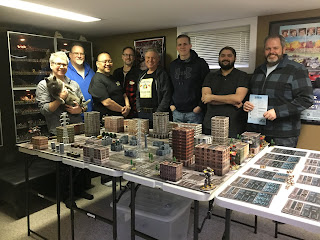 This past New Year's Day we gathered at Conscript Towers to play a big game and enjoy a big lunch! Conscripts in attendance this year from left to right: host Dallas (and Gilles), Kevin, Dave V., John, Frederick, Mike F., Indo, and Greg. Some spouses and a child even attended as well! 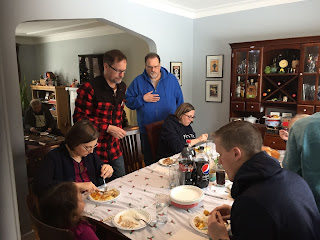 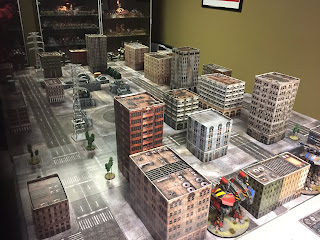 After lunch the Conscripts repaired to the basement for the game. One of my Christmas presents was the excellent "Ruinscape" terrain set made by Hawk Wargames for Dropzone Commander. Notionally 10mm in scale, the set includes 20 card buildings and 24 double-sided card terrain tiles - perfect for Adeptus Titanicus. It did take a couple hours to fold and glue the buildings, and I was thankful to have some small clamps in my hobby toolbox as they were invaluable for the construction task. 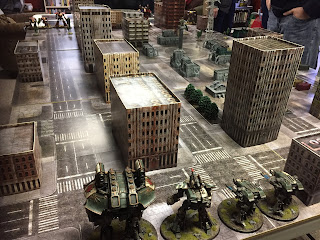 Once the buildings were assembled, I laid out the terrain tiles. They're rather thin card so are prone to move around on the tabletop, so I stuck them down to handy 2x2-foot MDF tiles with magic tape. 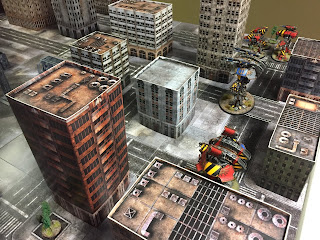 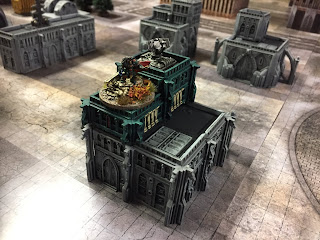 Conscript Greg had organized a scenario called "Rescue the Warmaster" - Horus is visiting his embassy building in the administrative district when Loyalist Titans of Legio Ignatum and Legio Gryphonicus launch a surprise attack. Titans of Legio Krytos and Legio Mortis are dispatched to rescue the Warmaster. Each side comprised two Warlord Titans, two Reaver Titans, and two Warhound Titans. The Civitas Imperialis buildings fit quite nicely with the rest of the terrain, don't they? 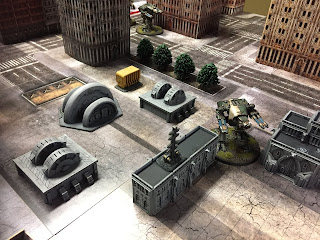 Here we see a Warhound of Legio Krytos making a run towards the Horus Embassy. Some abuse was directed toward the forces of the Warmaster for detaching a mere Warhound to rescue Horus - in the words of Indo, "Hey, what is this bullsh!t... I ordered an Uber Black!" 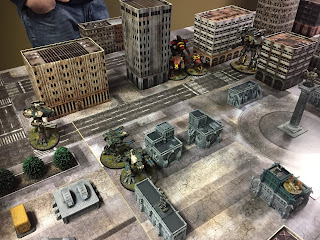 The Legio Ignatum Titans were well-deployed to target the approaching Rebel Titans, while Krytos deployment was sub-optimal... unless you consider that being away from any of the fighting enhanced the survivability of the Krytos Warlord :-) 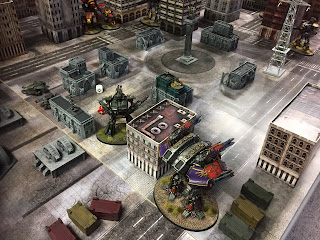 On the other flank, the Mortis Warlord advanced up the table. With the destruction of the Krytos Warhounds and heavy damage dealt to the nearby Reaver, it looked like the Warmaster would be getting his executive ride in a Warlord after all... 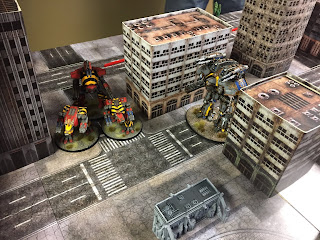 Here we see the Ignatum Reaver supporting its two Warhounds, along with the Gryphonicus Warlord. 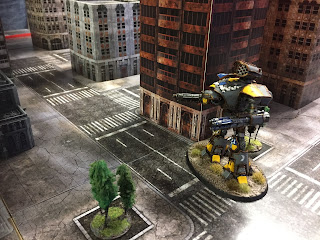 ...while in the middle, "McKillSteal" the Gryphonicus Reaver lurks, waiting to grab some stolen valour. 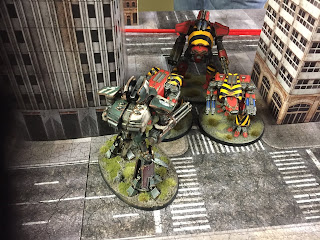 A Krytos Reaver finally gets into action, blowing up one of the Ignatum Warhounds in close combat. Sadly the fist that did so much damage would soon be blown off by the Ignatum Reaver. 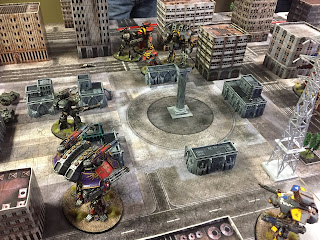 The Mortis Warlord finally in position to make its pickup. "Cripes, it's been saying 'your ride is 5 minutes away' for an hour already...!" 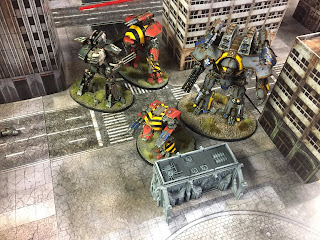 Nearing the end for the Krytos Reaver. 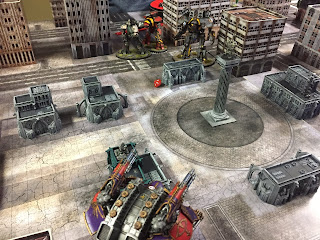 The Warlord duly picked up the Boss, but no sooner had that happened than the Machine Spirit went loony, dumping the Warlord's void shields... and that is never good. The collective abuse heaped upon the Mortis Warlord caused its destruction, but fortunately Horus made good his escape from the battlefield. No doubt the Princeps of Legio Mortis suffered some dire retribution from the Warmaster for their failure (decimation? or maybe even duo-mation?) but fun was had by all.

I REALLY like the Dropzone Commander terrain for AT18 as it seems to fit the scale well, and gives a massively good-looking battlefield for a modest outlay of cash. Having said this, I'm now looking at augmenting it with some N-scale buildings from China (cheap on ebay). I'd say five or six more buildings would fill out the 6x4 battlefield nicely and provide some further variety in scenery. Somehow the giant engines of AT18 look that much better when striding through a dense urban environment - maybe it just helps the brain take in the massive scale of these battles. Or maybe it just looks cool!!! :-)
Posted by Dallas at 10:39 AM

love it, have not played it since the ninties, the new stuff looks great!

Another fantastic New Years' game - amazing hosting once again by Pam and Dallas. Thanks so much!!

I assume McKillSteal was first to report back to the Loyalist base its Princeps and crew took all of the credit...