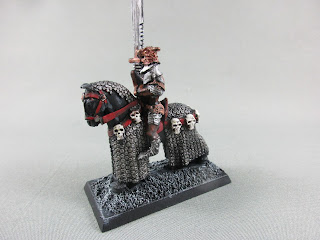 Just a couple short posts in the queue here... trying desperately to get back in the painting groove after some time away from it. I find that rather than bite off a 20-model unit it sometimes makes sense to paint a couple quick figures just to get the juices flowing again. 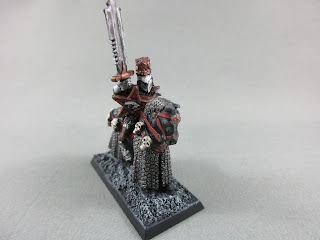 So it is with this fellow - Boarak, Death Rider of Chaos - from the old old OLD Ral Partha fantasy range. 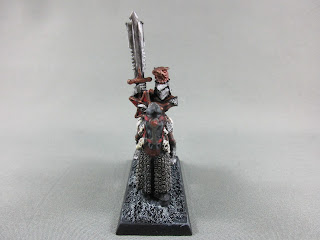 This model is the mounted version of one of Ral Partha's excellent Chaos warriors. Blog readers may recall that I painted that model some time ago - it was actually part of the collection I assembled for RPG gaming in the early '80s. 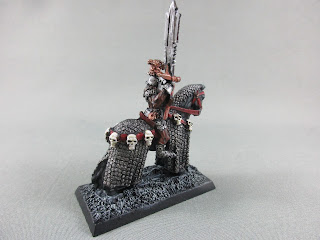 So I happened to be surfing eBay a month or two back and spotted this model offered at a BIN of $1.99 from a seller in Quebec... score! However, shipping was noted as an absolutely extortionate $14 USD... no way, Jose.

After some negotiation, I got the seller to agree to $8 shipping from Quebec to my USA post box, where some other stuff was awaiting pickup. So it ended up being cheaper to drive down to the USA to pick up this parcel from Quebec, than to have it send in Canada by Canada Post. Go figure... 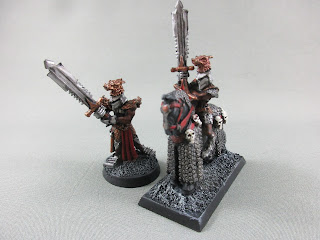 When I first skimmed the title of this post I initially thought it said 'Borat, Death Rider of Chaos' and was expecting a moustachioed guy in a mankini... Yup, I avoided san loss there.

An awesome find! I love those old Ral Partha figs.

Great work Dallas. I always enjoy your work on these classic, old school figures - and I'm impressed with your ability to track them down in the first place! This fellow looks excellent.