The Battle of Dertosa, also known as the Battle of Ibera, was fought in the spring of 215 BCE on the south bank of the Ebro River, across from the town of Dertosa. Historically, a Roman army, under the command of Gnaeus Cornelius Scipio Calvus and Publius Cornelius Scipio, engaged a similarly sized Carthaginian army under Hasdrubal Barca.

The Romans, under Gnaeus Scipio, had established themselves in Hispania after winning the Battle of Cissa in 218 BC. Hasdrubal Barca's expedition to evict them had ended in the defeat of the Iberian contingent of the Carthaginian navy at the Battle of Ebro River in 217 BC. Barca launched another expedition in 215 BC 215 BC. He moved north with some 25,000 foot, 4,000 horse and 21 elephants. The Scipio brothers massed 30,000 infantry and 3,000 cavalry to bar his path at the Ebro River. Hasdrubal's objective was to defeat the main Roman field army so that he could cross into Italy while still maintaining Carthaginian control of Spain. The Scipio brothers likewise aimed to defeat Barca in open battle to prevent his crossing into Italy and to break his grip on the Iberian Peninsula

(Historically, the Carthaginians defeat at Dertosa cost them a chance to reinforce Hannibal at a critical juncture, and the Romans gained the initiative in Hispania.)

Dallas mentioned how it's been awhile since we have done some big battle De Bellis Antiquitatis ("Mega-DBA") ancients, and Conscript Sylvain is in town for a little while, so Thursday night I organized an ancients game based upon the above-noted battle, using DBA version 2.2. For years DBA was popular locally, then people drifted away. I know of only one local person who has painted up a DBA 3.0 army. DBA 2.2 is what our group is familiar with.

Each side ended up having the equivalent of 2 complete DBA armies. We had an historical "matched pairs" encounter: the defenders were 15mm DBA Late Carthaginians, the attacking Roman side was  represented on the table by 15mm Polybian Roman armies of the mid-Republic. The figures were painted by Conscripts Frederick and Kevin (each had painted a Roman and a Carthaginian army; Kevin's figs now reside in my collection).

Brian played the C-in-C of the Carthaginians, Hasdrubal Barca, and Dallas was his subordinate (his brother-in-law, maybe?). Each Carthaginian general had an Elephant stand; Brian was hoping for great things from his elephant, nicknamed "Sparkles" for the evening. Frederick was the C-in-C for the Romans, playing Gnaeus Cornelius Scipio Calvus ("Scipio the Elder"), and Sylvain played his subordinate, his brother Publius Cornelius Scipio ("Scipio Junior"). Each C-in-C wold roll both command dice each bound, and apportion the dice as they saw fit between themselves and their subordinate.

Who would win this dust-up between two consuls of the Roman Republic and one of the scions of the uber-rich Carthaginian Barca clan?

Below, looking southward, Dallas and Brian can be seen sitting behind their deployed Carthaginians. 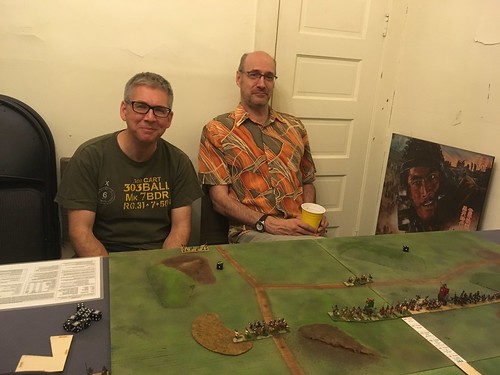 Below, Sylvain and Frederick sit behind the northern edge of the table, overseeing long lines of Roman legionaries. 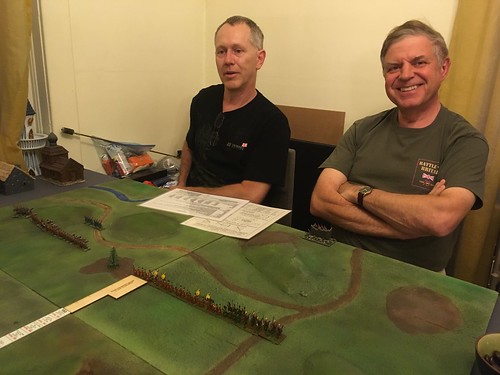 Below, closer shot of the Romans commanded by Frederick's Scipio the Elder. 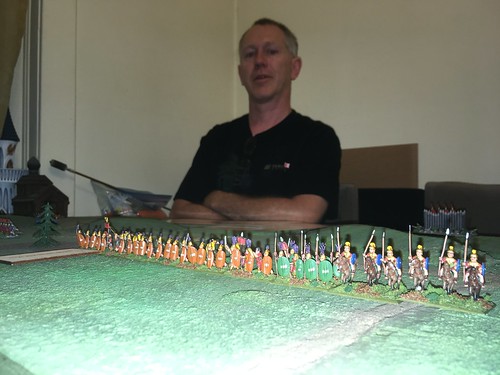 Below, looking west, both sides drawn up for battle. Frederick rolled a "1" and a "4" for PIPs. He kept the 1 as his forces were in one long line. 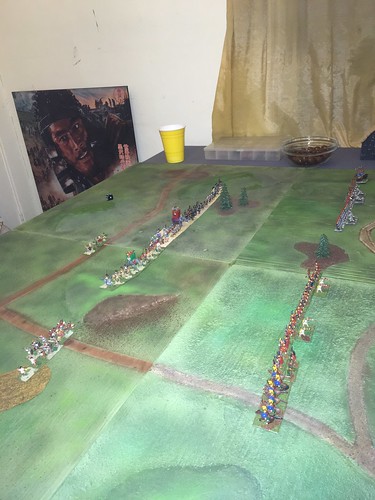 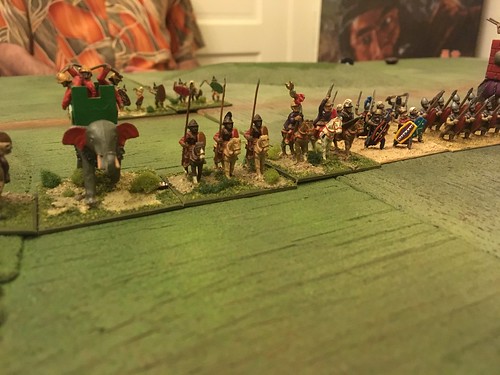 Both sides sent some cavalry to try and flank the forest seen to the far west. 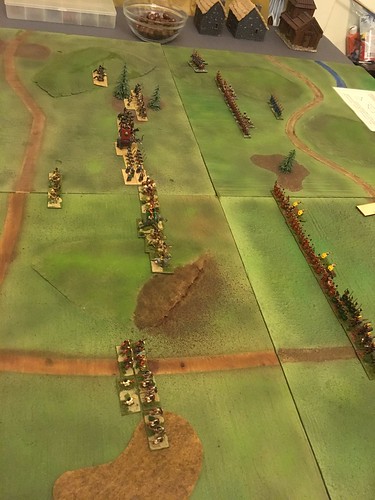 The Carthaginians divide their forces to meet the Roman lines. 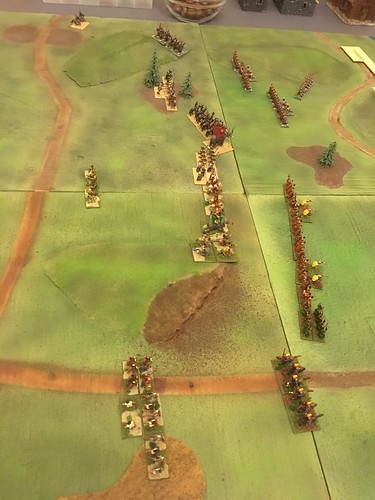 The Carthaginian eastern edge was held by Spears in ranks on the road, with their flanks anchored by a small cliff, and some light infantry in the marsh. The Roman cavalry declined to attack and these small forces shouted invective at each other all game. 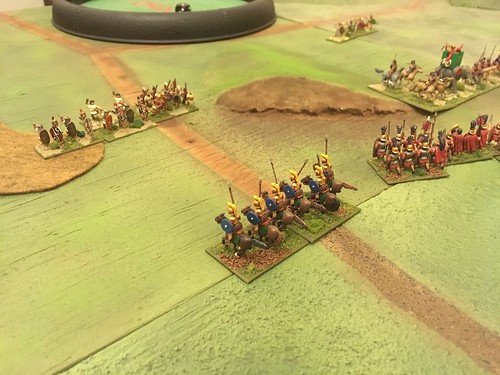 The Carthaginians seized the initiative by advancing to contact all up and down the lines. To the west some Roman Blades are in danger from the flanking Light Cavalry. 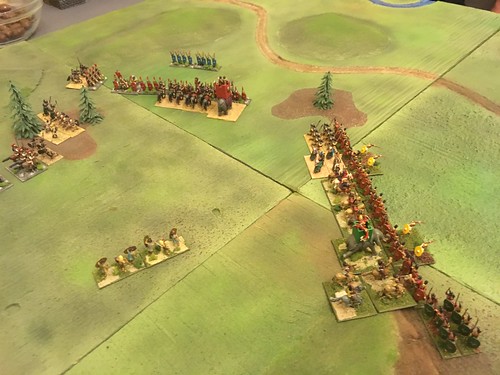 To the west, some Roman Cavalry fence with Carthaginian Auxilia in the woods. Neither side could afford to lose because of the placement of friendly units; of course their battle was a draw! 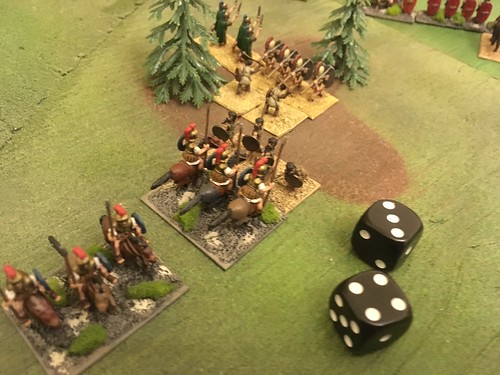 Sparkles ground down a stand of Blades and moves forward to fill the gap! 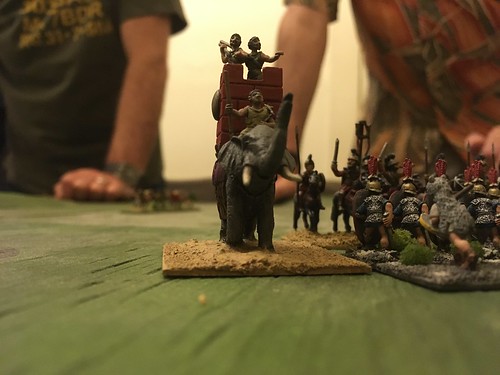 Some of Brian's Celtic Warband  tried to kill the Roman C-inC, but were slain for their trouble. The rest of the Carthaginians bounced off the Roman shield wall. 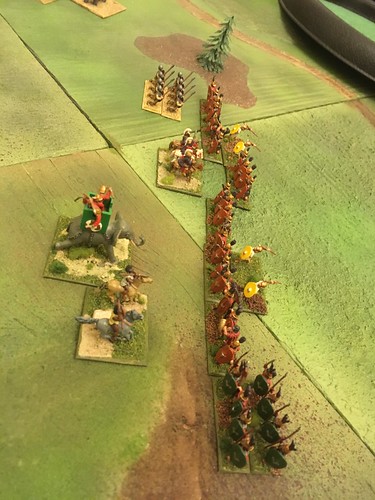 With the support of some friends, the Roman Cavalry rode the Carthaginian Auxilia down. 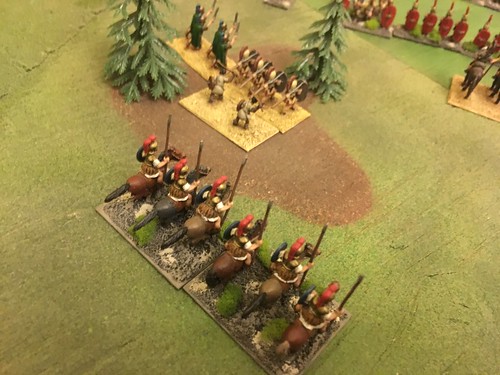 Below, some legionary Blades try and flank the Carthaginian sub commander. Dallas rolled hot and drove off his attackers. 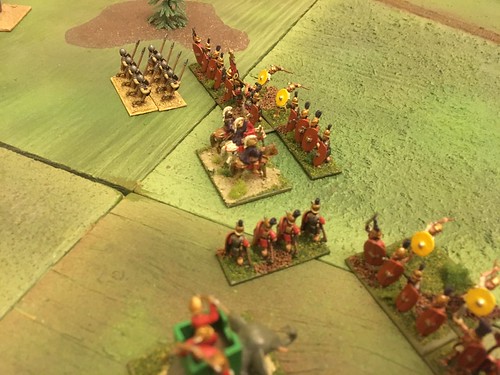 Below, the Roman players contemplate their next moves. 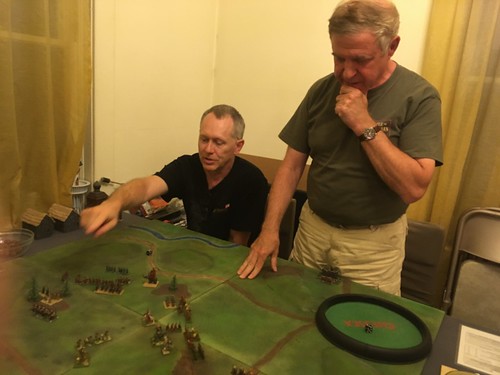 Brian's  Barca, with the help of Sparkles, tried to nail another stand of Blades who had Psiloi support, but the Romans' swordplay and javelins forced off their attackers. 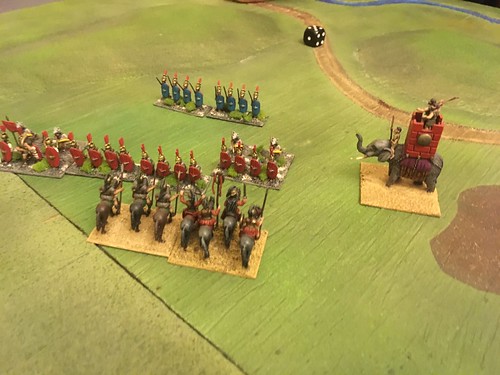 Below, in response, some Roman Triarii move to face off against Sparkles. The rest of the line advanced on the Carthaginians, pushing back Barca's stand, and destroying another stand of Cav. 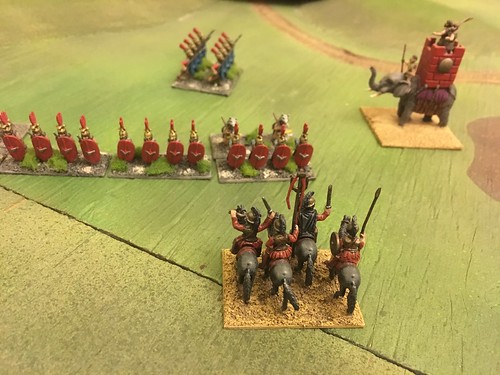 Below, a panorama of the land south of the Ebro River, at this final point of the battle. 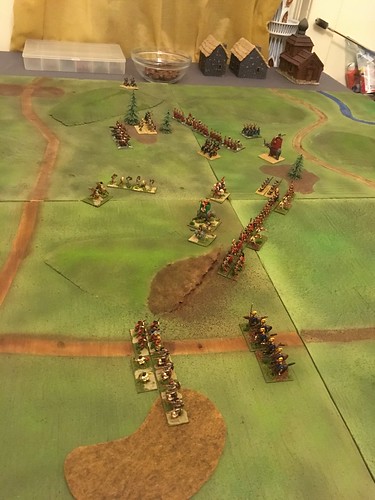 The casualties below tell the tale. Barca's half of the army reached its breaking point, and the Romans had only lost one stand so far. The Carthaginians threw in the towel, and, as in history, the Carthaginians retreated off the table. Barca somehow survived, leaving the Scipios the masters of the field. 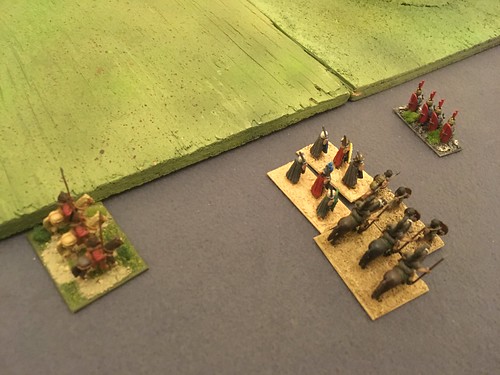 All agreed that it was fun to push around figures using DBA again. I have both Scythian and  Mongolian armies ready for cleanup and painting. The Scythians in particular would make great opponents for the various Greek Hoplite and Roman armies several of us have.


Hordes of the Things

The game prompted me to finally finish off the shields on some HotT Wood Elf Knights that I painted up and have been playing for years. Cheated a bit, using some Eldar Harlequin decals and some thin green glazes to make the white look like it was painted a little unevenly on the shields. 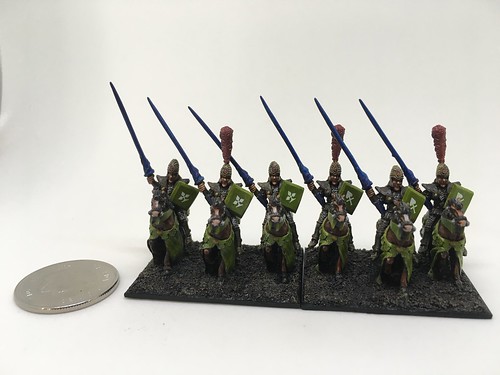 It's a fun army, with figures from Chariot Miniatures. It's constituted of: 1 x Magician General, 1 x Magician, 1 x Hero, 2 x Knights, and 4 x Shooters (and a Toad for when the Magicians' magic goes horribly wrong). 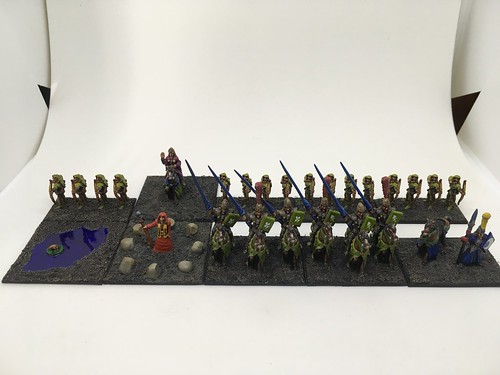 Thanks for putting that report together, enjoyed with a coffee :-)

That was a great report on a fun game, Dave! Barca retired to manage the family furniture business, I guess... "Barca lounger" - geddit??? :-)

Carthage would have more of a shout under 3.0, with Ax being 3 v Cv and Sp having side support