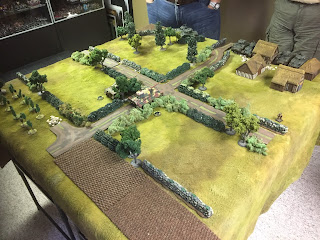 After somewhat of a hiatus, we got back to gaming at Churchill Manor last weekend with a session of Bolt Action. I'm a subscriber to the Bolt Action email newsletter (as you all should be) and since June they've been publishing a series of D-Day-themed scenarios. I selected "Crossroads" as the game for the night to ease us back into gaming mode.

The premise is pretty straightforward - in the midst of the British Operation Bluecoat (30 July-7 August 1944) the Germans are withdrawing their armoured forces. Two heavy tanks are left to hold an important road junction. Can the British tanks neutralize the armoured rearguard before the rest of the panzers make good their escape? 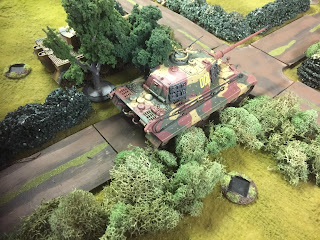 While I don't have the two King Tigers in my collection that the scenario calls for, I provided one King Tiger and one Tiger I for Conscript Sean to deploy near the crossroads. 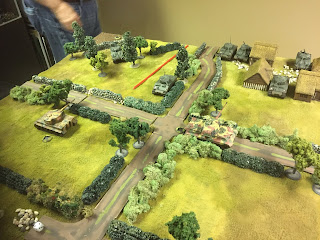 The British (five Sherman Vs and one Firefly) were deployed by Conscripts Frederick, Bill and Kevin on their start line, and rapidly advanced. The British only had four turns to destroy the two heavy tanks and that meant closing the range quickly, and grabbing flank and rear shots where possible. 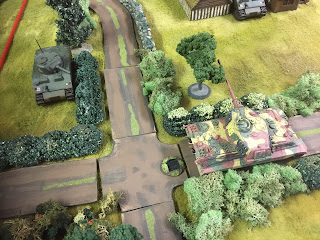 One of the little issues with the scenario was the minefields that are supposed to be deployed by the German player. The problem is that the scenario didn't specify the size or locations of the minefields, and although I emailed Warlord with this question, they've never gotten back to me with an answer. So for the game I allowed Sean to secretly place two minefields, each the size of a medium blast template. Fair enough. 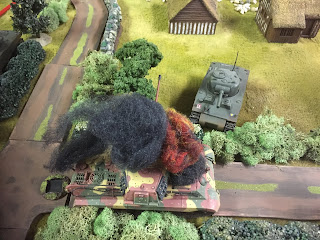 The British tanks advanced quickly to contact and a lucky shot took out Sean's King Tiger quite early in the game. 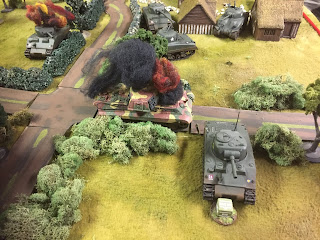 The Germans struck back quickly though as the Tiger potted a Sherman (top left). The Sherman at bottom right crashed through the bocage hedge straight into a German minefield... which caused no damage, thanks to typical Sean die-rolling. 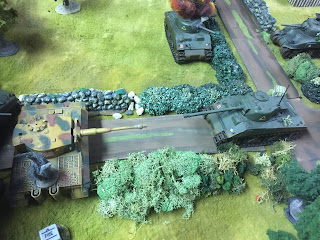 Meanwhile on the other flank, the Firefly has whizzed up the road into the other minefield placed by Sean on the road just to the left of the crossroads above. Of course, it goes without saying that the mines caused no damage, and the Firefly scored an immobilizing hit on the Tiger. 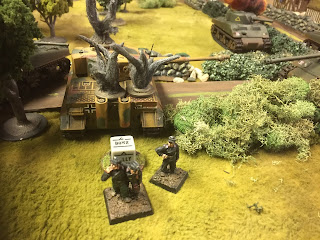 Surrounded now by Shermans and after their Tiger suffered another immobilizing hit, the remaining crew thought discretion to be the better part of valour and abandoned their tank. Even though both of his tanks were burning, Sean stuck it long enough to score a victory on points. Well done Sean!

Thoughts on the game... it was fun to get back to good old Bolt Action after a bit of a layoff and the game has galvanized me into action in getting some models finished and others purchased... specifically some American and British crew for my Shermans with gaping hatches. The game looked great and was good for a laugh but after deploying the models, the rather crowded table had me thinking I should have used 15mm models on the 4'x4' table instead. I think they would have looked cool with the tall bocage and would have avoided the 40K-style "drive closer, I want to hit them with my sword"/clashing gun barrels close-quarters combat we saw in this game. Next one will be on a 6'x4' with some infantry, I promise! :-)
Posted by Dallas at 11:34 PM

Sad to miss seeing Sean; one of the consequences of travelling for work.

Great looking game guys! And so glad to see Sean is maintaining a consistent approach to his luck with die rolling :)

How does one sign up for the Bolt Action email newsletter? Thanks.

Great game guys and kudo to you Dal, in putting it on. While the 28mm kit looks very pretty and impressive, I agree that 15mm might give a more in-scale experience.

Thanks for the comments lads! @Steven Parillo - you can sign up for emails from Warlord Games at this link: https://www.warlordgames.com/home/newsletter/ Cheers!