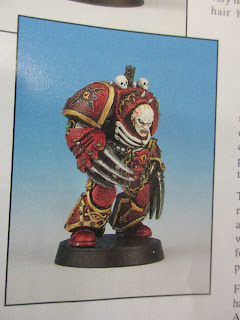 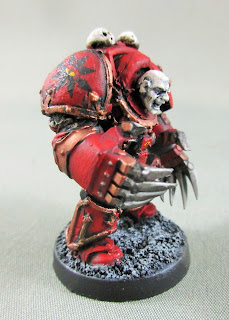 Here's another of the small projects I've undertaken in the past couple weeks, just to get back into the habit of swinging a brush.

As blog readers will know, we had a trip earlier this summer back to England, which included a stop in Nottingham and vicinity. And Nottingham means Games Workshop, which means Warhammer World. And one of my favourite-ever things at Warhammer World is the famous "Death of Sanguinius"/Horus vs. the Emperor diorama piece by Mike McVey. I'd snooped around the web off and on for several years trying to get more detailed shots of the models, with a view to trying my own hand at a conversion someday, but without much success.

And then, amazingly, in response to my "Ye Olde Trip to Nottingham" post, blog reader Mikko pointed out that White Dwarf #183 featured an article by Mike McVey himself detailing the construction of the diorama. Well, I happen to have that issue in my collection so off I went to soak it in...

Consequently, I decided that a replication (as far as reasonably possible) of McVey's Horus conversion might be a feasible afternoon project. Obviously I wouldn't be able to do this with complete accuracy as
So I determined that I'd do a "close enough" job to try and convey the flavour of the model using bits that I had handy. 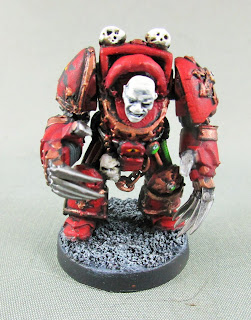 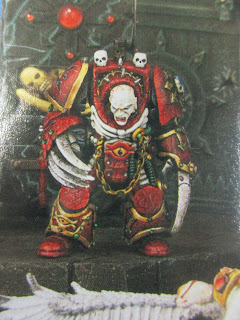 First of all, I started with a metal Chaos Terminator body. I carved off the helmet, and severed the arms below the elbow joints, as I wanted to re-use the shoulder pads. I used a metal head from the bits box (can't remember what third-party vendor it came from) and sculpted the deformed-looking skulls from greenstuff. The cowl is from greenstuff as the original got a bit messed up when I cut off the helmet. Looks slightly ropey but good enough from 3 feet away. The chain came from the bits box, as did some guitar-string cabling. 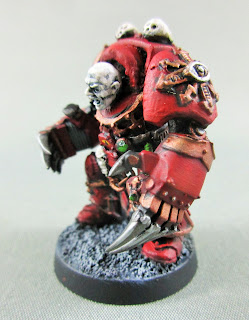 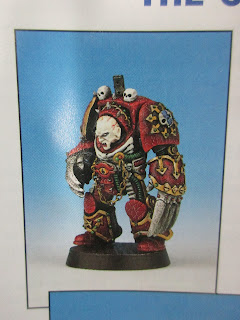 The massive lightning claws are the signature of this model. Fortunately the bits box came to the rescue again as I had the gloves left over from the Cataphractii Terminator sprues that came in the "Betrayal at Calth" 30K game. Two suitable items were selected and carved down to fit.

The decal on his right shoulder was an ace find - it's from a 1992 Chaos decal set I had in the decal folder. I'd tried to freehand the design at first but it looked terrible, so decals to the rescue. I painted in the yellow parts of the Eye of Horus and the red "Eyebrow of Horus" on the decal.

Add an easy-peasy paintjob and there you have it - one Warmaster circa 1995. Not very impressive compared to the current model so amazingly painted by Conscript Greg, but fun for an afternoon project and homage to the talented Mr. McVey.

Wow, you totally had me fooled at first as I thought it was the same figure! Great work Dal.

Thanks man - I wish! But it was fun to create a "reasonable facsimile" nonetheless. If I had a bit more skill with the greenstuff it would have been good to model some of the brass trim on the gloves, as well as the bony "ribs" on Horus' torso...

Looking great there! Glad my little tidbit of info was useful, made me happy :)

What a great idea and a worthy homage! Now you’ll be building the rest of the diorama I assume? ;)