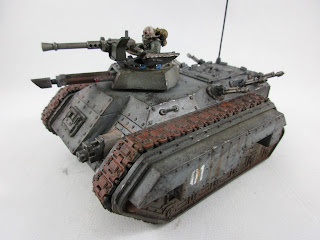 It's been all-Renegades-all-the-time lately on the old painting table, and vehicles have been among my favourite subjects to paint lately. This is an old-style Chimera armoured vehicle that serves as a command transport for the Renegades. It dates back to around 1995, and is the first version Chimera with separate track links, cursed by many ;-) 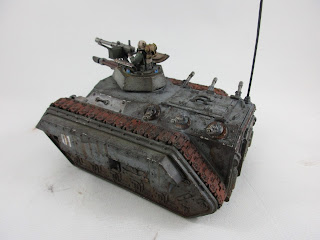 For being 20 years old, this design still seems fresh to me, unlike the Leman Russ, which to my eyes has dated somewhat. 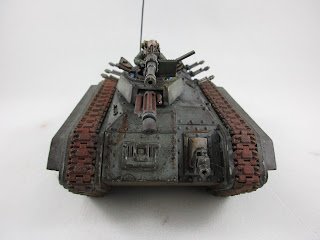 Still a cool-looking piece of kit. It was built mostly from the box, with multi-laser and heavy bolter armament. 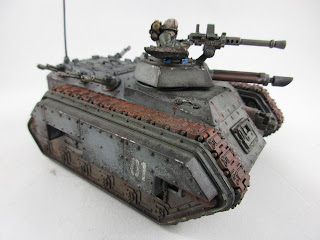 I had a heavy stubber in the bits box so I carved that up to mount on the cupola. The gunner is an amalgam - Forgeworld Renegade torso with standard IG/AM lower body and arms. "01" tactical numbering indicates a command vehicle. 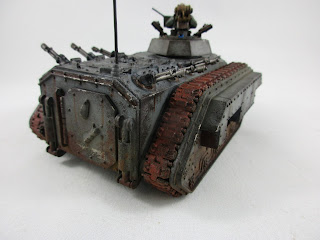 Rear door is non-functional on this model, primarily because there's no interior detail in the kit and I'm too lazy to scratch-build it ;-) 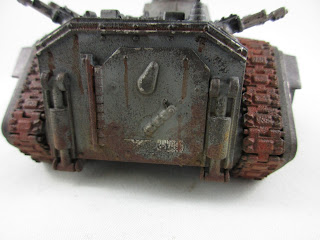 Some heavy weathering down low on the chassis. I really like the Imperial serial number decals and try to use them on every Guard vehicle kit I build. 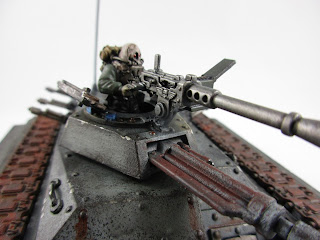 Again, the vehicle mounted heavy stubber has to be one of the coolest accessories GW has ever made. I just love the brutality of the look. In this case it nearly outdoes the main armament for looks cool factor!

Watch for more Renegade vehicles coming soon, including some air power to address the Valkyrie gap... :-)
Posted by Dallas at 2:18 PM

Great weathering job! I agree, the heavy stubber has a very high LCF. If GW sold it as a $3-5 standalone "bit" (maybe with an optional tripod and extra ammo), I bet they would sell tons.

It was fun watching this vehicles occupants get kicked about by artillery at LegioCon.

Great work on the model Dallas!

That is some top weathering.