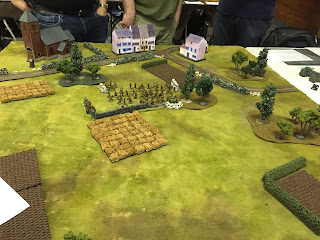 In addition to helping Conscript Greg with his amazing 40K game at LegioCon this year, I also volunteered to run an early-Great War game as well. Here is the description:

"The late summer of 1914 was marked by innumerable encounter battles between the German army and the French, Belgian and British forces operating on the Western Front. The game focusses on one of these battles between the Germans and the British Expeditionary Force leading up to the pivotal Battle of Mons in August 1914. Can the plucky "Old Contemptibles" withstand the furious onslaught of the German infantry, Uhlan lancers and even armoured cars? Or will the Huns triumph and drive the BEF back into the Channel? 28mm figures are supplied, rules are "The Great War" by Warhammer Historical.  6 players" 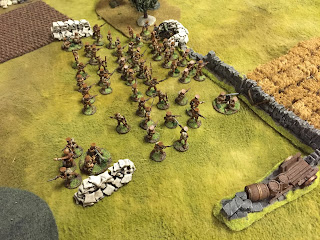 As noted, I used the old tried and true Warhammer "Great War" rules and the "Over the Top" supplement. The scenario we played was "Fighting Retreat", where the defender deploys in a box in the middle of the table, and must exit units off the table. The attacker can hold up to half his force (which totals twice the points of the defender's) in Reserve, and deploys the rest on the opposite short edge. reserves may enter the table on any edge but the defender's home edge.

The forces comprised, for the British defenders, a two-company battalion with three attached machineguns and an 18 pdr field gun. The Germans deployed two battalions each of two companies, plus three machineguns, a cavalry squadron of 12 Uhlans, and two armoured cars. They left one company, the cavalry, and the armoured cars in Reserve, and deployed the rest of the infantry. The models used in the game are all from Foundry's Great War range, with the exception of the Ehrhardt armoured cars (Barrage Miniatures) and the German and British commander models (Paul Hicks's Mutton Chop Miniatures). Some of the Germans were from the collection of our late friend Glenn Shott and I thought of the game as being somewhat in honour of him. 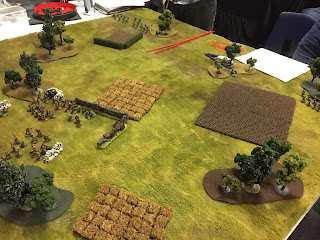 Here's the initial dispositions. German long-range machinegun fire was effective against the British artillery and machinegun. The grey wave rolled forward as the British prepared to withdraw from their positions towards the town behind them. 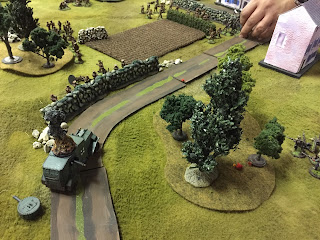 On turn 2 the Germans were lucky to have all their Reserves appear. An armoured car, an infantry company, and the Uhlans appeared on the British left, while the other armoured car swept in from their right. The unlucky armoured car was torched by "five rounds rapid" fire from the infantry behind the stone wall. Armoured cars in these rules are not proof against small arms fire by any means! 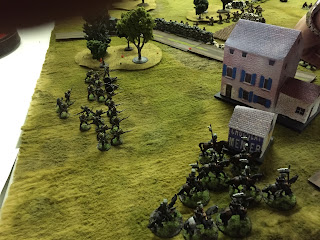 Infantry and Uhlans prepare to assault the British. 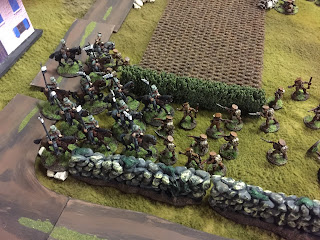 Uhlans sweep in! We had a bit of a moment here as we initially played the assault out, the Uhlans absolutely annihilating the British infantry. However, we forgot to apply the Overwatch rule from Over the Top (my fault). Once this was pointed out we rolled back the clock and replayed it with a completely different result - the Brits lit up the Uhlans on their charge and forced a Morale check, which the Uhlans failed, and they failed to make contact with the main British body. The Uhlan Squadron command troop did contact the British company command section, though, and destroyed it utterly. 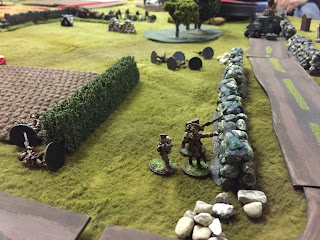 The infantry company that beat off the Uhlans' charge made it off the table, the first of two units the British needed to exit in order to win. The battalion command group is in the foreground above; you can just see the other German armoured car in the background. 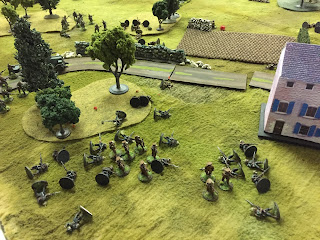 British infantry platoon charges and destroys a German platoon as more Germans approach from behind the woods. 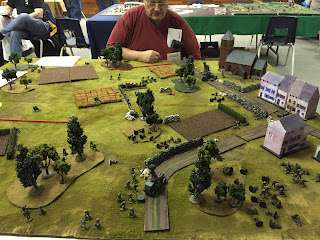 Conscript Bill contemplates a strategic victory but a tactical defeat, as the second British unit escapes the Hun's noose. It was a fun game with much carnage, as you can see from the toppled casualties all over the field. I think the game looked good and the guys had fun - thanks to the Conscripts who came out to play, and Mac, a LegioCon regular who played with us as well. 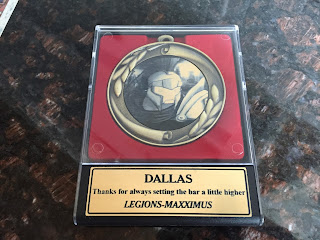 This was a super-nice surprise for me at the end of the day, as I scrambled to clear away the game (I had to catch a plane for a work trip later that afternoon).

Garth of Maxx Collectibles, one of the prime movers behind LegioCon, said a few very kind words and awarded me this nice token of their appreciation for the games we put on at the Con. It was really nice to be recognized for our participation and I appreciated that a lot. Thanks LegioCon and see you next year!
Posted by Dallas at 3:09 PM

Superb game and set up. A fighting retreat always makes for a tough game. You've done your friend proud.

It was a spectacular game dude - well done!

what a great looking game, WW1 seems overlooked in favour of WW2, so great to see it out there.