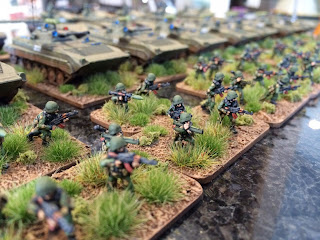 This is the second part of the "points bomb" I dropped into the Analogue Hobbies Painting Challenge over the weekend - a WarPac motor rifle company mounted in BMP-2 infantry fighting vehicles.  There is also a BRDM-2 recon vehicle.  The BMP-2s are multi-part plastic kits from Battlefront.  The infantry are from Eureka.  The BRDM is a metal kit from QRF.
Multi-part plastic kits make me grumble quite a bit, particularly for 15mm size vehicles, but I have to hand to Battlefront, they came up with a really, really nice kit.  Assembly was tricky, but pretty straightforward - and that is by the standards of a total grouch like me.  Each box has five models which you can assemble as either a BMP-1 or BMP-2 (and if you are one of those ninjas with the little magnets, you could theoretically make them as both).

I did encounter one confusing element when approaching these model kits, relating to the IR lamp to the right of the cannon on the BMP2 turret.  Here are examples of the lamp from some photos: 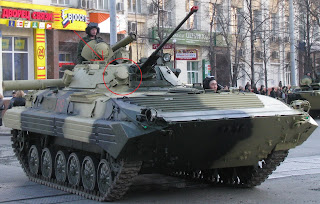 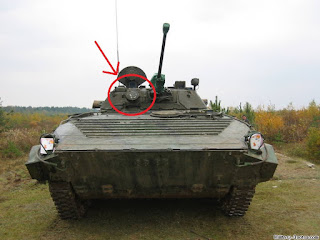 But when I checked over the instructions on the assembly, it didn't seem to have one... 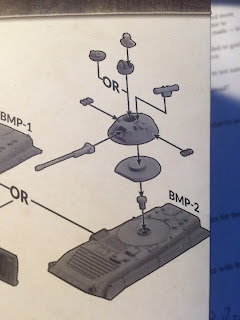 And when I checked the photos in the Battlefront products, it looked like there was no lamp beside the cannon either... 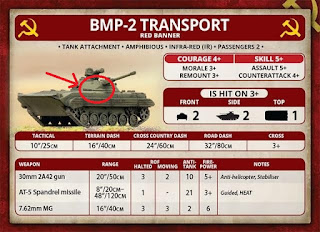 But the actual part is on the model sprues, and it fits quite nicely beside the cannon. So I don't know what sort of mixup may have happened with Battlefront - or perhaps I am mixed up, and maybe not all BMP-2s have that lamp beside the cannons? Perhaps a sharper treadhead out there can enlighten me.  At any rate, it was a small bump, and I was able to figure it out after only messing up one of the models :)


The infantry are 15mm sculpts of modern Russian troops from Eureka.  While Battlefront has apparently "released" their own line of 15mm modern Russian troops - and they do look quite sharp in the pictures - my order for these figures remains nowhere to be seen.  I got tired of waiting, so I decided to go with the Eureka Russians instead.

The Eureka Russians are, I believe, intended to represent the Russian troops who participated in the initial Chechen War in the early 90s, and so their kit is not the same as the troops from the era of "Team Yankee", which is late 80s.  The Eureka Russians are also lacking a sculpt with an RPK squad automatic weapon.  But with 15mm figures, it looks close enough to me - in fact, I'm not sure how different an RPK would look as compared to an AK-74 in 15mm.  The Eureka range has troops with RPG-7s, RPG-18s, AKs with underslung grenade launchers, and also things which haven't found their way into the "Team Yankee" rules as yet - HMGs, mortars and the terrifying automatic grenade launchers!  It's a great little range, and I quite like the look of the figures.

"Team Yankee" gives three different sizes for Motor Rifle Companies in the Russian force lists - this is a middle sized one - seven AK-74 stands, two PKM LMG stands, and six RPG-7 stands.  I've also done one battalion command stand.  And there are 10 BMP-2s to have the whole lot roll into battle.

The last little bit is the BRDM scout car.  Again, no stats or rules for this vehicle in "Team Yankee" as of yet, but I'm sure it won't be too long, and it won't be hard to bodge some in the interim.  This is a little kit from QRF - the quality there is hit and miss, but this one was not too bad.

Here is a group shot of the entire force from this past submission:

The delays from Battlefront on the second wave of "Team Yankee" products are significant - even by their own standards.  I'm not sure what the hold up is, but if you are impatient like me, I recommend Eureka, and you can also try Khurasan, who has two different versions of modern Soviet motor rifle troops in 15mm.

As much as I enjoy tank battles, having infantry for both sides I think is important to round out the game, so I'm now trying to work on a solution for the NATO mechanized infantry. But I'm looking forward to getting these guys on the table soon!
Posted by Greg B at 8:00 AM

Stunning job Sir. I love the group shot at the end, such a wonderful achievement.

Great work on the painting, duder.

The IR light is part and parcel with every iteration of the BMP-2 as far as I'm aware. The lack of it in the pictures and instruction is just an error.

Having looked at the BF soviet troops up close I can say that the Eureka ones are definitely superior in terms of both cast and sculpt style. They also are sporting slightly later uniforms which allow for camo painting which I am always in favor of.

If you are hard up for US infantry, I suggest Peter Pig's US line. Its equipment is in a hazy zone between the late 80s and early 2000s, with the only thing missing being the ATGM option. If you can handle the constantly gaping mouths used in all PP models, the sculpts are otherwise crazygood.

Thanks very much guys!
@tacobat - funny you should mention Peter Pig, as I've been working on exactly that...

Nice stuff Greg, I do like the lens effect you've taken the time to do, really makes them pop.