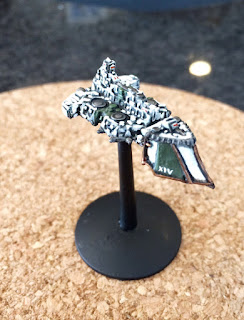 Another Bonus Theme Entry for Curt's Analogue Hobbies Painting Challenge.  This theme was "nautical" - and while it is not as odd as "l'amour" or as painful as "defensive terrain", "nautical" is still an area I avoid.  In fact, the one thing I am less motivated to paint than terrain is nautical stuff.  Nothing against it - ship games are awesome! Just not my cup of tea.  These bonus themes are open to wide interpretation, however, and so I thought I might be able to tie "nautical" to one area where I do pick up the brushes - 30k, and space gaming! 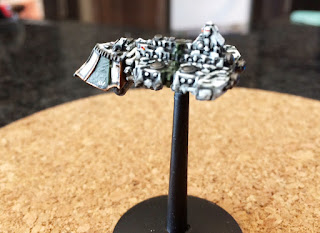 We all have models that languish in the "pending stage" - or at least I like to say we all do, so I don't feel like such a dunce about my own hoard - but this model was particularly patient - it has been waiting for six years!  Oh well, at least I got to it eventually. 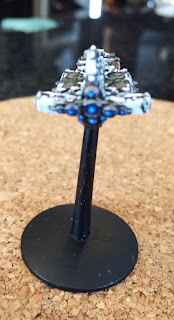 So here is the frigate "Eisenstein", painted in the colours of the Death Guard. Horus Heresy fans will recall that one of the things that made the Space Marine Legions so scary was that - in addition to their massive size, terrifying weapons and primarch leaders - they had their own war fleets! A ship like the "Eisenstein" hardly stands out in the Legion war fleets, packed as they were with scary capital ships - but the "Eisenstein" is notorious in that it was the vessel seized by loyalists who escaped Horus' fleet at Istvaan to raise the alarm about the Heresy.

In fact, as GW has started to mine the Heresy story more and more over the years, a novel was even published about the Eisenstein's escape: 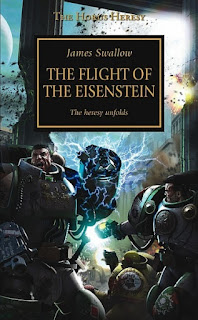 Of course, there is no actual model for the "Eisenstein" or any other 30k era ships.  This model is, I believe, a "system monitor" from GW's vanished "Battlefleet Gothic" game.  Of course, I hope this model shows there is no reason some selective painting cannot be employed to create 30k-era fleet engagements with Battlefleet Gothic models.

While I'm not about to launch on a project connected to this right away, I have managed to source a few old cruisers which I hope to paint in Legion colours, to keep my ambition/dream of one day running a series of linked games which begin with a fleet engagement, move to a game of Epic, and finish with a game of 28mm 30k...one day perhaps.  A single escort-sized model for Battlefleet Gothic hardly took any time to paint, but I'm too locked into "Team Yankee", Epic 30k and 28mm 30k to divert into a bunch of Gothic ships for now.  But sometime... 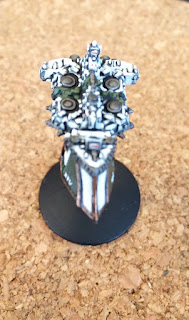 There is one theme round left in the Challenge - "Gambler/Risk Taker".  If I can make that round too, I will have managed to get something submitted for all of the Bonus Themes this year, which will be a first for me - and a surprise, as I had expected I would end up missing nearly all of them.  But I haven't accomplished anything yet - I do have some models lined up for that last bonus theme - just need to get them painted in time.
***
Be sure to check out the excellent submission by Byron as well - some Langton Napoleonic-era sailing ships - incredible stuff.  I hope he will post them here on the Fawcett Blog, but you can go see (and vote for) them now at this link.  Incredible work Byron!
Posted by Greg B at 8:33 AM

Such a fabulous piece, the after burn of the engines is particularly good.

Looks great - I have a box of Space Marine ships for Battlefleet Gothic, I guess I should get to work too!

Love the design of the old BFG ships! Too bad they stopped making the game and minis. Nice work on the ship!