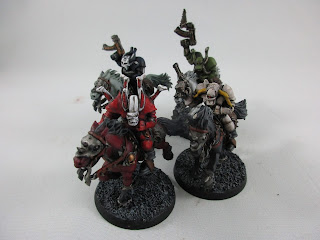 Well they were given the grapes that go ripe in the sun
That loosen the screws at the back of the tongue
But they told no one where they had begun - the four horsemen! 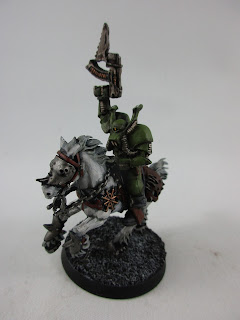 I watched as the Lamb opened the first of the seven seals. Then I heard one of the four living creatures say in a voice like thunder, “Come and see!” I looked, and there before me was a white horse! Its rider held a bow, and he was given a crown, and he rode out as a conqueror bent on conquest.
( Revelation 6:1-2) 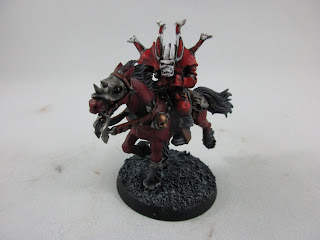 When the Lamb opened the second seal, I heard the second living creature say, “Come and see!” Then another horse came out, a fiery red one. Its rider was given power to take peace from the earth and to make men slay each other. To him was given a large sword.
( Revelation 6:3-4) 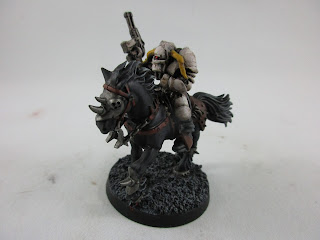 When the Lamb opened the third seal, I heard the third living creature say, “Come and see!” I looked, and there before me was a black horse! Its rider was holding a pair of scales in his hand. Then I heard what sounded like a voice among the four living creatures, saying, “A quart of wheat for a day’s wages, and three quarts of barley for a day’s wages, and do not damage the oil and the wine!”
(Revelation 6:5-6) 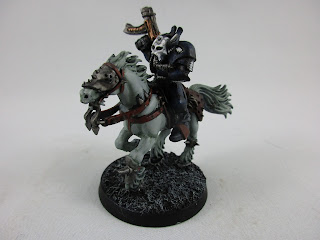 When the Lamb opened the fourth seal, I heard the voice of the fourth living creature say, “Come and see!” I looked and there before me was a pale horse! Its rider was named Death, and Hades was following close behind him. They were given power over a fourth of the earth to kill by sword, famine, and plague, and by the wild beasts of the earth.
(Revelation 6:7-8)


Here's a project that sat on my painting desk for a loooong time before I finally put the boots to it and got it done.

A couple years ago (!) I was at the FLGS looking through a bits box, and found four Chaos Renegade torsos, from the old Citadel "Mounted Renegades" set. I thought these were super-cool and instantly thought "the four horsemen of the Apocalypse!"  I was also in the process of accumulating old school Chaos Space Marines for a Rogue Trader warband of some kind, and thought these would fit well.

What to use for mounts? Well, I'd been working on the Renegade Cavalry at the time and had originally bought Warhammer Fantasy Chaos Marauder horses for them. However, those horses were a bit *too* Chaos-like for the Renegade Cavalry, who after all are just supposed to be Guardsmen torqued about 30 degrees Chaos-ward, not full on raving loonies of the Chaos Gods. So those horses were set aside in favour of regular Pistolier horses. But the Marauder horses seemed to fit perfectly for this project, so I used them.

Legs were another challenge, since the Chaos riders came as torsos only and I had but one set of proper legs in the bits box. Chaos Marauder Horsemen to the rescue again; I used those legs with some mild greenstuff work to fit the metal torsos. Et voila, as they say - conversion complete.

So they sat on my desk, unpainted, for over a year, until this week. I based the paint schemes on the Four Horsemen of the Apocalypse and incidentally, on the four Chaos Powers.

On the white horse we have Conquest/Pestilence. Nurgle, obviously. The red horse bears War, the representation of the Blood God, Khorne. Famine was tougher. But being the God of Pleasure, and therefore of starving supermodels, Slaanesh gets the nod. This leaves Death on his pale horse - Tzeentch, the Changer of Ways. Done!

Now, to get to the rest of that warband...

Congrats on getting these guys finished Dallas. They look great!