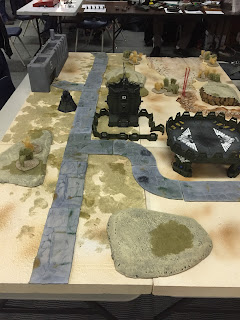 Two weekends ago, I assisted Conscript Greg with his outstanding Warhammer 40K game staged at LegioCon, a local tabletop gaming event that we have attended and hosted games at pretty much since it began. Above, you can see Greg's amazing desert terrain with my Imperial Bastion, LED Skyshield pad, and bunker/wall complex. It did look good! 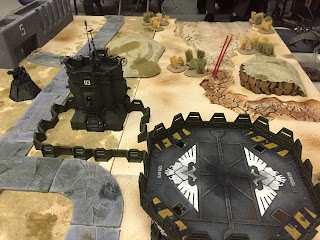 We came up with a scenario for my Chaos Renegades and his Elysian/Vostroyan Imperial Guard loosely based on the Siege of Vraks from Forgeworld's "Imperial Armour" book series. Here is the blurb:

As an Imperial Colony is overwhelmed by a revolt, the consular guard make a final stand to protect the Imperial governor at his estate.  And they hope Elysian drop troops will arrive in time to save them?

The game is set in 813 M.41, early in the 17-year siege of Vraks, an Imperial armoury world that's essentially a weapons locker and staging area for the Imperial Guard.

The Apostate Cardinal Xaphan marshalled hordes of fanatical Renegade followers on Vraks, including uncounted regiments of the Imperial Guard stationed there. Our game will depict part of the battle for the Citadel on Vraks, with loyal Guardsmen defending to the last, hoping against hope for rescue from an airmobile elite Guard unit operating in the area. Those troops have a different objective, however: rescuing the Imperial Commander-Governor of Vraks and ensuring that the arming codes for the virus bombs remaining in the armoury don't fall into Renegade hands. 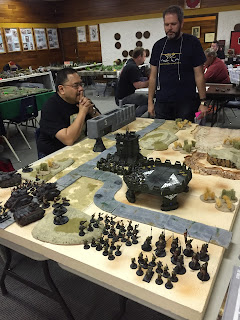 Conscripts Dave and Greg survey the bleak terrain of Vraks. The Renegade legions of Cardinal Xaphan are seen at bottom; they include a troop of Leman Russ tanks, a Medusa self-propelled howitzer, a squad of Ogryns, a large mob of workers, a penal squad, a troop of Renegade cavalry (!), and a platoon of Renegade guardsmen with a command squad in a Chimera. Their objective, the Imperial commander with the virus bomb codes, is in the Bastion at centre, defended by a couple squads of Vostroyan honour guard. 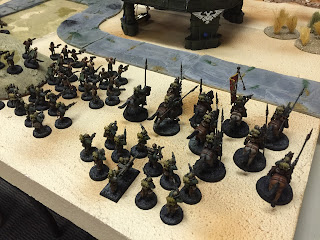 The Renegades were lined up and raring to go... 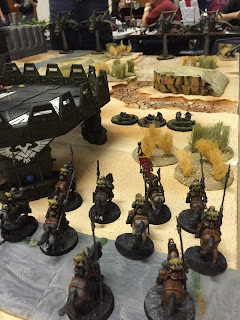 As the Death Riders surged forward, a squad of Elysian heavy bolters deep-struck into position to light them up. And they did... 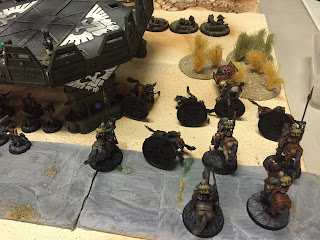 ...but while the HBs decimated the cavalry, four or five of their number survived to charge in, and their explosive-tipped hunting lances made short work of the Elysians, wiping them out to a man. 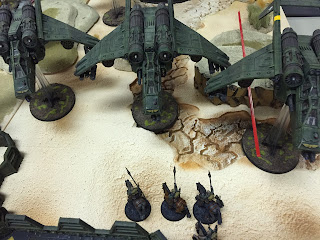 Unfortunately, after they swept over the Elysians, the surviving troopers faced this demoralizing prospect... yes, they all died :-( 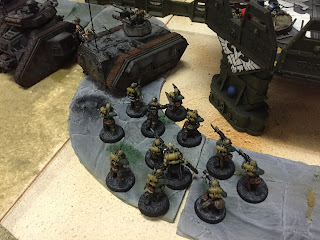 Meanwhile, in the centre of the table, the Renegade guardsmen swept forward past the Skyshield defended by a Vostroyan squad. 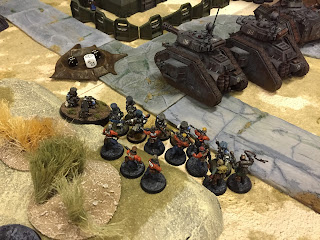 On the left, the Vostroyan defenders of the Bastion, filled with holy fervour, leapt over the barricades and charged the penal squad! A clever move, as this bought time for the Imperial commander to flee towards the Elysians approaching from their table edge. 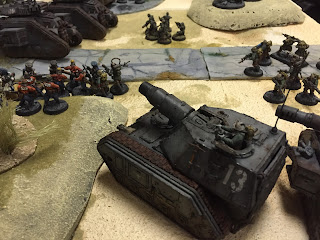 The donnybrook between the Vostroyans and the Renegades continued for most of the remainder of the game. But meanwhile, the Imperial commander was getting away...! 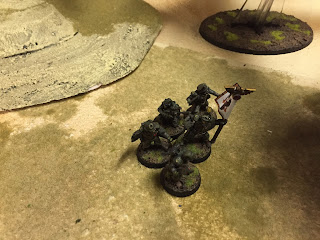 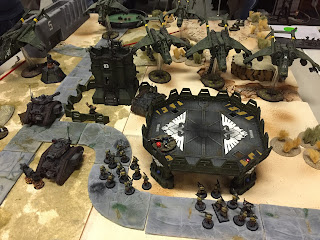 Elysian flyers crowded the skies as they arrived from reserve, spewing death, destruction, and Elysian drop troops. You can just make out the lone surviving Ogryn Bone 'Ead on the nearside of the Bastion, just past the defence line. He will figure largely into the story later... 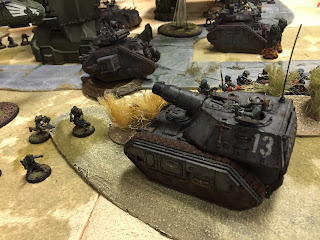 The Medusa in action. Jeff, a young fellow who joined us in the game, showed appropriate Renegade spirit as he insisted on dropping large templates alarmingly close to our own models...

This mostly went OK, until a Breacher shell landed on the Renegade command squad that had just deployed from its Chimera transport. The result was predictable, most of the squad died, leaving just the detachment commander and standard bearer alive, and pretty upset ;-) 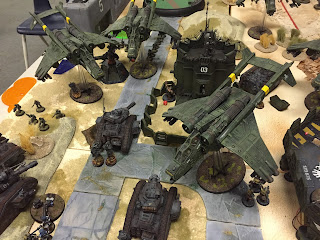 A target-rich environment, to be sure. Unfortunately I'd left the Blight Drones at home and the Renegades had no anti-aircraft capability. This sounds worse than it was, though, because the mission really required boots on the ground and the flyers were just chrome. 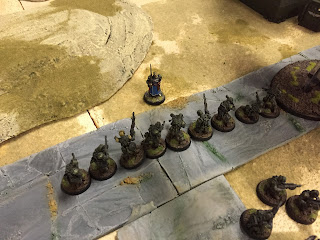 Elysian drop-troops deploy from a Valk, ready to grab the commander. 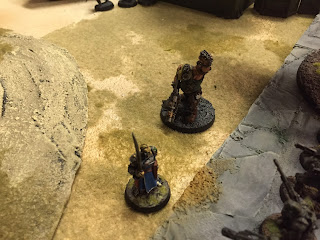 But what's this! On the last turn the Ogryn Bone 'Ead emerged from the backfield and made a dash for the target... he needed to roll 11 or 12 to make the grab. The first die came up a six! Then the second... a three :-( So close!

So the game ended in a draw...? Yeah, that's it. The Renegades failed to capture the virus bomb codes, though, and we presume that the Imperial commander was the subject of a battlefield execution by the Elysians. Life is cheap in the 41st Millennium and as they say, no matter what happens, "you will not be missed"...

Thanks to LegioCon for inviting us to bring out our game, to Conscript Greg for putting it on, Conscript Dave for his copious 40K rules knowledge and infectious sportsman spirit, and to Gabriel and Jeff for playing it with us, we hope you had a good time.

Great looking game guys! I really like the look of those cavalry figures and that landing pad never fails to impress.

This was a lot of fun - a huge "thank you" to Dallas for bringing his awesome stuff for the game, and also to Dave V for participating - his deep knowledge of the 40k rules, and tremendous enthusiasm for the scenario and the setting were terrific.

Also enjoyed the folks who came out to play - particularly the near-suicidal aggressive use of the Medusa!

fantastic looking game, especially with the myriad of miniatures from different lines and release dates! Who'd be an imperial commander?